Imagine staying in one of the luxury hotels in Bandung: enjoying the top-notch hotel facilities such as spa and massage, swimming pool (some hotels provide heated pools), kids club, fitness center, beautiful landscape, great photo spots, rooftop restaurants, even a pet inn for your beloved cats and dogs!

In terms of location, you will find these luxury hotels in Bandung, either right in the downtown or the upper area of Bandung overlooking the city.

During the COVID-19 pandemic, the concept of a staycation is blooming. Staycation means enjoying your holiday in the hotel since most of the tourist destinations are closed. Having all the facilities and beautiful views, the luxury hotels in Bandung become a perfect choice for a staycation.

So, without further ado, here are the top eleven luxury hotels in Bandung, ready to pamper you :)

1. The Trans Luxury Hotel in Bandung

In addition to the 280 spacious guest rooms and suites, the highlights of Trans Luxury Hotel are the 18th restaurant and lounge with views of Bandung, the spa, the kids club, and the swimming pools. They are heated swimming pools with a white sandy beach, lap pool, and kids pool with slides. You also can relax in the sun lounges, in the jacuzzi, or enjoy the snack and drinks at the sunken bar. 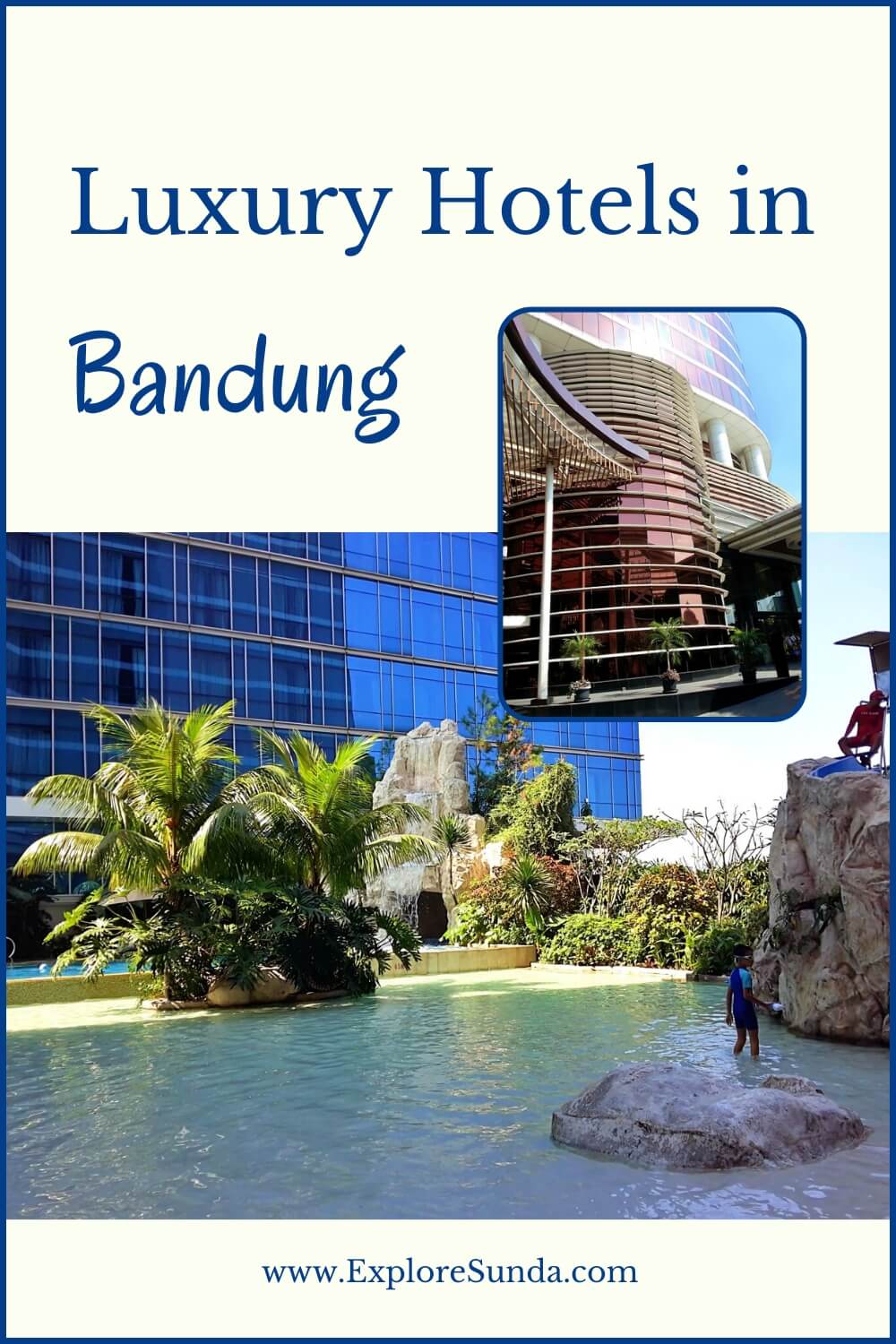 The Papandayan is a well-known hotel in Bandung during its thirty years of operation. It was temporarily shut down in 2009 for a sizable renovation and then re-opened in 2011 as a five-star hotel, complete with the facilities to pamper its guests. Among them are: spacious guest rooms and suites, full buffet breakfast and buffet dinner, spa, and a tropical garden complete with a fish pond and waterfall.

Situated at Gatot Subroto street no. 83, Bandung, there are many places of interest nearby. For example, the Trans Studio Bandung, the Asian African Museum, Alun-Alun (city square), Braga Street, and Saung Angklung Mang Udjo.

The only discomfort some guests mentioned was the noises from outside that seeped into the guest rooms. 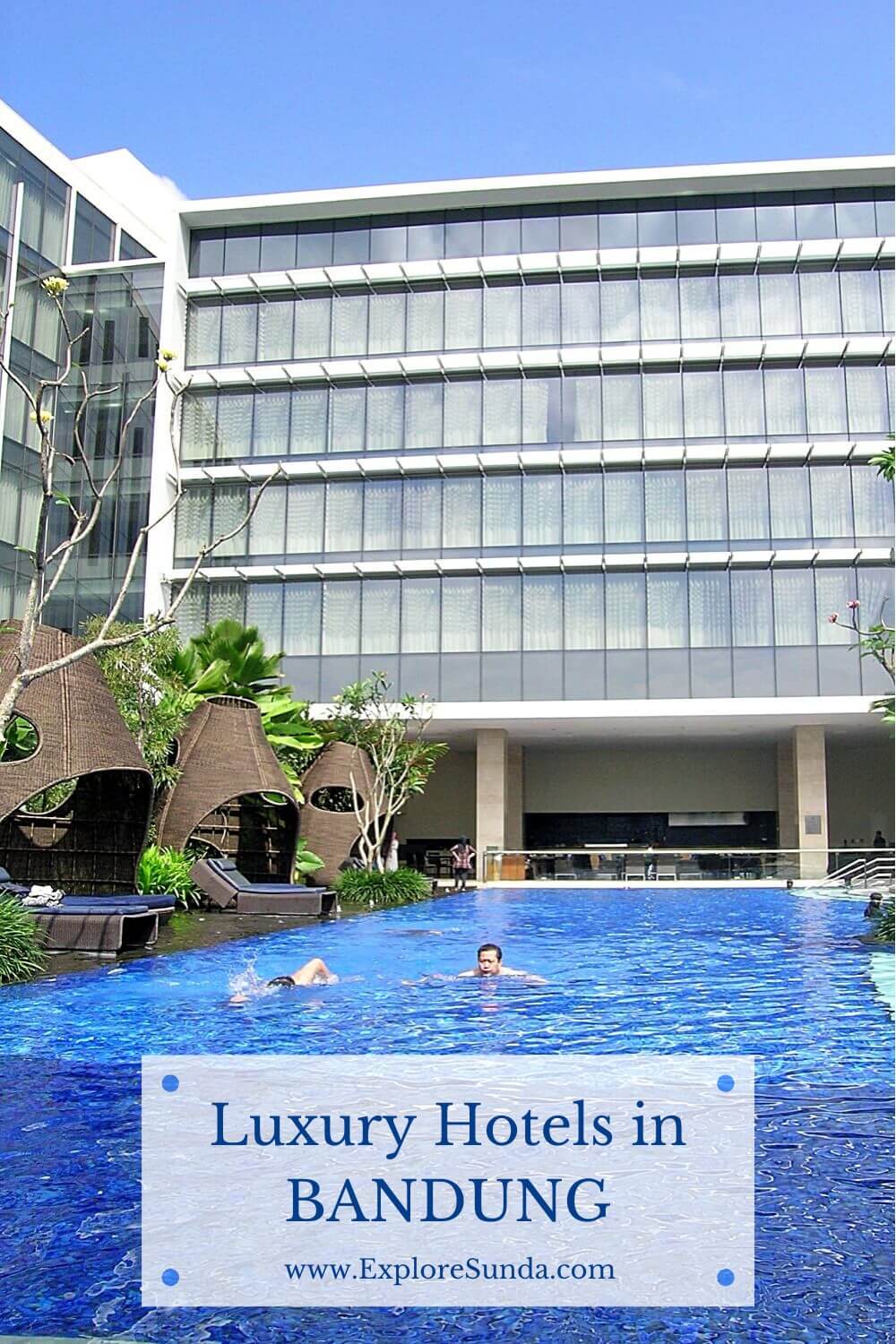 An exceptional hotel with a great location in downtown Bandung. Going to the Husein Sastranegara International Airport only takes a fifteen minutes drive, while Bandung train station is only 650 meters from the hotel. The address is at H.O.S. Cokroaminoto Street, popularly known as Pasirkaliki street, where you will find plenty of restaurants and nightly street food.

Hilton Bandung has three types of guest rooms, with a total of 186 rooms. Highly recommended is to enjoy the view of the famous Mount Tangkuban Perahu while swimming in the rooftop pool :)

Located at Lembong street no. 19, Bandung, Crowne Plaza Hotel is in downtown Bandung and close to Alun-Alun (the city square), the charming old town of Braga Bandung, and the upper area of the city such as Dago, Riau, and Ciumbuleuit. Hence, there are plenty of restaurants and places of interest nearby.

Crowne Plaza Hotel Bandung offers spacious and elegant guest rooms, spa sessions, an infinity swimming pool on the fifth floor, a whirlpool, and a kids club for your children.

At km.0, it is the only luxury hotel in Bandung that nestles in the heart of the city. Many places of interest are nearby, including the historical Braga street, Alun-Alun (Bandung city square), and the Asian African Conference Museum. Asia Afrika street is a popular area to hang out and take pictures. After a long day, you might want to rejuvenate your body by booking a spa session or relaxing at the rooftop swimming pool and garden. 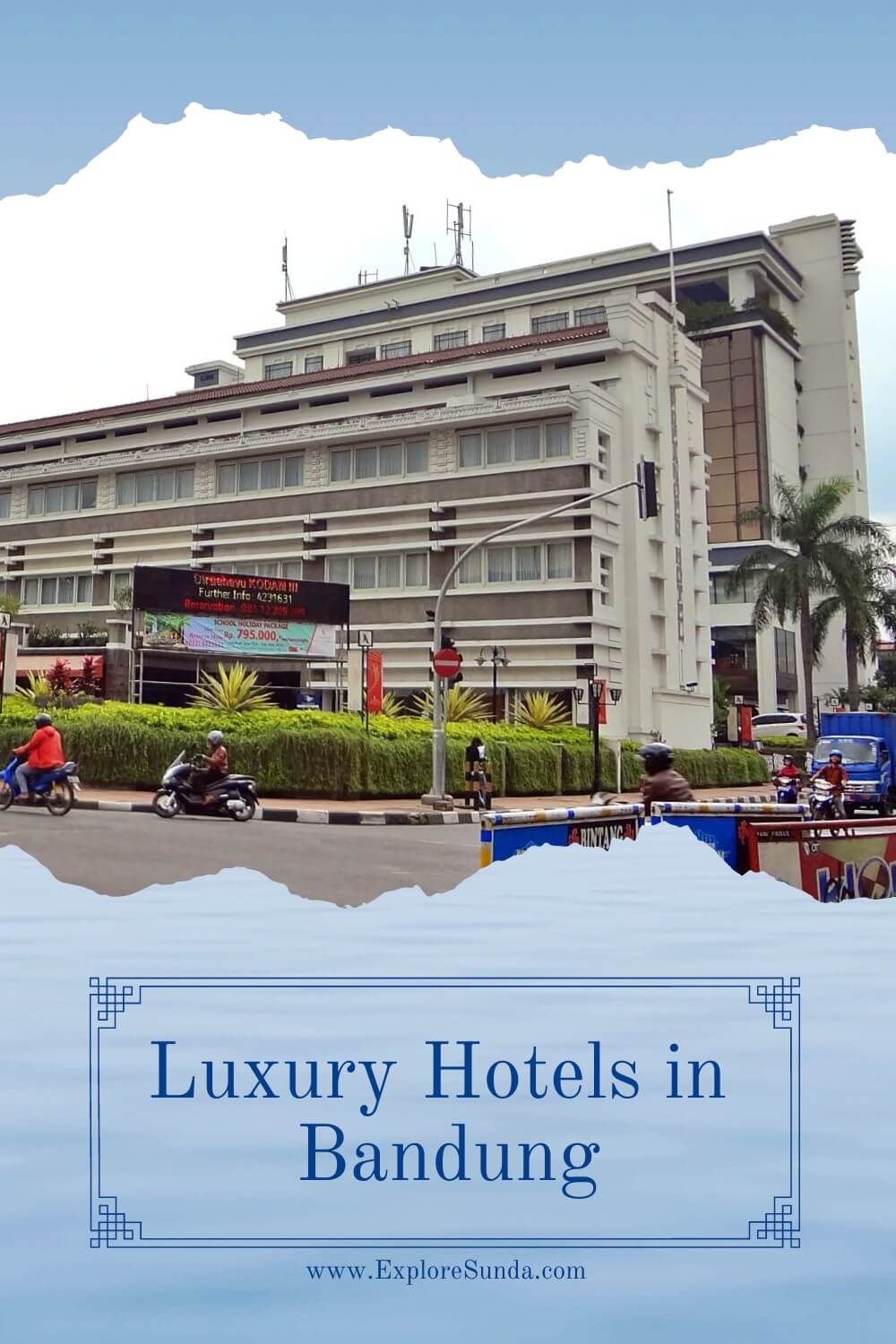 Pullman Bandung Grand Central is a new five-star hotel (opened in November 2020) in a prime location (Diponegoro street no. 27, Bandung). In addition to the opulent guest rooms, you can pamper yourself in the spa and relax in the rooftop bar, which has 360 degrees view of Bandung.

The hotel is facing Gasibu field track, a favorite place for people in Bandung to exercise on weekends and very near to the landmark of Bandung: Gedung Sate. Other nearby places of interest are the Postal Museum at Gedung Sate, Geology Museum, factory outlets in Dago and Riau streets, and Saung Angklung Mang Ujo. Or, go city tour using Bandros bus (the bus station is across from the Geology Museum).

However, the location of Pullman Bandung Grand Central can be a nuisance to the guests when many people gather around Gedung Sate. They come on weekends to do morning exercise. Sometimes people go on a demo at Gedung Sate since it is a provincial government office. Another nuisance is the level of noise from the streets that seeped through the guest rooms.

At Rancabentang street no. 56-58, Bandung, Padma Hotel nestles in the quiet neighborhood of Ciumbuleuit. The hotel rooms are on the slope of a hill, so the guest rooms are facing the scenic view of Ciumbuleuit hill. There are plenty of activities for every member of your family in Padma's adventure park, such as a bird park, high rope, mini-golf, and labyrinth. Make sure you spend some time in the heated infinity swimming pool and jacuzzi or kids pool for younger children. Pamper yourself by booking a spa or reflexology session. Nearby places are fun to explore too. There are several upscale restaurants around here. Plus, the back road through Punclut (Puncak Ciumbuleuit) will lead you to Lembang.

The Intercontinental is one of the luxury hotels in Bandung to relax and unwind. Addressed at Resor Dago Pakar Raya 2B, Bandung, you can see the stunning view of the city, mountains, and golf course. You can enjoy the view while taking a swim in the heated infinity pool or relaxing on its pool bar. You even can enjoy it while dining or take a rest in the room because there are so many floor-to-ceiling windows to ensure you can see the view from every angle possible :) The hotel offers spacious guest rooms, ranging from deluxe to suite rooms. If you choose the villa, you will get a private jacuzzi! You can pamper yourself by booking a spa session or book a golf session at Mountain View Golf Course next door.

The Intercontinental Bandung is pretty close to the Juanda Forest, a.k.a. Dago Pakar, where you will find a Dutch and Japanese bunker from WWII. If you keep hiking, you will reach Maribaya Lembang. Alternatively, there is a back road that will lead you directly from Dago Pakar to Lembang.

Addressed at Ir. H. Juanda street no. 390, Bandung, Sheraton Hotel nestles in the upper Dago area. It is not as crowded and noisy as other hotels in downtown Bandung, but pretty close to the hubbub of the city, especially the factory outlets and restaurants in Dago area. The Juanda Forest and Mountain View Golf Course are close by too. You even can drive through the back road to reach Lembang!

Sheraton Bandung has been around for more than three decades, so it has undergone sizable renovations on the interior designs while maintaining the structure. Hence, it has the charm of the old hotel with its vast garden, lagoon-style swimming pool, and spacious guest rooms, but all are presented in modern style.

The address of Grand Mercure Bandung is at Dr. Setiabudi street No. 269, which is the main road that connects Bandung and Lembang. Hence, it is a bit colder here than downtown Bandung. The hotel is also pretty close to many places of interest surrounding Lembang, such as Farm House, Floating Market, Rainbow Garden, Mount Tangkuban Perahu, Bosscha Observatory, Dusun Bambu, and Cimahi Waterfall. Unfortunately, heavy traffic occurs almost every weekend.

Grand Mercure Bandung has many facilities that will indulge the guests. The highlights are the heated swimming pool, the rooftop bar, and Jing Paradise Chinese Fine Dining.

Another luxury hotel in Dr. Setiabudi street Bandung is the GH Universal Hotel. It is closer to Lembang, but you will easily spot it since the hotel looks like a European palace. The location and the architecture of this hotel lend themselves to the beautiful view and many opportunities for great selfies. It also has a rooftop restaurant with a 360-degree panoramic view, serving European dishes.

GH Universal Hotel is the only hotel in Bandung where you can go on a holiday with your pets. Just bring your cats or dogs (don't forget their vaccination records), then check them in at the Pet Inn :)

Another perk of staying in GH Universal Hotel is the many nearby places of interest. For example, Bosscha Observatory, Farm House, Floating Market, Dusun Bambu, and Mount Tangkuban Perahu.

While you are staying in the luxury hotels in Bandung, you might want to explore: