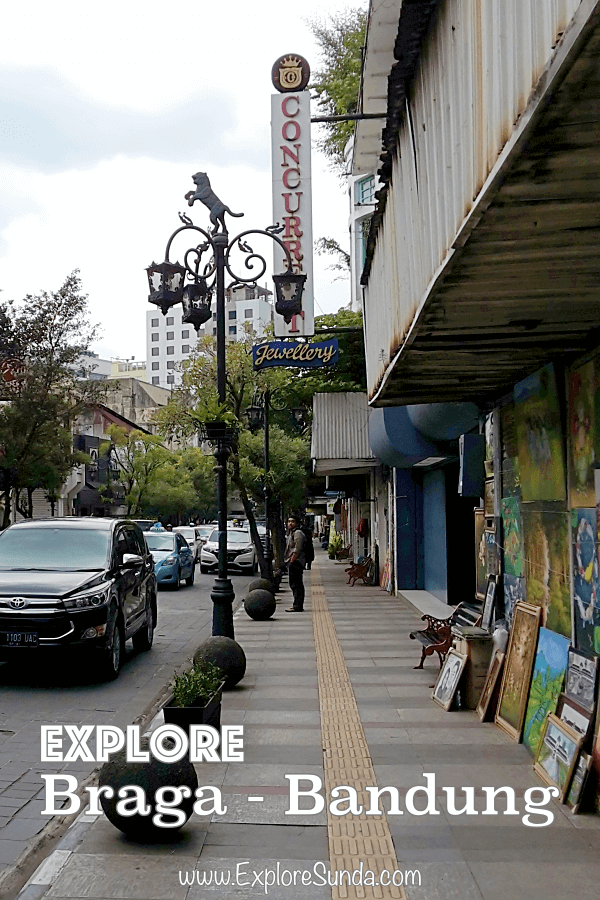 Once upon a time jalan Braga Bandung was the most prestigious street in the city. Bandung got its nickname as the Parijs van Java due to Braga street.

Originally Braga Bandung was called Karrenweg meaning cart trail, since it was used by many two-wheels carts pulled by buffalos to transport coffee to the postal road. When Bandung transformed into a town with many rich Preanger Planters lived nearby, Braga street became the center of the development.

It was the first shopping arcade in Bandung with lots of art deco buildings to admire, plenty of high quality shops and a prestigious cinema.

Everything needed or wanted at that time, most likely could be bought at Braga Bandung. The first shop in the street was a firearm shop belonged to the Hellermann. There were several shops selling beautiful dresses as well as custom-made suits. There was a drama group that performed every weekend. A car showroom, a jewelry shop, a watch and clock shop, a few banks were all took part in Braga street.

People said that the golden days of Bandung as Parijs van Java was between 1920 and few years before World War II. What about Braga Bandung today?

One Day in Jalan Braga Bandung

Strolling around Braga street feels like taking a step back in time: a narrow street with many art deco buildings from the early twentieth century. It is refreshing to see some of these old buildings had been renovated back to their old glory. Hopefully, the remaining buildings will also be renovated before they become ruin beyond repair. 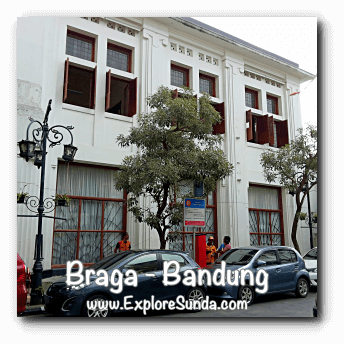 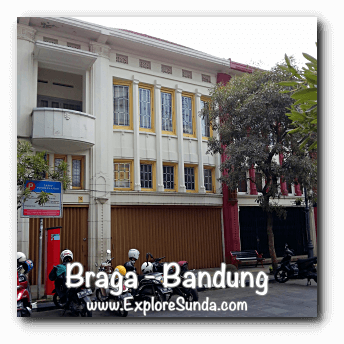 Jalan Braga is the only street in Bandung that uses cobblestones instead of asphalt. Its pedestrian walk has also been renovated with new paving blocks and many park benches. If you look up, you will see the decorated lamp posts with tigers as the mascot.

Since Braga is one of the historical street, city tour buses called Bandros often pass through. Bandros is a shortened name for Bandung Tour on Bus. 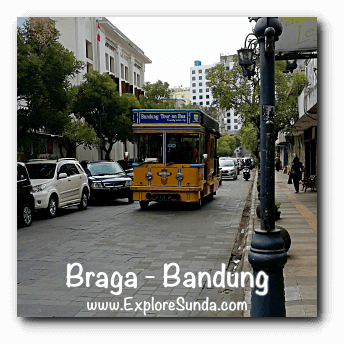 The Bandros passes through Braga Bandung 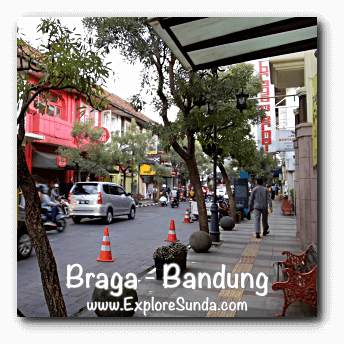 Enjoy a stroll on Braga Bandung.

Years ago prior to the era of shopping malls, shops in Braga street are well known for their high quality merchandises, especially the imported goods. First and foremost: book stores. There were several book stores in this street. A couple of them (Scientific and Intervarsity book stores) carried university text books. I used to buy them here since the university did not have any student bookstore. Next was Indira bookstore, where I bought my first Tintin comic books. The bookstore carried both the English and bahasa Indonesia versions. Djawa bookstore carried many imported catalogues and magazines from Germany and craft books from Japan. Although I couldn't read them, I loved looking at the pictures. Often we could follow the craft instructions without reading any Hiragana character written there. Sadly, all of these bookstores are closed now. Djawa bookstore has been transformed into a coffee shop named Kopi Toko Djawa.

Another store in Braga street Bandung that already closed was Elegance, a clothing store with winter apparels section – rare items in a tropical country! 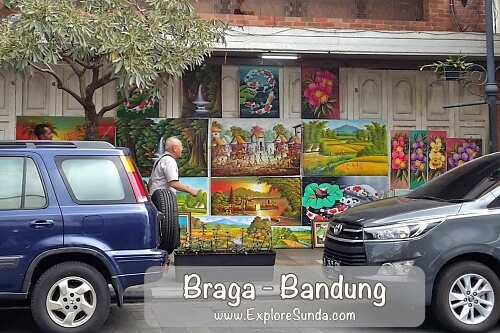 Strolling on the neat sidewalk of Braga Bandung, you will see many paintings hung in front of several closed buildings.  Although selling any merchandise on a pedestrian walk is prohibited in Bandung, the only exception is these painters. They have been in this street for who knows how long. The paintings are large and beautiful, they look like part of the street decorations :)

Besides these painters, there are several shops that survive until now, namely Concurrent Jewelry, Sin Sin Art Shop, and Kamal Photo Supply.

Kamal Photo Supply sells various cameras and their accessories. This shop is quite famous around photographers, both amateurs and professionals.  Sin Sin Art Shop is famous for its high quality souvenirs from all over Indonesia. Find out more about the souvenirs here...

Concurrent Jewelry in Braga Bandung hit the news when ABC Australia published the story of 'The Bravery, Tragedy, and Mystery of Captain Smirnov's Secret Diamond Delivery' in 2021. Before that, Juliet Wills mentioned it in her 2007 book: 'The Diamond Dakota Mystery.'

It was told that David Davidson and his brother-in-law Sloume (Willy) Olberg were forced from their homes when the Nazis invaded Amsterdam. They brought their stocks of diamonds when they moved to Bandung and opened N.V. de Concurrent, the grandest jewelry shop in Braga Bandung. On March 2, 1942, they once again had to move their precious assets from the Javasche Bank in Bandung to Commonwealth Bank in Australia to avoid the Japanese invasion. No one knew for sure the value of the thousands of cut diamonds they put in a cigar box. There were sixty-five small parcels, each containing approximately twenty carats' worth of diamonds. The larger ones (more than seven carats each) had been destined for the Sultan of Deli from Sumatra island. They were worth approximately three hundred thousand pounds then (nearly twenty million dollars in today's money). This box of diamonds was entrusted to Captain Smirnov, the pilot that flew a Dakota plane from Bandung to Australia. Tragically, this flight was attacked by the Japanese Zeros fighters near Broome, Australia. Until today, only a fraction of the diamonds is accounted for; the rest are still a mystery.

Although there are plenty of restaurants and cafes in this street, there are two classic restaurants that were the landmarks of Braga Bandung: Braga Permai and Sumber Hidangan. 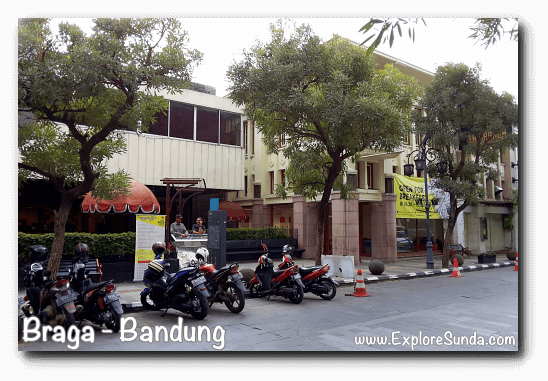 When Braga Permai first opened in 1918, the name was Maison Bogerijen, which was founded by L Van Bogerijen. Although the facade had been changed, the good news is that it still maintains its menu and recipe! It seems over the years more than plenty people like this restaurant, today it has expanded into the adjacent building. The restaurant even starts early, it serves breakfast daily at 6.30am. 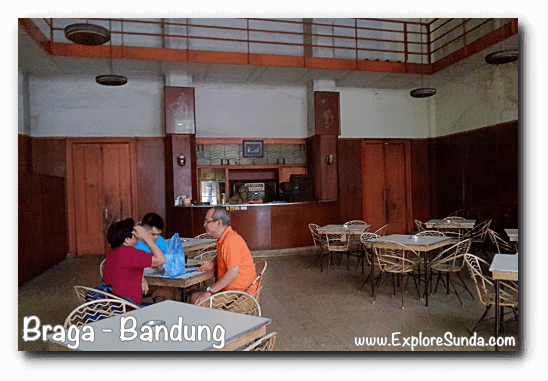 Sumber Hidangan was first opened in 1929 as Het Snoephuis. It was more of a bakery than a restaurant. It offers various kind of old-time breads, cookies, and home made ice cream. The best part is the recipes have never been changed. Unfortunately, the shop has never been renovated, although a little bit of touch up will return it to its former glory, because Braga street will not be the same without Sumber Hidangan!

Besides of these old timers, there are new additions to jalan Braga Bandung. They are Braga City Walk and the hotels. I am not sure what Braga City Walk is, I don't think it is a shopping mall because only few shops here, but it has plenty of restaurants, a cinema, a karaoke, a gym and a hotel. One thing for sure, it easier to find parking space in the basements here than on Braga street.

Due to the historical and relaxed ambience of Braga street, many visitors love to stay in this area. Over the years, there are several hotels opened here, all of them are chained hotels both local and international.

Having completed your day in jalan Braga Bandung, what would be next in your list? Perhaps exploring highlands such as Puncak and Garut, or have fun in the beach?