The Best Restaurants in Bandung

One of the things to do when you travel to Bandung is to eat in the restaurants in Bandung because this city is famous for its delicious food and great restaurants. Plenty of varieties you can choose from: Sundanese food, steak, Chinese food, traditional snacks and desserts, brownies and tarts, are some of them.

Considering there are so many restaurants scattered all over Bandung, here I compile a list of recommended restaurants in Bandung:

Sundanese food and restaurants in Bandung

Traveling to Bandung will not be completed without tasting the authentic Sundanese food in a Sundanese restaurant :)

Braga street Bandung is known as one of the oldest streets in Bandung. Its historical charm attracts many people to hang out here. Hence, you will find several restaurants and hotels in this area. Even two of the oldest restaurants in Bandung — Braga Permai and Sumber Hidangan — still run their businesses here :)

Click here for further information on the restaurants in Braga Street, Bandung.

Punclut has always been a favorite place to view the whole city of Bandung. Hence, one by one small restaurant was established here, they all have a clear view of Bandung.

Find out what Kawasan Wisata Punclut has to offer. 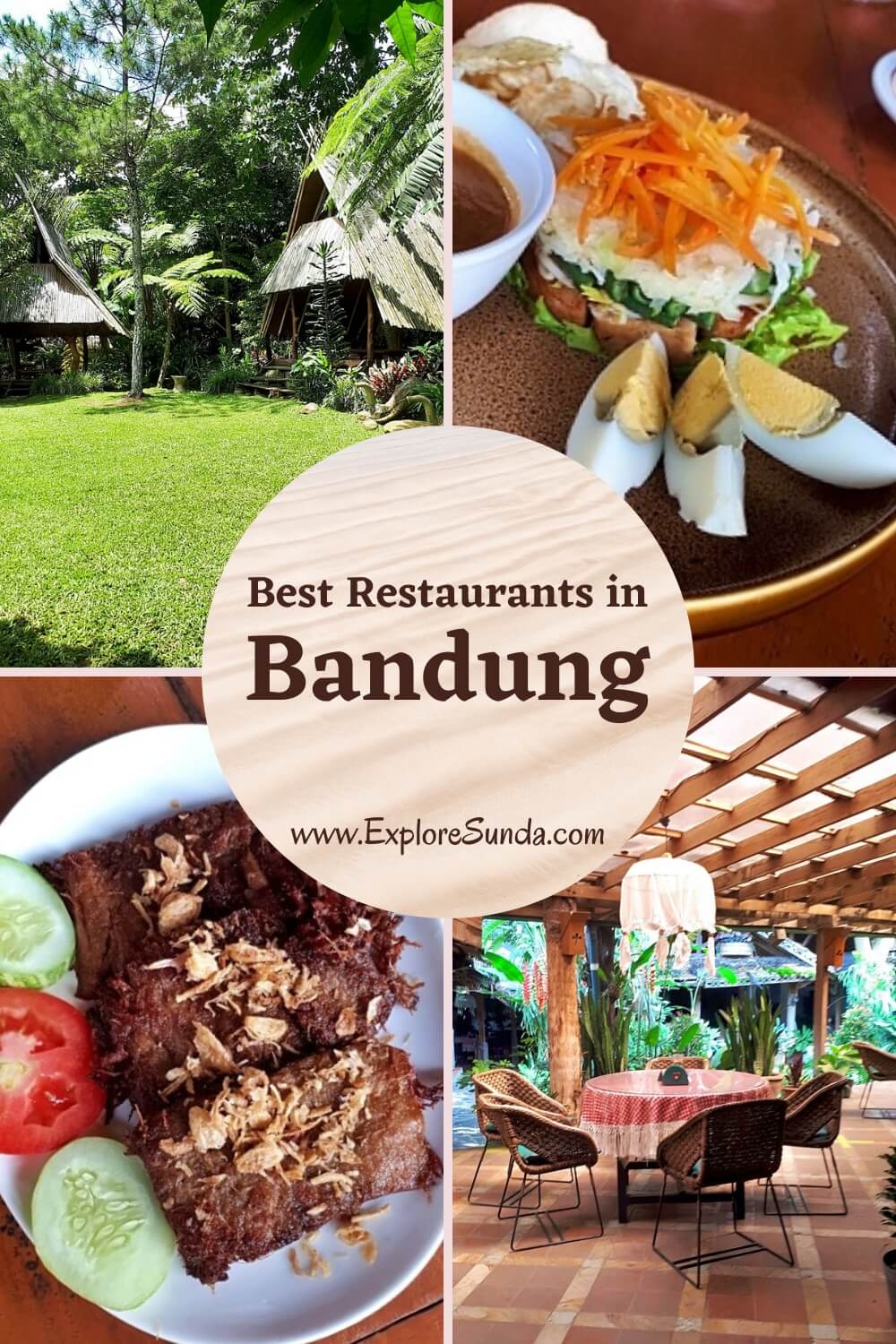 Chinese foods are known for their pork dishes, but many Chinese foods in Indonesia are halal. Most of the Chinese restaurants in the shopping malls put signs of no pork and no lard on their menu. Anyway, as a precaution, if you want halal food, you'd better ask beforehand. Even if the restaurant serves pork, they usually have the beef and chicken version of that particular dish.

For years, Queen International Restaurant Bandung at Dalem Kaum street no. 79 is famous for being the best Chinese food restaurant in Bandung. It specializes in Chinese Canton dishes.

Another well-known Chinese restaurant is Mandarin restaurant. It opens in two locations: at Kebon Kawung street near Bandung train station and in the center of Lembang. Its water spinach hotplate is so tasty! The water spinach is fresh; the beef chunks are tender and served with several boiled quail eggs on a sizzling hotplate.

One particular Chinese food you can easily find at Jalan Kelenteng Bandung is pork Char Siu (chasu, chashao, or char siew). Here in Indonesia, we call it Babi Panggang (pork roast in English). You might also want to try Ambokueh, a Chinese cuisine sold in a food cart at the temple gate.

What if you crave steaks and pasta? Don't worry! Bandung also has several well-known steakhouses: Tizi, Suis Butcher Steak House, Justus, Steak 21, and Glosis. Conveniently, many of them have outlets in malls.

Opening the restaurant in 1974, Tizi is one of the oldest steakhouses in Bandung. It specializes in German food in a homey setting. Get more information about Tizi Restaurant here.

In addition to these restaurants-bakeries, Bandung is also known for its delicious Pisang Bolen (banana puff pastry in English), brownies (both baked and steamed brownies), and Bagelen (warmbollen in the Dutch Languange). Click here to find out where you can find these bread, pastry, and cakes!

Things to do in Bandung: