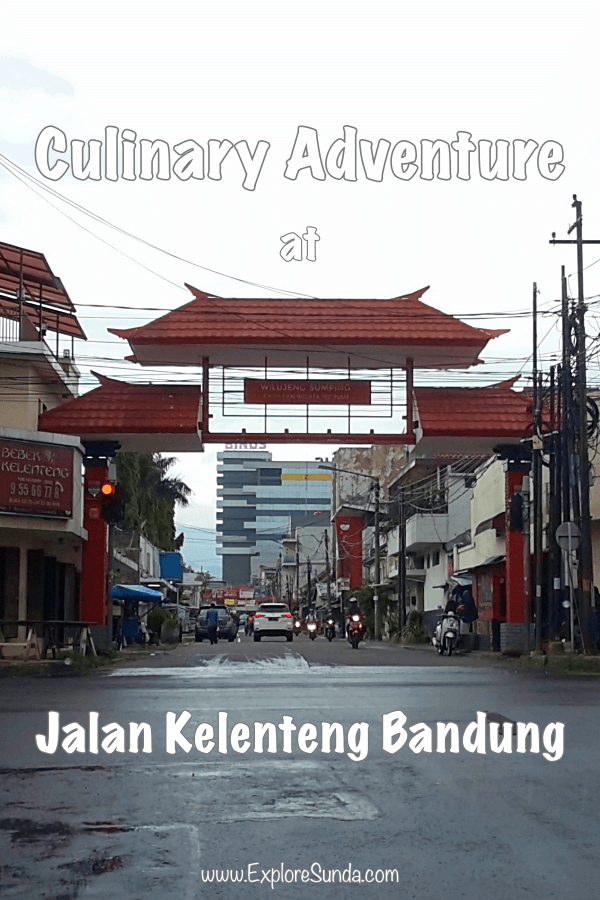 Jalan Kelenteng Bandung is the new Chinatown in the city, where restaurants with tasty food surround the oldest temple in Bandung.

Kelenteng is an Indonesian word for a Confucian temple. This street got its name because there are several temples in this area. The first and the largest one is the Hiap Thian Kong temple (Palace of Gods in English), which opened in 1855. Later on, it changed its name to Vihara Satya Budhi. Presently, people refer to the temple using these two names interchangeably.

The Hiap Thian Kong temple is under Satya Budhi Foundation. Over the years, the foundation built other temples in the same complex: Vihara Samudra Bhakti and Vihara Buddhagaya. Today, these temples form the largest complex of temples in Bandung. 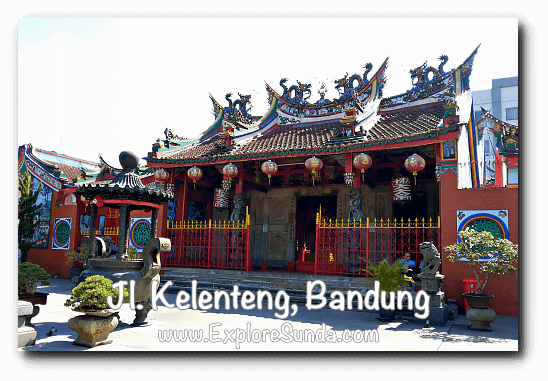 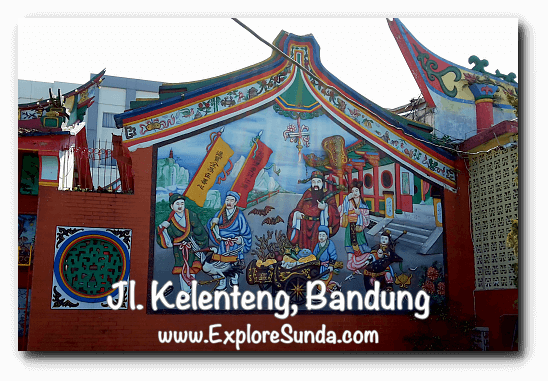 Food vendors at Jalan Kelenteng Bandung are not limited to restaurants. The rest sell food on the pedestrian walk, either on food carts or arrange their food on tables.

Although people dub Jalan Kelenteng Bandung as the new Chinatown in Bandung, not all food vendors sell Chinese food. There are noodle houses, coffee shops, Indonesian food eateries, a fruit kiosk, and snack vendors setting up tables on the pedestrian walk.

However, the most sought-after food in Jalan Kelenteng Bandung is pork Char Siu (alternative names are chasu, chashao, and char siew). We know it as Babi Panggang (red barbecue pork). You will see most Chinese restaurants here sell it, but in my opinion, Hokie, the food cart on the temple gate, sells the tastiest Char Siu.

In the Chinese restaurants at Jalan Kelenteng Bandung, you can order Char Siu in a rice set called Nasi Campur (translated into mixed rice in English). It is a rice set (preferably with Hainanese chicken rice) with slices of pork Char Siu, a pork satay, a fried meatball, boiled egg, and some cucumbers. You also can order a bowl of Bakut Sayur Asin — a clear soup with chunks of pork ribs and Chinese sauerkraut (a.k.a. Suancai or Sayur Asin in Bahasa Indonesia).

While you are at Jalan Kelenteng Bandung, you might want to try Ambokueh, Chinese cuisine sold on a food cart on the temple gate. Ambokueh is another food icon in Jalan Kelenteng Bandung that so far I haven't found outside Bandung. It is a mix of fried rice flour, fried pork sausage, a boiled egg, fried tofu, and cucumber. You can add the cooked pork ear if you like. We eat it with sweet and sour sauce. 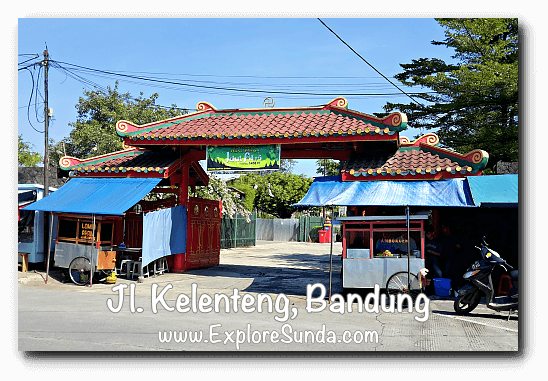 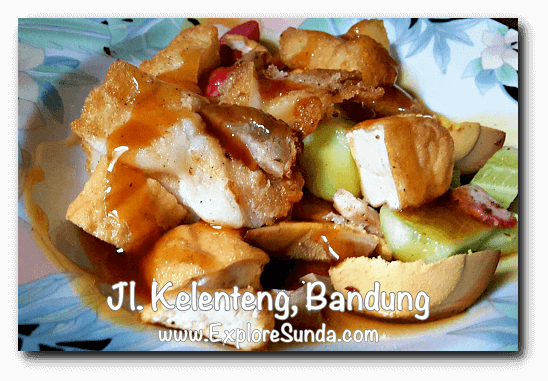 The Chinatown is a food court designed with Chinese architecture and ornaments. To enter the premises, you have to pay Rp. 20,000 on weekends. All the food sold here is halal, without pork and lard.

All transactions inside Chinatown use Flazz cards (the prepaid card from BCA) or BCA debit cards. Don't worry if you don't have any of these cards. The first kiosk is the BCA kiosk, where you can buy and top up the Flazz card. Alternatively, you can pay with any credit card for any transaction more than Rp. 100,000.

This place is fully decorated with the traditional Chinese design, including the small garden. Hence, you will find several good photo spots here. To make it even better, Chinatown has a rental costume kiosk where you can rent a traditional Chinese costume, complete with make-up and a photographer. 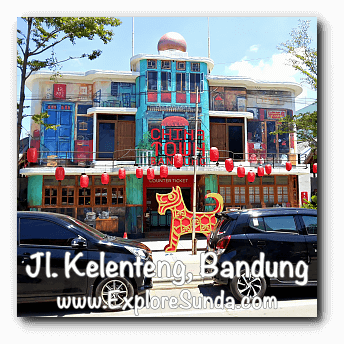 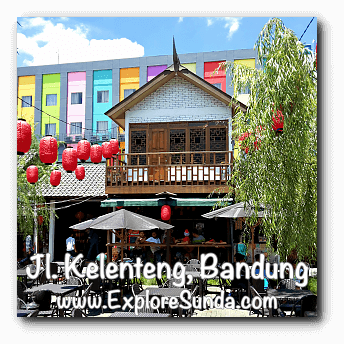 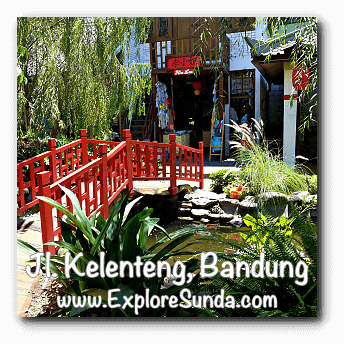 There are two seating options here: outdoor and indoor. Visitors tend to prefer the outdoor seating, although it's a bit too warm during the sunny days. Late afternoon to dinner time is a preferable time for outdoor seatings. The other option is the indoor area. Unfortunately, the seatings here are limited. 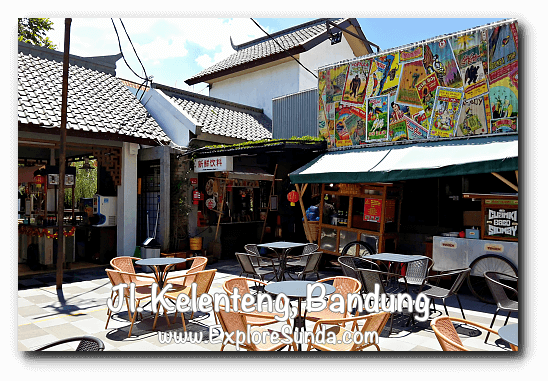 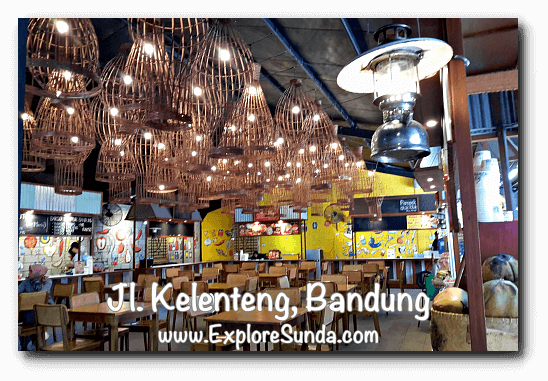 In addition to the food court, there are several souvenir shops too. As you can imagine, most if not all of them are souvenirs made in china :)

When people first enter Chinatown, often they focus on the BCA kiosk, with its bright logo and the salesgirl, who reminds every visitor to top up their Flazz card. Look to the other side, and you will see a green door that leads you to the tiniest museum I have ever visited.

The name of this tiny museum is Bandung Chinatown Museum, which only occupies one small room. One side of the room displays various daily things we used in the past, such as tin cups and plates, an old bicycle, coal iron, and a manual typewriter. The other side displays the history of Indonesian Chinese in Bandung. 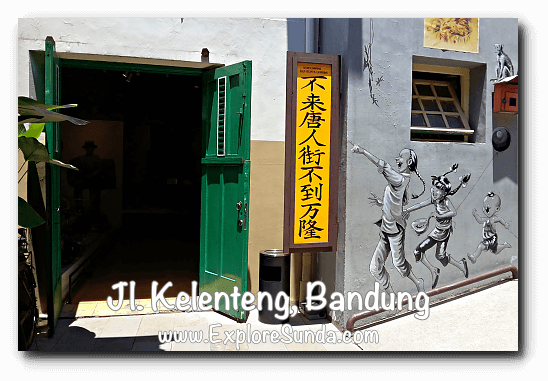 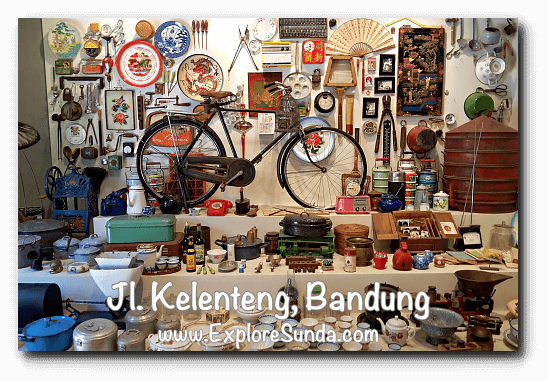 The Chinatown in Jalan Kelenteng Bandung is closed. It started to close its doors when the pandemic COVID-19 reached Indonesia in 2020. As of today, we still don't have any information when it will reopen.

Some things to do after visiting Jalan Kelenteng Bandung :