Beyond Sunda
Places You Must See in Java 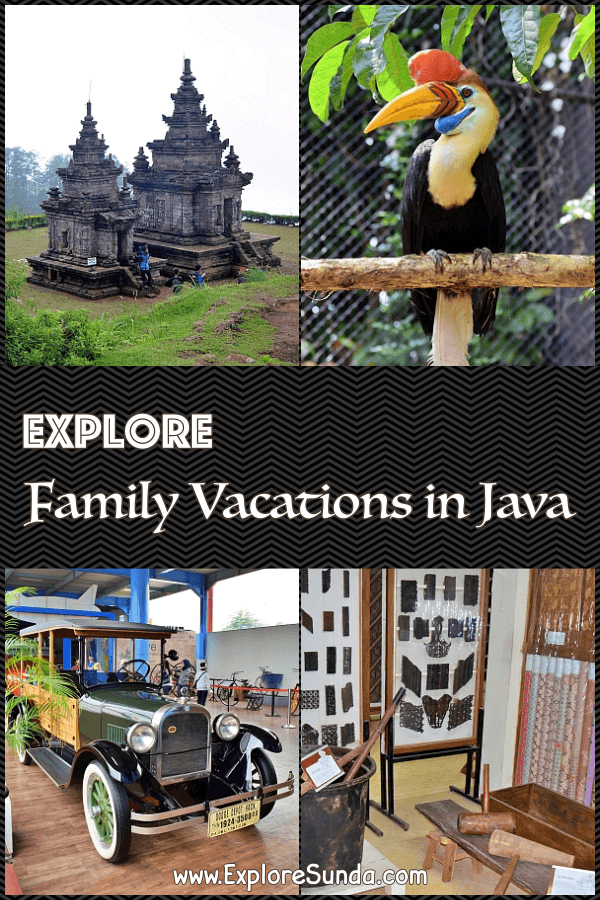 Although the main scope of ExploreSunda.com is within the land of Sunda, over the years we also take vacations to interesting places outside this land. Thus, I will compile them all in this section.

First, let's start with some interesting places in the rest of Java island, i.e. Central Java, Yogyakarta, and East Java. They are rich with cultures and history. Not only that, you also can find more places to have fun for the whole family :)

Java or Jawa in Bahasa Indonesia, is the most populous island in Indonesia. It has always been since centuries ago, when Buddhist, Hindu, and Moslem dynasties ruled Java. Some of the kingdoms were so powerful that their powers spread over the island and had trade treaties with overseas kingdoms, such as China.

Nowadays, you still can see their greatness through the artifacts archeologists found. For one, Java has the most temples in Indonesia. Most of them are made of stones, but some are made of bricks.

Java is more than just the greatness of the past. There are many fun places for family vacations too, such as zoos, parks, and shopping places.

Over the years archaeologists found many temples in the land of Java. These temples are called Candi in Bahasa Indonesia. Most of them are made of stones, but some are made of bricks. The most famous ones are Candi Borobudur and Candi Prambanan, although other temples have their own charms :)

Candi is a term in Bahasa Indonesia that refers to a place of worship for Buddhists and Hindus. Usually, Candi is an ancient structure made of stones. Some are only seen as archaeological sites, but others are still used as places of worship. Thus, Candi is translated as a temple in English.

Candi Borobudur in Central Java is the world’s largest Buddhist archaeological site, as recorded by the Guinness Book of World Records. In 1991, UNESCO put this temple in its list of World Heritage Site. Borobudur temple is also one of the Seven Wonders of The World.

Visiting Candi Prambanan is a must, because it is famous for:

Candi Gedong Songo is a complex of small Hindu temples. It consists of nine temples, scattered in the slope of Ungaran mountain. Thus, it is called Candi Gedong Songo, since in Javanese language Candi means temple, Gedong means building, and Songo means nine.

The trip to Candi Gedong Songo is a memorable family vacation since it is a great combination of historical site, beautiful scenery, cool weather and fun horseback riding.

The precious collection of Museum Batik Yogyakarta is its  hundreds of antique batik.

Here you will learn about the process of producing batik and the different patterns and colors of batik from different regions. You even can try to do batik, guided by their experienced staffs.

Museum Angkut claims to be the Asia's first and biggest museum on transportation, but the real highlight is it uniquely displays various vehicles in several movie sets theme.

Then, you can enjoy dinner and shopping some souvenirs in Pasar Apung (Floating Market) and explore D'Topeng Kingdom Museum, since all of them are located in the same complex.

Go to The Zoo

Eco Green Park is a grand park mostly covered with big trees and greenery, where you can have a fun family vacation while observe varieties of birds, learning about ecology and green living :)

Jawa Timur Park 2 uniquely combines children rides with a zoo, a safari farm to feed several species of herbivores and a natural wildlife museum. Thus, with 1 ticket you will be able to explore Batu Secret Zoo and Museum Satwa, as well as take rides and have fun in the waterpark.

Batang Dolphin Centre is a dolphin conservatory where you can watch the dolphins swim and perform. It also has a Mini Safari for some other animals.

Gembira Loka is a great zoo located in the heart of Jogjakarta.

It has a good collection of wild animals. You can feed the birds, see performances of some of the trained animals and watch the zoo keeper feed penguins, tigers, chimpanzee, arapaima, snake, and little black cormorant seabird.

You also can have fun in the lake or get lost in Gua Sarpa Garden.

Are you ready for a fun day in Gembira Loka Zoo? First, read the full article here..

Top things to do in Yogyakarta

Yogyakarta is one of the top tourist destinations in Indonesia. Having so many interesting places you should explore, here's a list of top things to do in Jogja.

Return to The Land of Sunda

Sunda has many unique and interesting places too. For example, the two famous botanical gardens in Bogor and Cibodas, turtle conservatory in Pangumbahan beach, Ujung Genteng and the city forest park in Bandung: Tahura Juanda.