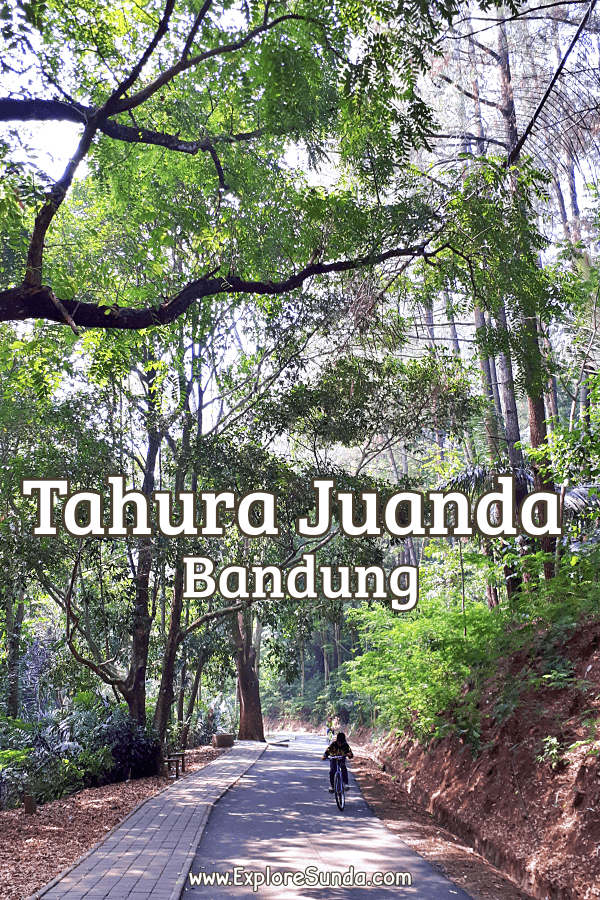 Dago Bandung is an area at the north of the city. It is considered as the uptown, where you can see many huge houses along the street. Driving further up and you will reach Taman Hutan Raya Ir. H. Djuanda (Tahura Juanda). If you love outdoor and walk under the canopy of a pine forest, you should visit this forest.

Since it is located on mount Pulosari, Tahura Juanda was initially declared as Pulosari Protected Forest during Dutch colonization in 1912. In the beginning, the area of this forest was 590 hectares, but according to the measurement in 2003, presently its size shrinks to 526 hectares. This area stretches from Curug Dago (curug is a Sundanese word for waterfall) in Dago Bandung to Maribaya in Lembang.

Over the years, its name and status have been changed. Its status has been changed into a forest park, with lots of activities to offer. It was named after the Indonesian hero from West Java: Ir. H. Rd. Djoeanda Kartawidjaja. So, the official name of this park is Taman Hutan Raya Ir. H. Djuanda (shortened as Tahura Juanda). But, the locals are still more familiar with Dago Pakar (the name of this area), instead of its official name. 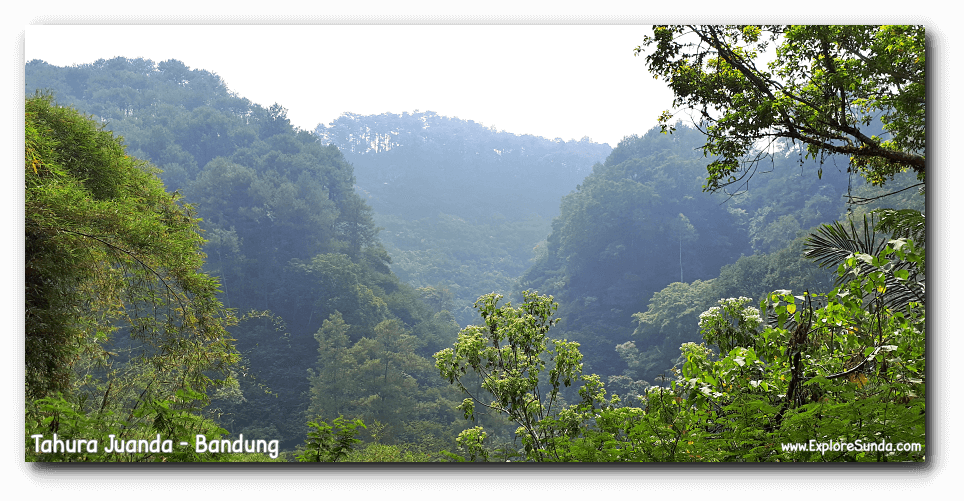 Due to its size, there are four gates to enter Tahura Juanda: the first and second gates are accessed through Ir. H. Juanda street (it used to be called Dago street), the third gate is further up near Tebing Keraton and the fourth gate is in Maribaya, Lembang. Which gate you should go to really depends on what do you want to do in Tahura Juanda. 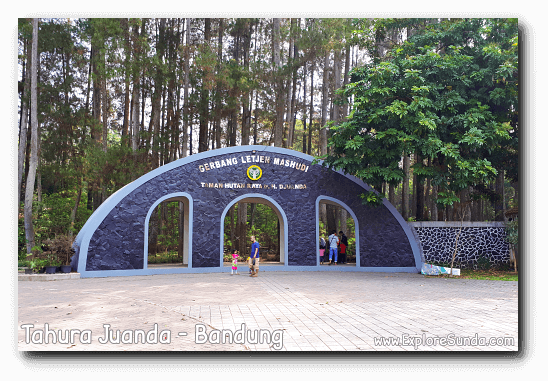 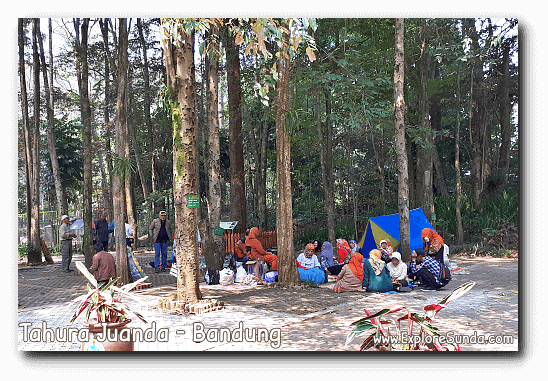 Today, there are many activities we can do in Tahura Juanda. If you enter Tahura Juanda through gate one or two (these two gates are close to each other), you will immediately reach Tahura Plaza, Ir. H. Juanda museum, playground and outbound areas.

The plaza is an open space where we could find the head bust of Mr. Juanda with the famous Juanda Declaration below it. Visitors use the surrounding area for picnics. Next to the plaza is the museum, which has information about the park and the great things Mr. Djoeanda did for Indonesia.

Further down, there is a playground to entertain children. It is a very basic one though. The more challenging is the outbound course. There are several courses of outbound there, but of course anybody who use them must be supervised at all time. 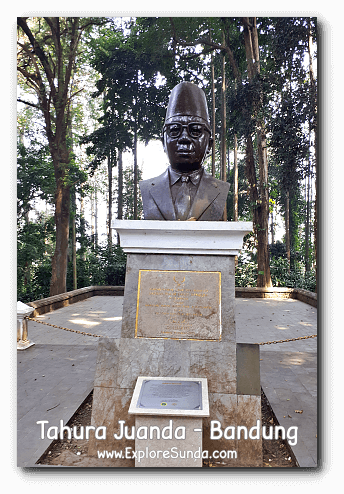 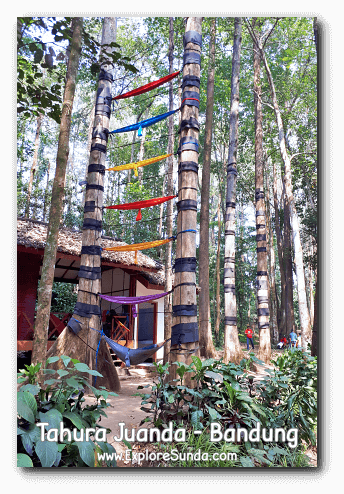 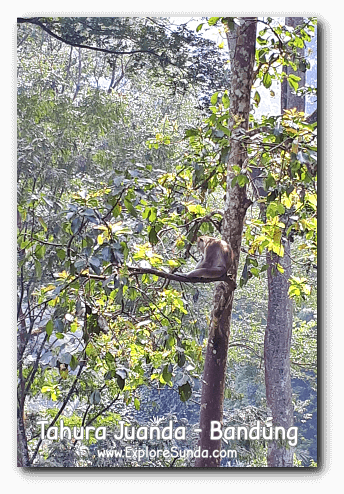 Now, if you come from gate three, first you will reach Tebing Keraton (Keraton means palace and Tebing is Bahasa Indonesia for cliff). The road leading to gate three is smaller than gate one and two, but it is very close to Tebing Keraton, where we can see the pine forest of Tahura Juanda as well as the Lembang fault.

Gate four is located in Maribaya, Lembang. If you come from gate four, the nearest place you can visit is Curug Omas (Curug is a Sundanese word for waterfall), which is approximately one km away. Then, you can continue walking to gate three, two and one.

If you intend to do the long walk, I recommend you to walk from gate one or two to gate four, or vice versa. This walk would be fun and entertaining for the whole family since it is only a light hiking, as long as you are prepared to walk for approximately 7 km. Along the way you will walk under the canopy of pine forest, passing through the famous Japanese and Dutch caves and walk over the hanging bridge near Curug (waterfall) Koleang. You only need to bring one small bottle of water, since there are several kiosks scattered in the park, they sell mineral waters, soda and snacks such as instant noodle. 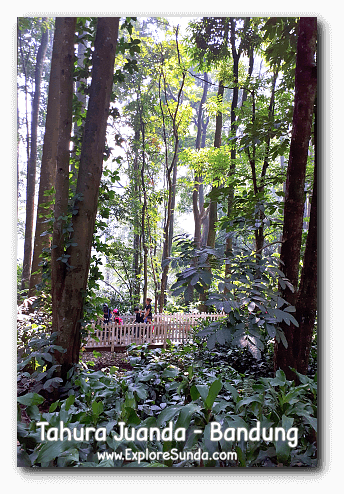 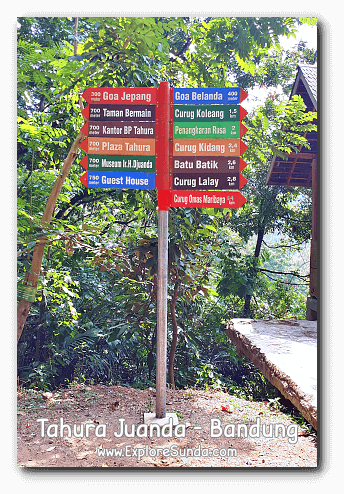 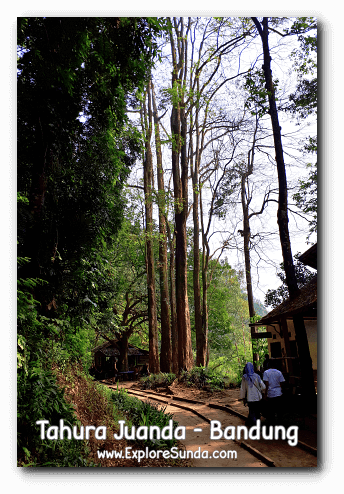 Since Cikapundung river passes through Tahura Juanda, there are several waterfalls in this park. Besides Curug Omas in Maribaya and Curug Koleang, there are Curug Kidang and Curug Lalay as well as Curug Dago (the Dago waterfall is still part of Tahura Juanda but the location is further south, separated by streets and residences). 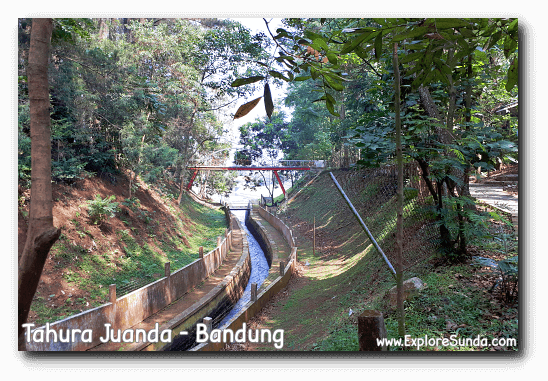 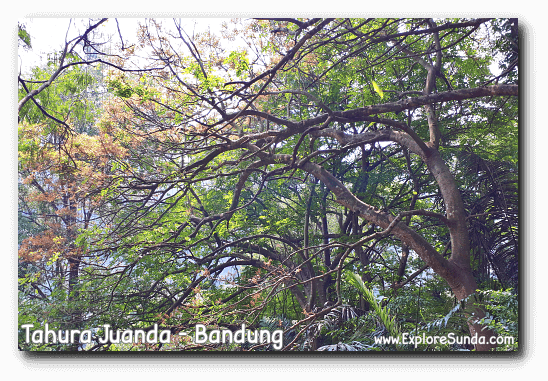 Tahura Juanda is also a home for monkeys, various birds, and deer. The deer breeding is approximately four kilometers from gate one. You can buy some carrots and feed these deer. On the other hand, although the monkeys look cute and all, you should not feed them, because when they are used to human feeding them, they will snatch whatever you hold whenever they are hungry.

If you are lucky, i.e. when the water level of Cikapundung river is low, you will be able to see Batu Batik. It was made of thousand years old lava from the eruption of mount Tangkuban Perahu that was frozen and become a stone. The frozen lava created a pattern on this stone, some people say it looks like batik, some call it Dayang Sumbi shawl (Dayang Sumbi is the fallen goddess from the legend of Tangkuban Perahu).

Since there are so many interesting places in Tahura Juanda Bandung, they can’t be well describe in one article. Thus, they will be in a series of articles, starting with the famous Dutch and Japanese cave.

Let's continue our exploration with the most sought after activities: explore the Dutch and Japanese caves!

These caves used to be bunkers during the World War II, they are securely hidden inside this forest park.

Continue reading the Dutch and Japanese caves in Tahura Juanda ...

Being in the forest and all, bugs are inevitable. So, don't forget to wear mosquito repellent, especially if your skin is sensitive to any bug invasion!

If you are interested in following the trail from Dago Bandung to Maribaya, you'd better come early so it won't be too hot and use public transportation. Personally, I would suggest a taxi or online taxi to reach gate one or two at Dago Bandung, so you don't have to walk back (another seven kilometers) to retrieve your car. Then, you can immediately continue your adventures in Maribaya and Lembang :)