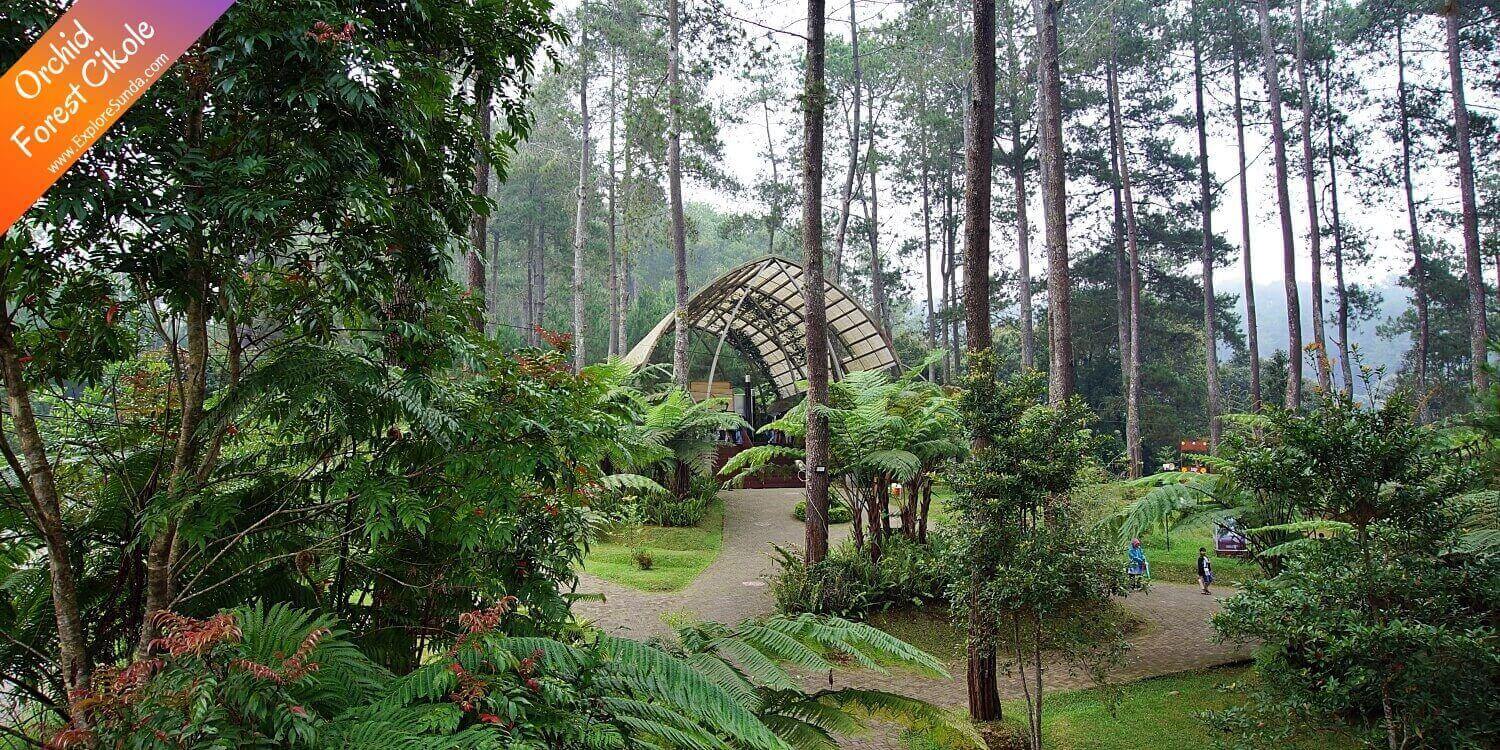 Orchid Forest Cikole is a park inside a pine forest. The air is so fresh, and you can leisurely walk on the paved paths under the canopy of pine trees. The location is on the slope of Mount Tangkuban Parahu, which means cool weather all day long, often accompanied by a cold sprinkle of rain.

The entrance to Orchid Forest Cikole looks like a petal of an orchid. There are many beautiful potted orchids adorn it. The orchids used to be planted on the tree trunks too, but now all the remaining orchids are inside the Orchid House.

Things to do in Orchid Forest Cikole

As soon as you pass the ticket booth, your eyes will be spoiled with the serenity of a pine forest. There are plenty of activities here. One is to climb a platform near the entrance and enjoy the panoramic view of Orchid Forest Cikole from higher ground. The view from this angle is beautifully different because you will be in the middle, between seeing people mulling below and looking up at the tree tops that are still far above you. 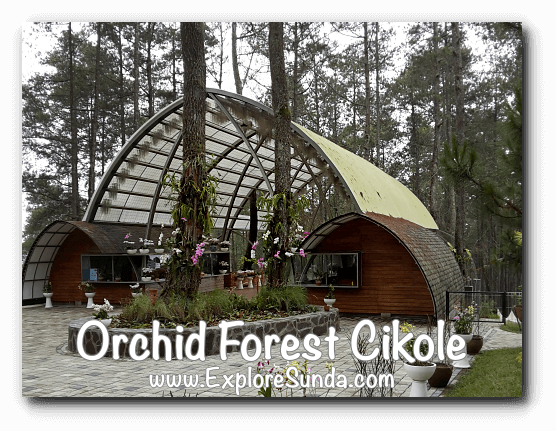 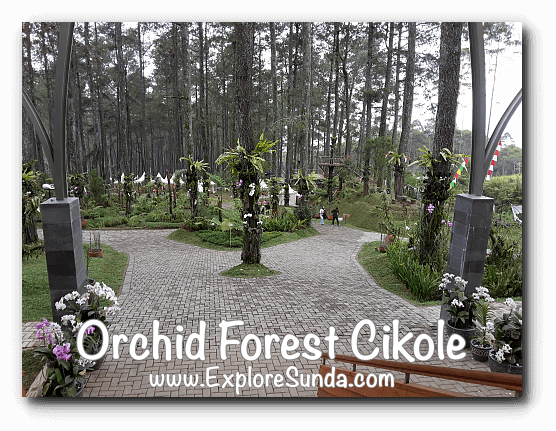 From the beginning, the highlight of Orchid Forest Cikole is the Wood Bridge at the back of the park. It is a long bridge connecting many pine trees. The bridge is approximately three meters above the ground. It uses wooden planks as its base and knotted ropes as its railings. You have to pay for additional tickets to enter it. For security reasons, only five people at any time are allowed to walk there, and it will be closed when it's raining. It is a one-way bridge, so when you have reached the end of the bridge, you can choose to return to the main path with a flying fox or walk on the track under the bridge. It used to be a dirt path with several hammocks hanging on the tree trunks, but now it becomes the Garden of Light with lots of fairy lights strung around.

There are many fun activities you can do while you stroll from the entrance to the Wood Bridge:

The one place you must see in the Orchid Forest Cikole is the Orchid House. It is a greenhouse that has a vast collection of ingenious orchids. Unfortunately, these types of orchids rarely bloom. On the other hand, the colorful phalaenopsis and dendrobium blossom all year round. 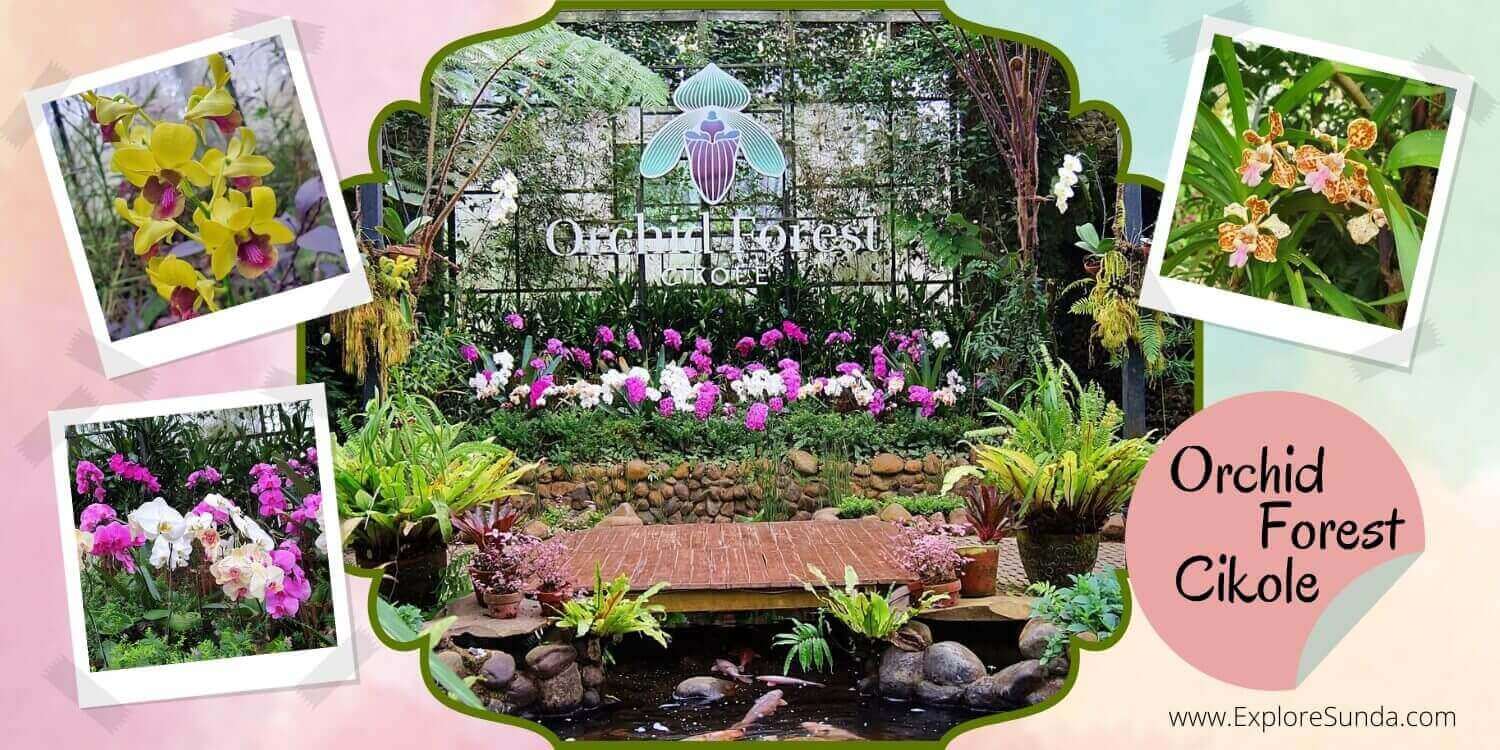 The next spot to see is a triangle structure in front of the Orchid House exit. Although it is called the Green House, it only has two slanted sides without any door. The plants in this structure add to the loveliness of this place for taking beautiful pictures and selfies. It is gorgeous and well decorated :)

If you like the orchids and want some for your home or friends, the path will directly lead you to the Bazaar Anggrek (Orchid Bazaar in English). It is a shop selling many commercial orchids such as phalaenopsis and dendrobium. It also sells small and colorful cacti. Even if you are not interested in buying them, they are so lovely to look at :)

Rabbits are not the only animals in this park. For an additional ticket, you can ride a horse in the Horse Ranch near the exit of the Orchid Forest Cikole. Not a fan of the fluffy rabbits and horses? How about a dog? Do you know you can bring your dog to Orchid Forest Cikole? Unleash your dogs in the Pet Playground and let them play around :)

Tired of having so much fun? You might want to replenish your energy by going to the many eateries scattered around the Orchid Forest Cikole. To the left path of the entrance, you will find Aspasia Coffee which serves pizza, coffee, and some snacks. But if you are following the right one, you will reach Pine Kitchen. You can dine or order a picnic basket. Enjoy the picnic and endless photo opportunities :) If you want more varieties on the menu, you should go to the food court near the Orchid Castle. Last but not least, there is a food stall in front of the Giant Chess serving comfort food, such as instant noodles, hot dogs, and coffee.

The main path of Orchid Forest Cikole is a long paved path that descends from the entrance all the way to the exit gate near the Horse Ranch. You may opt to go out here and take the free shuttle cars to the parking lot. Or, if you still want to prolong your stay in Orchid Forest Cikole, you just walk back up to the entrance. There is an exit gate beside the big entrance lobby. Presently, there are many souvenir kiosks in this upper parking lot. Plus, some operators on mountain biking and paintball. 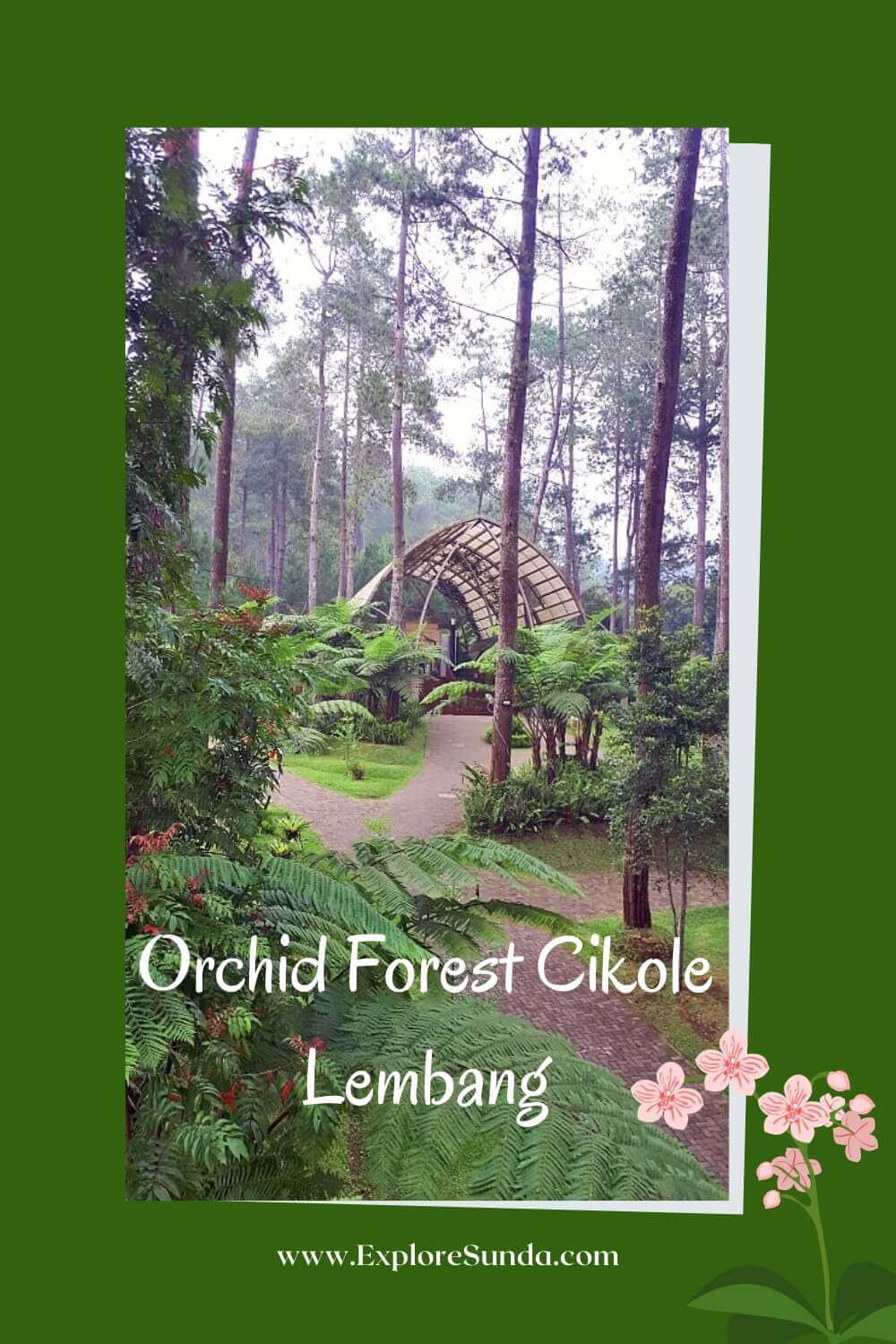 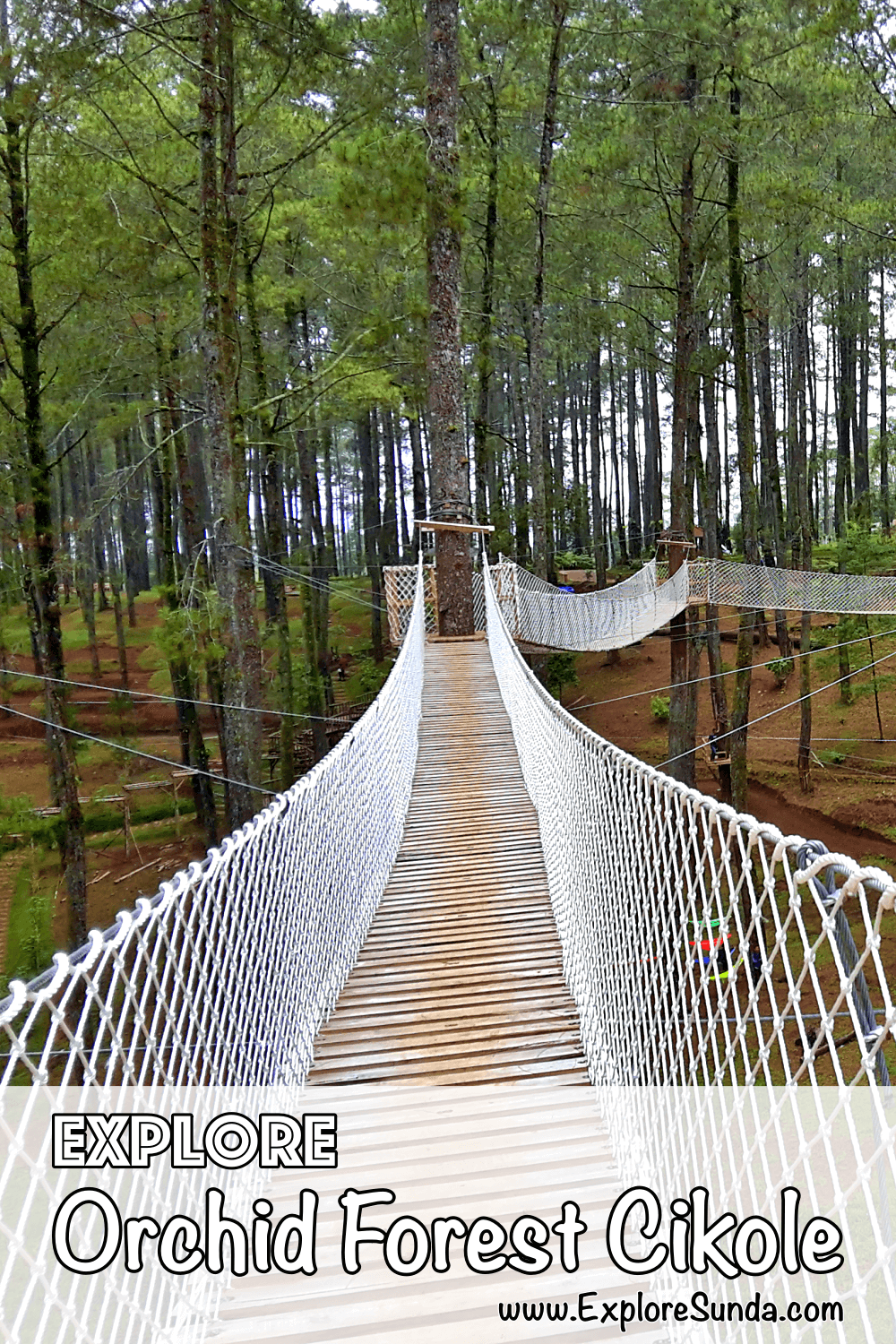 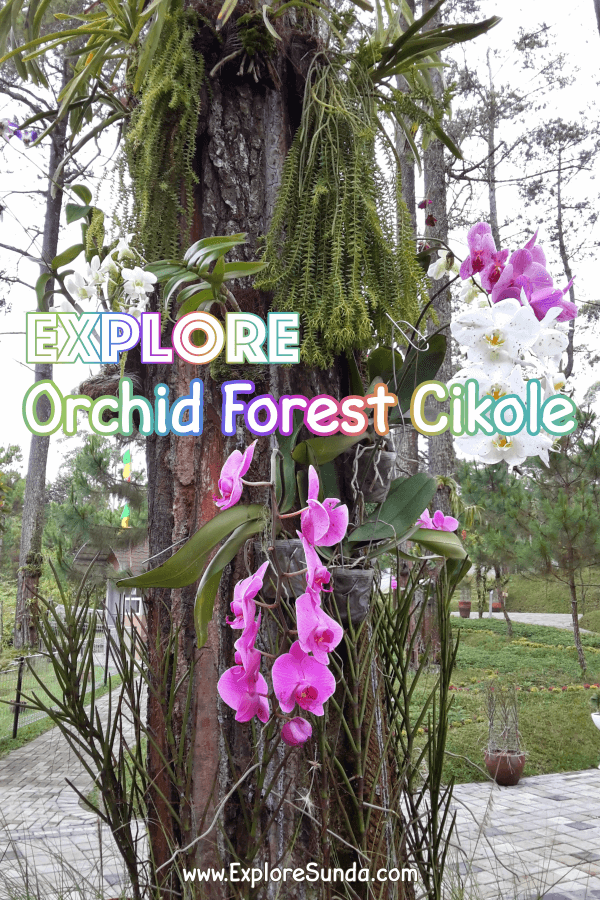 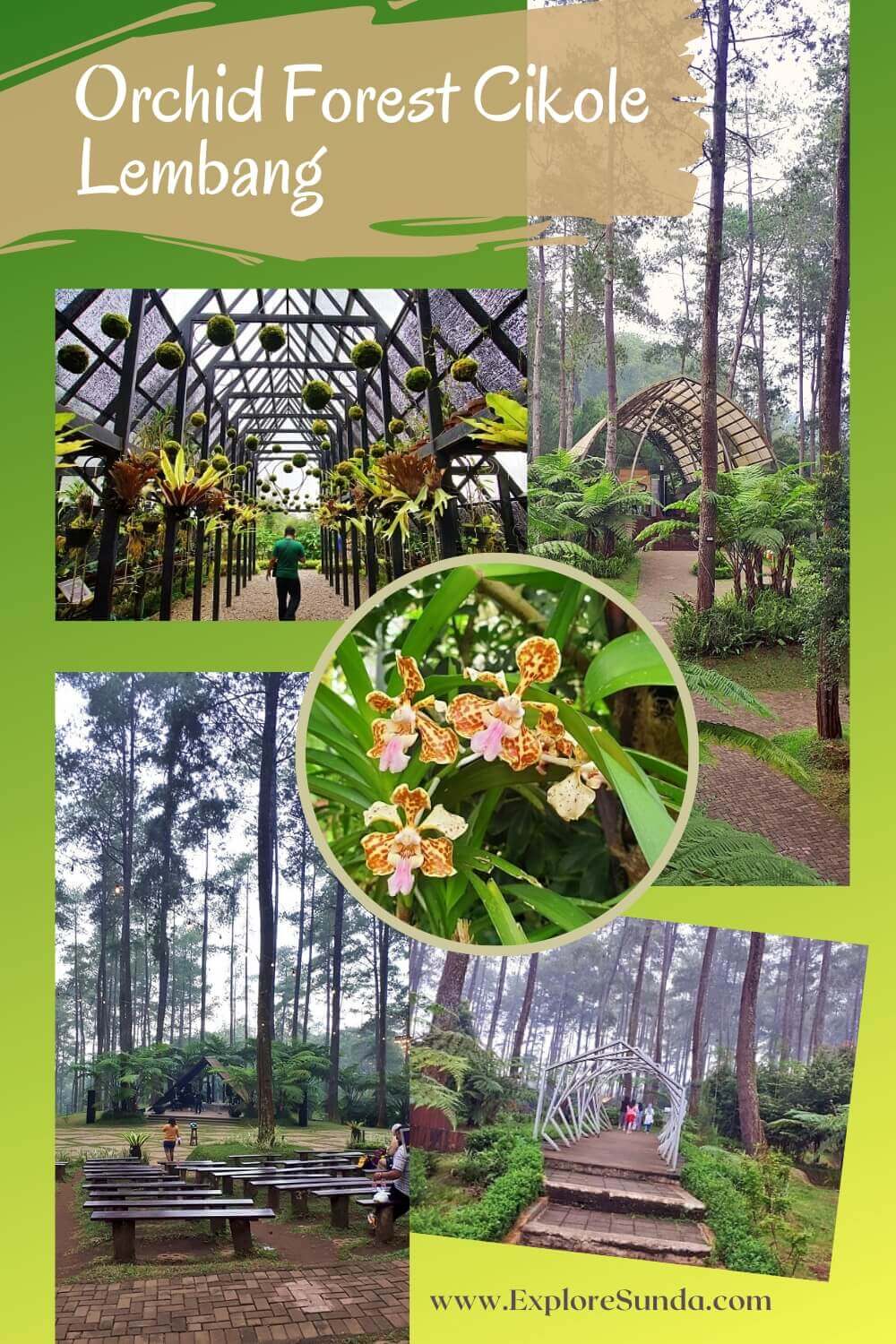 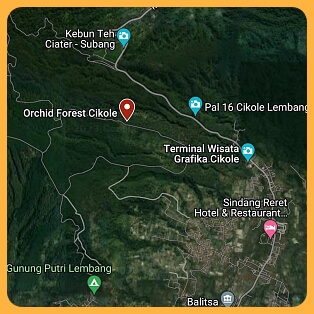 Click/tap the map to go to Google Map and find your directions to Orchid Forest Cikole.

Orchid Forest Cikole is located on the slope of Mount Tangkuban Perahu, the most famous mountain in the greater Bandung area. It is approximately 7 kilometers north of Lembang, across the Jayagiri camping site. The coordinates are -6.7802777,107.6361084.

The road to Orchid Forest Cikole is the main road connecting Bandung, Lembang, and Subang. Hence, it is easy to catch public transportation. However, they are minibusses without air conditioning, which aren't comfy. 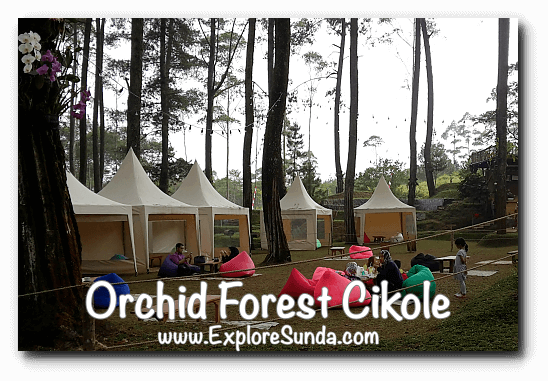 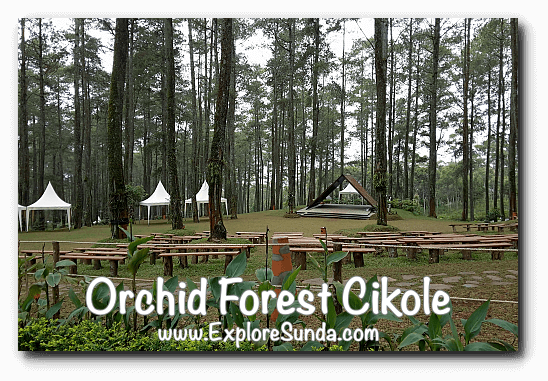 Orchid Forest Cikole Lembang is not the only place you can see and enjoy the orchids. Bogor Botanical Garden has two orchid green houses. Taman Bunga Nusantara in Cipanas Puncak is the largest flower garden in Indonesia. If you want to buy orchids, there are many nurseries selling orchids in Cihideung Bandung as well as in TAIP (Taman Anggrek Indonesia Permai) Jakarta.