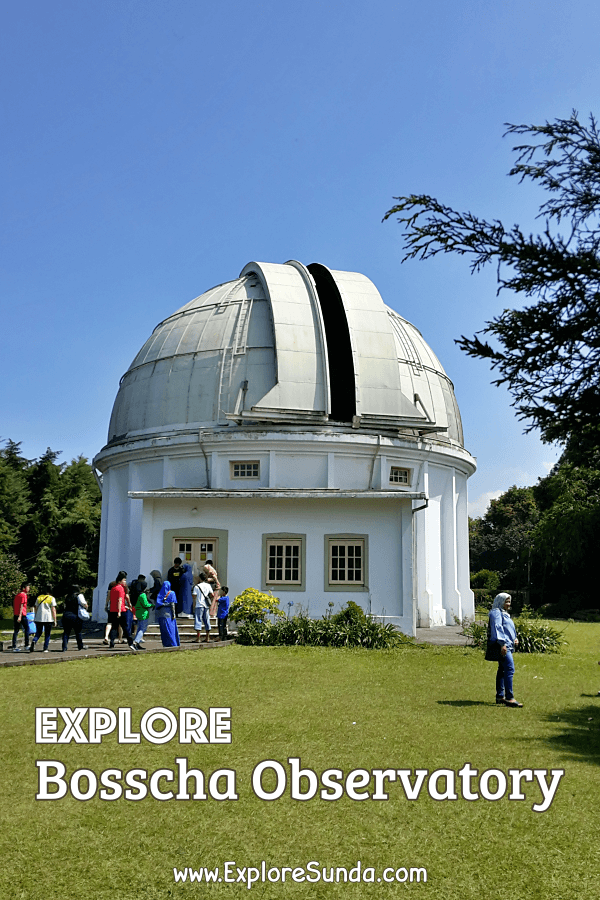 Bosscha is an astronomical observatory complex in Lembang. It is the one and only in Indonesia, until the new one is completed in Kupang, East Nusa Tenggara. Although the main objective of this observatory is scientific researches, once a week it opens its door for public. So, don't miss an opportunity to explore this great observatory!

Bosscha is opened for public every Saturdays, but it is closed during the fasting month of Ramadan. There are four guided tour offered on Saturday morning, each lasts about an hour.

From April to October, they also offer several night tours to observe the night sky. However, it really depends on the weather, since it can only be done when the sky is clear.

The capacity of each tour is 90 people. But they will be divided into two groups: each group takes turn in watching video in the multimedia room and observing inside the observatory.

The multimedia room is okay for the introduction of Bosscha complex, what the astronomers research here, as well as the comparison how small earth is compared with other planets and stars in the galaxy. Since they play a video, this room is turned into some kind of cinema. Hence, the dimmed light and closed door. Unfortunately, this old room does not have enough ventilation, thus, the musty odor is strong. 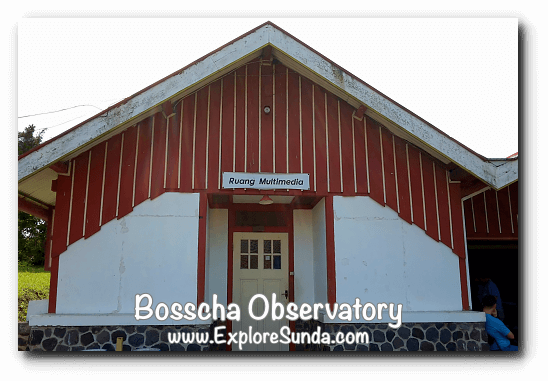 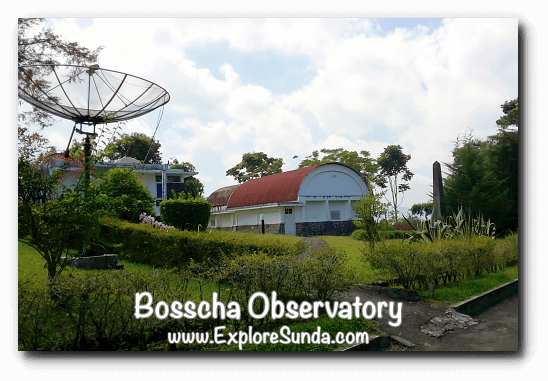 On the other hand, entering the observatory is one of a kind experience. Bosscha complex is stated as Heritage Object since 2004. Thus, each building must be preserved as is. It is also stated as National Vital Object since 2008, so don't be surprised when you meet air force personnels here. 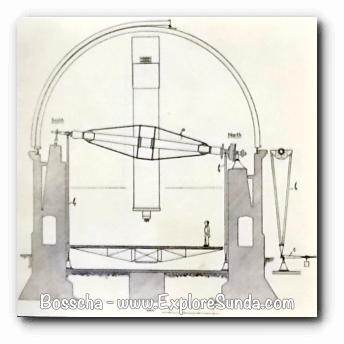 The observatory is called Kupel, from a Dutch word 'koepel' since the shape of its roof is a dome and the wall looks like a cylinder. The construction was started in 1923 and finally completed in 1928. It was built with Lembang fault in mind, thus until now it can survive any earthquake with magnitude up to 7SR. The roof was made of steel and it could rotate 360 degrees. Although the roof must be opened manually, the rotation of the roof is handled by a motor made by Siemens, a prominent German manufacturer. Surprisingly, they can control the rotation through a remote control, although this antique remote control is attached to a long and thick cable.

There are five large telescopes in Bosscha, but the most popular is the Zeiss double refractor made by Carl Zeiss, another prominent German manufacturer. It has two objective lenses with a diameter of 60 centimeters each and a focal length of 1080 centimeters, weighed approximately 17 tons. It was installed in 1928 and it is still working smoothly. As you can imagine, this telescope occupies most of the space in the observatory. Since it is an old telescope, the scientist must manually push or pull it to adjust its angle. 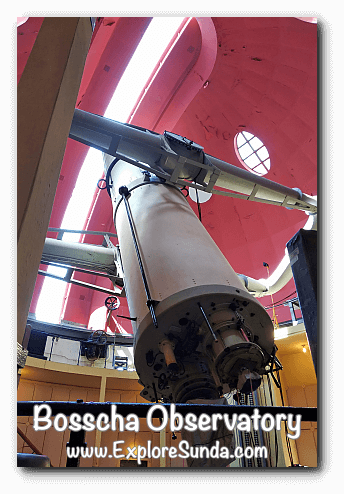 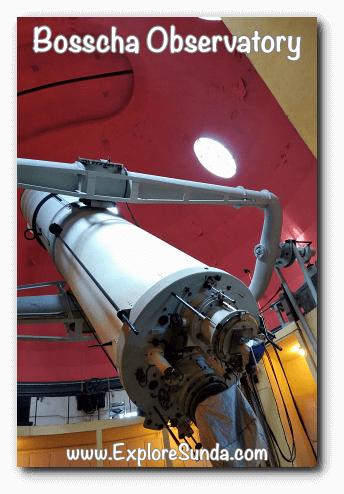 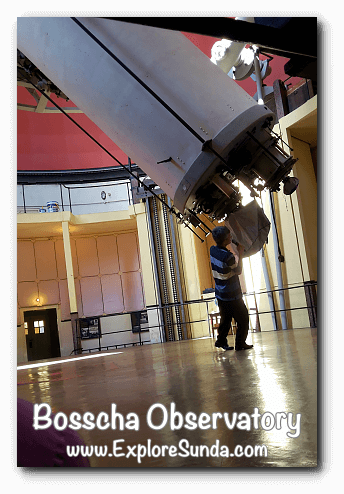 Another amazing thing in this observatory is the platform where the scientist work. The platform works like a giant elevator that can be raised up to the height of the wall, i.e just right below the dome. Hence, the scientist can choose on how to observe the space, whether to stand or lay back on the reclining seat.

Unfortunately, due to the limited space and time, the pictures here do not do justice to the greatness of this observatory.

One important precaution: everybody must be cautious while observing Bosscha. It is not a playground. For example, the platform can be raised up and leave a dark room underneath it, which is called a basement and children can easily fall down. Another example is the old electricity panel attached to the wall with a power of thirty thousand volt. So, please keep your hands to yourselves and watch over your children. 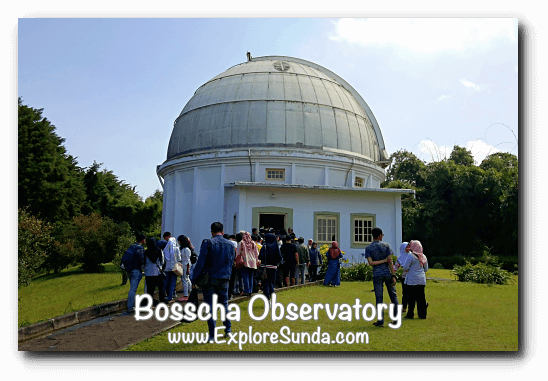 It is ashamed that this magical experience is tainted by the visitors. Every time the door is opened, visitors crowded the door, each wants to be the first to enter and get the best spot. I hope the visitors are more disciplined or perhaps the organizer can instilled some kind of queueing system.

The Bosscha complex occupies almost eight hectares of land. Over the years, more buildings are added and the surrounding villages are getting crowded. It resulted in light pollution, which is not a suitable environment for any observatory. That's why the new observatory is built in East Nusa Tenggara, where the sky is much less polluted. Nevertheless, the view is gorgeous here.

Finally, don't forget to check out the souvenir shop. There are several miniatures of the observatory, keychains and various t-shirts sold there. They are all uniquely Bosscha :) 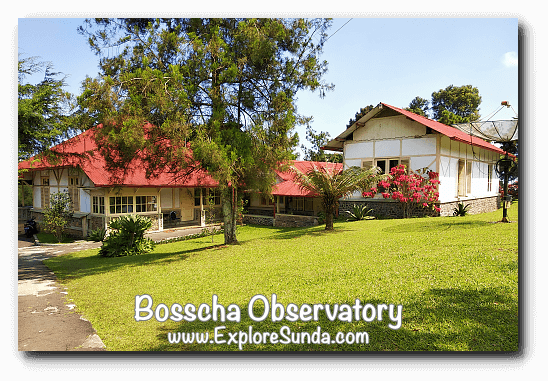 Bosscha is located between Bandung and Lembang. If you go from Bandung, it is a bit further up from Farm House, the gate is at the right side of the road. The address is Jalan Peneropongan Bintang no. 45, Lembang. Once you pass the gate, you still need to walk or drive for a couple kilometers. The GPS coordinates are  6°48'56.0"S 107°36'45.0"E.