The story of Sangkuriang and mount Tangkuban Perahu is like a two side of a coin. They will always be told as one.

This story had been told verbally from generation to generation for a very long time. It was mentioned in the script written by Bujangga Manik, the prince from Sunda Kingdom, who did extensive travel throughout Java and Bali in the 15th century. 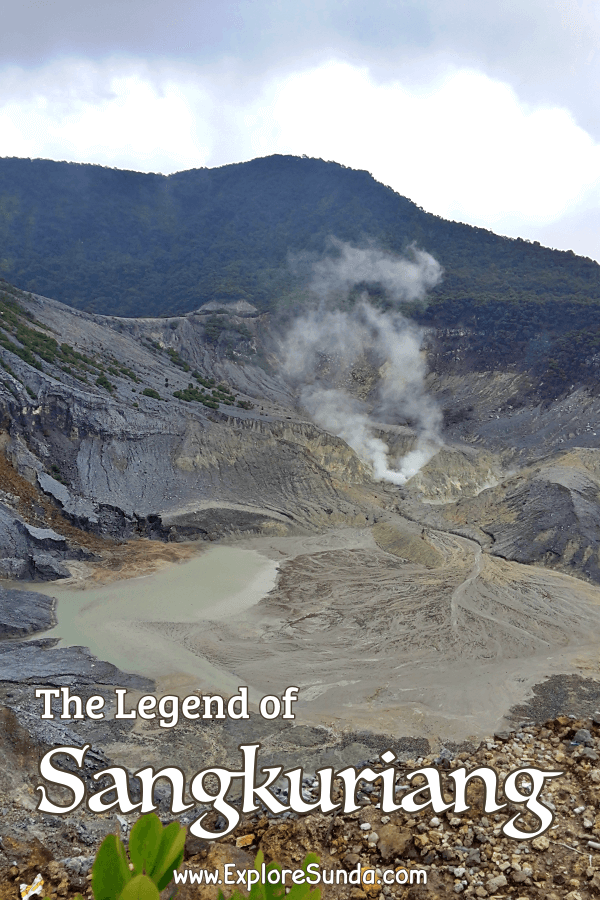 The free translation is:

I walked to the west, arrived at Patenggeng hill, the legend of Sang Kuriang,
how he failed to dam Citarum river in one night (when the new day came) …

This story happened in the time when people still believed in gods and goddesses who resided in svargaloka (heaven). When they did wrongdoing, they were punished to become animals on earth. Please remembered that as far as the legend goes, anything could happen, especially magical things.

The story of Sangkuriang begins with …

One day a god was punished to become a dog named Tumang and a goddess to become a boar named Celeng Waluyang (Celeng is a Sundanese word for a boar). Both were sent to live in the forest.

When the king hunted in the forest, he found a baby, the daughter of the boar. He named her Dayang Sumbi and raised her up to become a beautiful maiden.

Dayang Sumbi’s pastime was to weave many beautiful fabrics. One day one of her weaving tools fell down. Since nobody was around, nobody helped her. Being desperate, she announced whoever gave her weaving tool back she would consider her a sister if she's a girl or marry him if he's a man.

Unexpectedly, Tumang, the god who was punished to be a dog, returned her weaving tool. Hence, Dayang Sumbi married him. Soon, their son, Sangkuriang, was born.

One day she asked her son to hunt, so he went to the forest with Tumang. Sadly, Sangkuriang couldn't find any prey that day. Hence, he killed Tumang, cooked it and served it to his mother.  When Dayang Sumbi found out about it, she was furious, so she hit his son’s head with a rice spoon and banished her son.

Many years later, Sangkuriang returned to his village and met a beautiful lady. He didn't know that the lady was his mother, since the legend said the god granted Dayang Sumbi an eternal youth. In no time he fell in love with her and proposed to marry her.

Accidentally, she found his scar on the head where she hit him, hence, she knew he was her long lost son. In order to prevent the marriage, she asked Sangkuriang to dam Citarum river and built a boat in one night. He summoned spirits to help him. When he almost finished it, Dayang Sumbi was so afraid, hence, she ran to the horizon and waved her red shawl, so it looked like the sun had risen. Thus, the roosters crowed and farmers started their day.

Sangkuriang, who thought he failed, got angry so he kicked the boat. It became mount Tangkuban Parahu. The  lake was Bandung basin.

The dam Sangkuriang built on Citarum river creating an enormous lake, where Bandung is located presently. Hence, many people relate the legend of Sangkuriang with the origin of Bandung.

When Sangkuriang knew he was tricked by Dayang Sumbi, he chased her while ransacking the wedding preparation. He kicked everything in front of him. According to the legend, they all became Citatah karst on the western Bandung. For example:

He relentlessly chased her until they crossed a river called Ci Luncat (ci means river, luncat means jump), where they were jumping on stepping stones to cross the river. Exhausted, finally he took a break and sunbathing at Rancamoyan (ranca means swamp, moyan means sunbathing).

The beauty of this story is that it is connected to the topography of the surrounding area, from mount Tangkuban Perahu in north of Bandung, through the valley of Bandung where it used to be an ancient lake, to Citatah karst in western Bandung. Unfortunately, the karst has been mined for years, there isn’t much left of the whole landscape.

Geologically, the flat peak of mount Tangkuban Perahu is due to the many eruptions resulted in twelve craters on the top of the volcano. Besides the Queen crater at the top of the mountain, try to visit Domas crater, where you can boil eggs. Another nearby tourist attraction is Orchid Forest Cikole and many more beautiful places in Lembang. Explore them all!