So, you are planning a trip to Bandung Indonesia and wondering which hotels in Bandung you should book? Do you know that H.O.S. Cokroaminoto (a.k.a. Pasir Kaliki or Paskal) street is one of the favorite areas for hotels in Bandung? In short, it's because of its strategic location in downtown Bandung. Plus, it is easy to find something tasty to eat with so many eateries in Paskal.

First, let's take a look at the many underlying reasons why so many tourists choose Paskal when they book hotels in Bandung and see whether it suits your style and need. And then, we continue with the short reviews of each hotel in Paskal. You'll be surprised with the range of the hotels here: from a five-star hotel to a capsule hotel!

Why Hotels in Bandung at Pasirkaliki?

Several years ago, the city officials changed some street names to the name of Indonesian heroes/heroines. Thus, Pasirkaliki street transformed into H. O. S. Cokroaminoto street. However, many people in Bandung are more familiar with Pasir Kaliki (shortened as Paskal) than its new name. That's why we will use these two names interchangeably.

The only five-star hotel in PasKal, it is the best choice if you long for comfort and style when you stay in Bandung. The service is exceptional. On a clear day, you might be able to see the view of Mount Tangkuban Perahu while relaxing and swimming in the rooftop pool.

Check out other five-star hotels in Bandung here ...

If you are a budget traveler or want to try something different, you might want to spend a night at Bobobox Pods Paskal. It is a three-star capsule hotel, meaning your room has enough space for a bed, a mirror, and a small table only. Bathrooms are communal on each floor. It feels futuristic because the hotel app in your smartphone handles everything, from check-in, a key to unlock your capsule door, control lighting of your pod, and check-out. One drawback of the pods is it is not soundproof. Although Bobobox doesn't serve breakfast, there are plenty of food vendors in Paskal, including a convenience store across the hotel.

Opened in 2019, Tokyo Cubo is a two-star hostel with a Japanese style, including its parqueted flooring. The location is on the side street of Paskal.

Here you will get a bunk bed with a black-out curtain and a spacious locker. You can hang out in the game room watching tv or playing some board games. Bathrooms and a dining room are communal. There is a laundry service adjacent to the lobby, and convenience stores are nearby.

If you are a budget traveler, VK Pods might be your choice of hotel. It is one of the capsule hotels in Bandung. Every room has several pods stacked in two rows. Privacy wise, it is less private when instead of a door, you only get a curtain to close your pod's entry.

Located in one of the shophouses of Paskal Hypersquare, you will find plenty of eating places, karaoke, cinemas, and shops, lots and lots of them :) 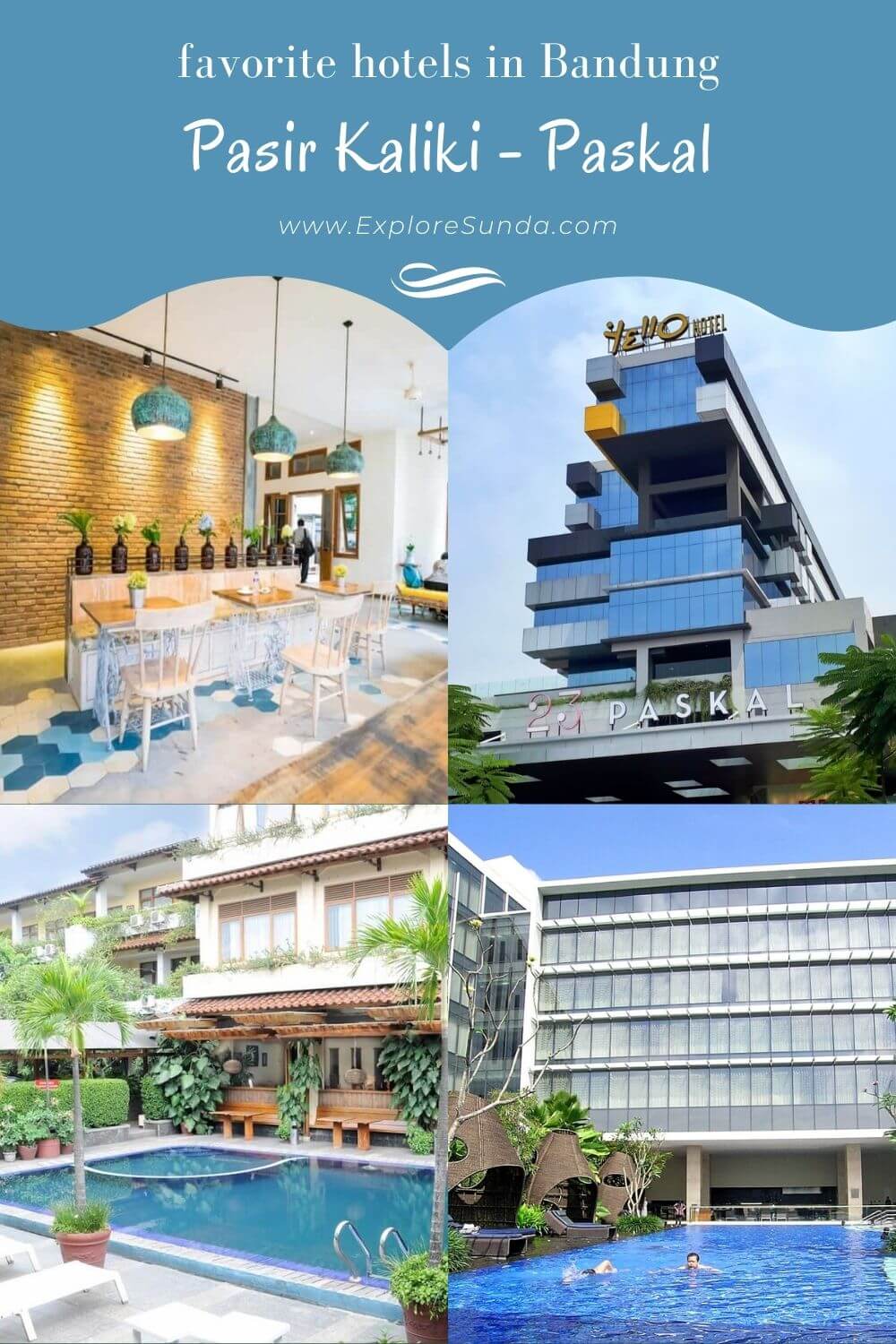 Launched in 2017 as a three-star hotel, YELLO hotel is on top of the 23 Paskal Mal, in the center of the Paskal Hyper Square complex. The hotel has a modern and minimalist look. Its rooftop pool and the game corner are favorites among guests.

Eating places in Paskal Hyper Square is plenty. Shopping in the 23 Paskal Mal is fun too. However, if you drive a car to Bandung, you have to pay an additional charge for a parking space.

Opened in 2014, Fave is another three-star hotel inside the Paskal Hyper Square complex. Since it is a budget hotel, the guest rooms are relatively small. But the highlight of this hotel is its location. It is across the 23 Paskal Mal with many restaurants, food courts, shops, and cinemas. You can find more eating places at Kelenteng street, which is behind this hotel.

Opened in 2012, El Cavana is a three-star hotel situated across the rail tracks. Hence, the train station is only 470 meters to the east. Paskal Hypersquare, where you can go shopping, dine-in, and watch cinemas, is only 200 meters to the west.

The hotel has a rooftop swimming pool, while the restaurant is on the 8th floor with a city view.

Renovated in 2018, Cemerlang is a three-star hotel that offers several thematic guest rooms. Each theme resulted in entirely different designs and vibes. It has karaoke rooms, a coffee shop, and a Chinese restaurant called the Golden Dragon.

The hotel is in front of Kebon Kawung street, approximately 500 meters from Bandung train station.

Grand Pacific is another three-star hotel in Paskal Bandung. It has a rooftop swimming pool, but the hotel is rather old (launched in 2010). The best part of this hotel is its location. It is within walking distance (approximately 200 meters) to two favorite malls in Bandung: Istana Plaza and Living Plaza, and a short taxi ride to Paris van Java (PVJ) mal. Plenty of food vendors on Pasir Kaliki street.

Atlantic City is a three-star hotel that launched in 2015. It has a nice rooftop restaurant with a city view. However, it could use some cleaning. The parking lot is limited. The best part of this hotel is its location. It is adjacent to KFC; and near Istana Plaza and Living Plaza Mal. It only takes a 10 to 15 minutes drive to Husein Sastranegara airport or Bandung train station. Lembang is only 30 minutes drive during regular traffic.

Batu (or batoe in former spelling) is an Indonesian word for a stone, and that's why you will see many stones used in the interior and ornaments of this three-star hotel. The guest rooms and bathrooms are minimalist, but they are spacious.

Situated at the corner of Kebon Kawung and Pasir Kaliki, Mutiara Hotel is within walking distance to Bandung train station, 23 Paskal Mal, and many eateries in Paskal. It is a three-star hotel that has been around since 1994 and then renovated in 2015. There are several types of guest rooms in this hotel. The hotel even offers rooms that can accommodate four guests! And the swimming pool in the garden is a pleasant place for relaxing.

Another three-star hotel in Bandung that is adjacent to Paskal is the Serela Waringin hotel. The location is at Kelenteng street, the new Chinatown in Bandung. Hence, it is surrounded by many food vendors and near the Budha temples. You only need to walk several meters to the end of the street and cross Kebonjati street to enter the Paskal Hyper Square.

Serela is a budget hotel with a minimalist style. The guest rooms are relatively small. A facility you might enjoy here is a swimming pool, albeit small.

Launched in 2015, Summerbird is a charming two-star hotel. It offers twenty-eight guest rooms, where you can choose either rustic, vintage, or the simplicity of a Scandinavian design. There are many Instagramable spots in public areas. The location is on the side street of Paskal, near the intersection of Kebon Kawung and Pasir Kaliki street.

Opened in 2012, Zodiak Hotel at Paskal Bandung is a good choice for budget travelers. The location is less than 500 meters from Bandung train station and plenty of eating places nearby. The room is small with an equally small bathroom. But, the hotel provides an electric kettle and hairdryer in the room! You can play billiard in the game room. Unfortunately, parking space is scarce.

Launched in 2014, Citradream Hotel offers 76 guest rooms. It is a two-star hotel with small guest rooms and tiny bathrooms. But, it is clean, with AC, wifi, and the staffs are friendly. Unfortunately, some guests mention that sometimes the tap water does not flow steadily.

In summary, there are many hotels in Bandung nestle at Pasir Kaliki street, from five-star to two-stars hotels. Of course, Hilton, the only five-star hotel in Pasir Kaliki Street, exudes luxury and comfort. The majority of hotels in Paskal are standard three-story hotels with modern and minimalist designs. But, you might find something different too. If you like futuristic things, you might want to try the Bobobox Pods, the hotel capsule. But if you prefer homey vibes, you might want to book a room at the Summerbird Bed and Brasserie. However, one thing is similar with all of these hotels in Bandung: scarce parking space!