Seven Favorite Hotels in Bandung
Near The Train Station

If you take a trip to Bandung by train, often it's easier to stay in the hotels in Bandung near the train station. Adjacent to the train station is a DAMRI bus pool. DAMRI is a state-owned bus company that one of its lines serves the route to Kertajati International Airport. As more flights are coming and going from the new Kertajati International Airport, many travelers arrive and depart from this pool bus. Hence, it is convenient when your hotel is within walking distance.

As soon as you have settled in your hotel of choice, it is easy to explore Bandung, either by foot or use ride-hailing apps (GoJek or Grab).

Since Bandung train station nestles in the busy downtown, there are several budget hotels within walking distance. The hotels even spread out to the adjacent Pasirkaliki and Oto Iskandar Dinata (Otista) street. There are plenty of eating places too, from food carts to restaurants. They spread out from Kebon Kawung street to Pasirkaliki, Paskal Hypersquare, and Kelenteng street. Some are open all day long, but food carts at Gardujati and Cibadak streets start selling around 5 pm. Plenty of shopping places nearby too. The 23 Paskal Mal inside the Paskal Hyper Square is seven hundred meters from Bandung train station. On the other hand, Pasar Baru Trade Center, Istana Plaza, Living Plaza, and Paris Van Java Malls are short rides from hotels in Bandung at Kebon Kawung street.

The top feature of these five hotels at Kebon Kawung street is they are within walking distance from Bandung train station and DAMRI pool bus. So, they are convenient for train travelers and airplane passengers flying from Kertajati International Airport. Even Husein Sastranegara International Airport is less than 4 km (15 minutes drive).

Opened in mid-2017, Geary Hotel is a modern and stylish three-star hotel. The hotel has 62 guest rooms, ranging from Junior-Suite, Studio, Deluxe, and Superior rooms. Each room is equipped with an electric kettle, a hairdryer, a safety deposit box, and a mini-refrigerator. Plus, there is a bathtub in Junior Suite and Studio rooms! Overall, the rooms are spacious, clean, and comfortable.

Grand Sovia is the closest hotel to Bandung train station. It is right in front of the train station, perfect for train travelers and plane passengers from Kertajati Airport.

Opened in 2014, Grand Sovia is a three-star hotel with a rooftop swimming pool. Surprisingly, there isn't any mini-refrigerator in the room! Plus, some parts of the hotel need maintenance and change of sheets.

Opened in 2010 and renovated in 2019, Mine Home becomes a relatively new two-star hotel in Bandung. It means a clean and comfortable hotel room. The hotel is approximately 290 meters from Bandung train station on the side street of Kebon Kawung. Hence, it's a bit quieter here. 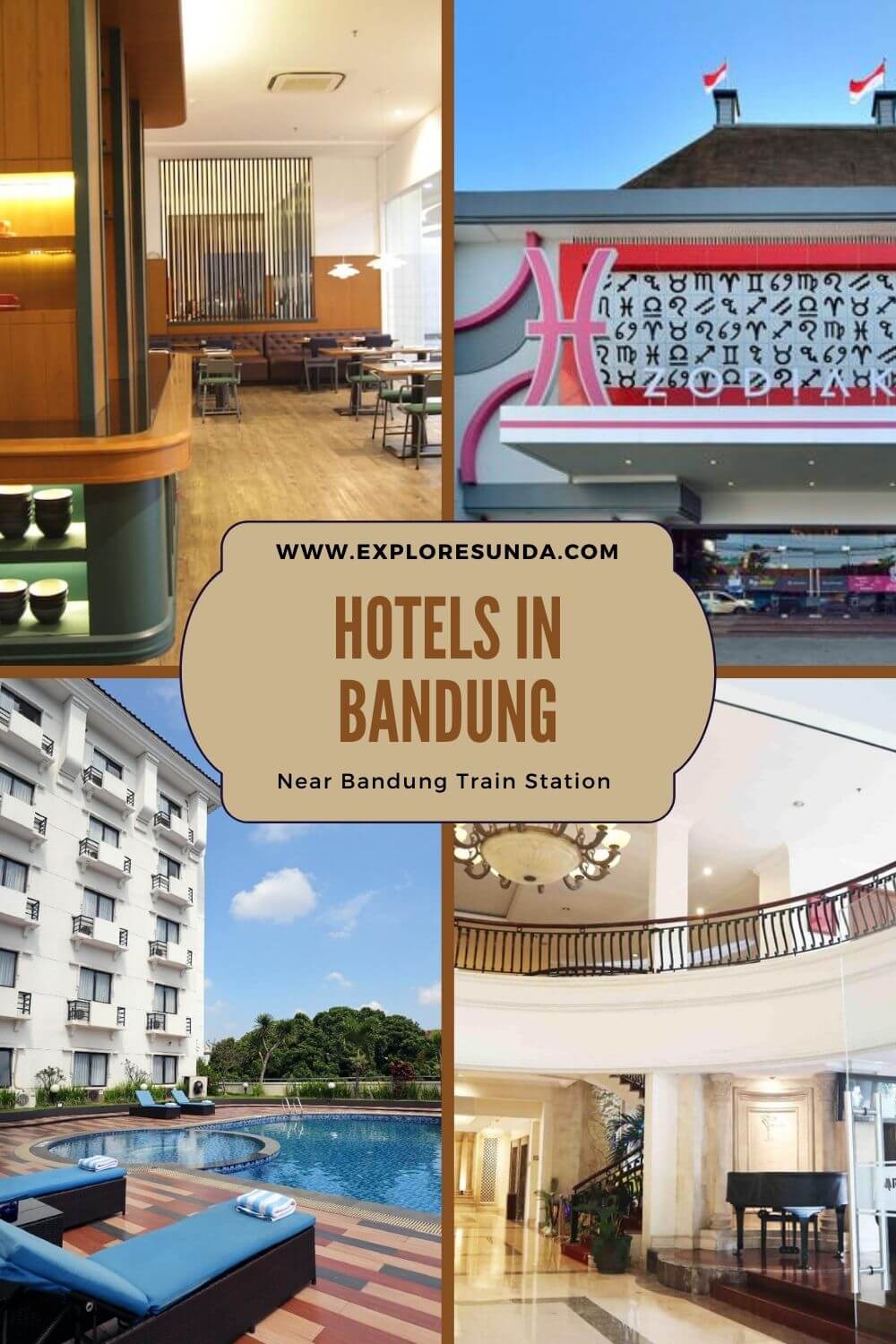 Zodiak Hotel at Kebon Kawung is also pretty close to Bandung train station (approx. 300 meters). Opened in 2014, it is a two-star hotel with standard facilities as expected of a budget hotel. Some guests mentioned the hotel needs to improve its cleanliness.

Opened in 2005 and renovated in 2015, Serena Hotel is a two-star hotel on the side street of Kebon Kawung. It is approximately 270 meters from Bandung train station. The hotel looks a bit outdated. Some guests mentioned the hotel needs to improve its cleanliness and step up on the maintenance.

When your hotel is sorted out, next is to explore Bandung. These articles might inspire you!

More hotels in Bandung near the train station

Kebon Kawung street, where Bandung train station is, connects Pasirkaliki street at one end and Oto Iskandar Dinata (Otista) street at the other end. You might be familiar with Oto Iskandar Dinata street,  which is the address of the popular shopping place, the Pasar Baru Trade Center. Presently, there are two parts of Oto Iskandar street, separated by the train tracks. Hotels in this part of Otista street are still within walking distance to the train station. From here, Pasar Baru Trade Center and Braga street are less than 15 minutes walking. Take a shortcut by walking on the pedestrian bridge on top of the train tracks.

Arion Swiss-Belhotel is a four-star hotel that was opened in 2005 and renovated in 2008. It looks like an old hotel, but the guest rooms are spacious. Its rooftop swimming pool is nice too. Plus, it has a massive parking lot in the basement. Unfortunately, you might see worn carpets and get worn sheets and towels.

Vue Palace is a three-star hotel with a swimming pool in Bandung. It opened in 2013 and undertook renovation in 2020. However, it seems some rooms have not undergone renovation yet. Plus, some parts of the hotel are not clean enough.

Are you looking for more hotels in Bandung that are near the train station? Check out hotels on Pasirkaliki street here.