Ragunan Zoo in Jakarta is the most favorite zoo in Indonesia, because this zoo has massive numbers of wild animals and a vast lawn with lots of big trees. In short, Ragunan zoo is a perfect place for a family picnic while learning the wildlife.

History of Zoo in Jakarta

The first zoo in Jakarta was established in September 19, 1864, during Dutch colonialization. It was called "Planten en Dierentuin", located in Cikini Raya street no. 73. After the independence of Indonesia, the name of this zoo was changed to Cikini Zoo in 1949, but soon it became too small. Eventually, the zoo is moved to current location at Ragunan, Pasar Minggu, South Jakarta. 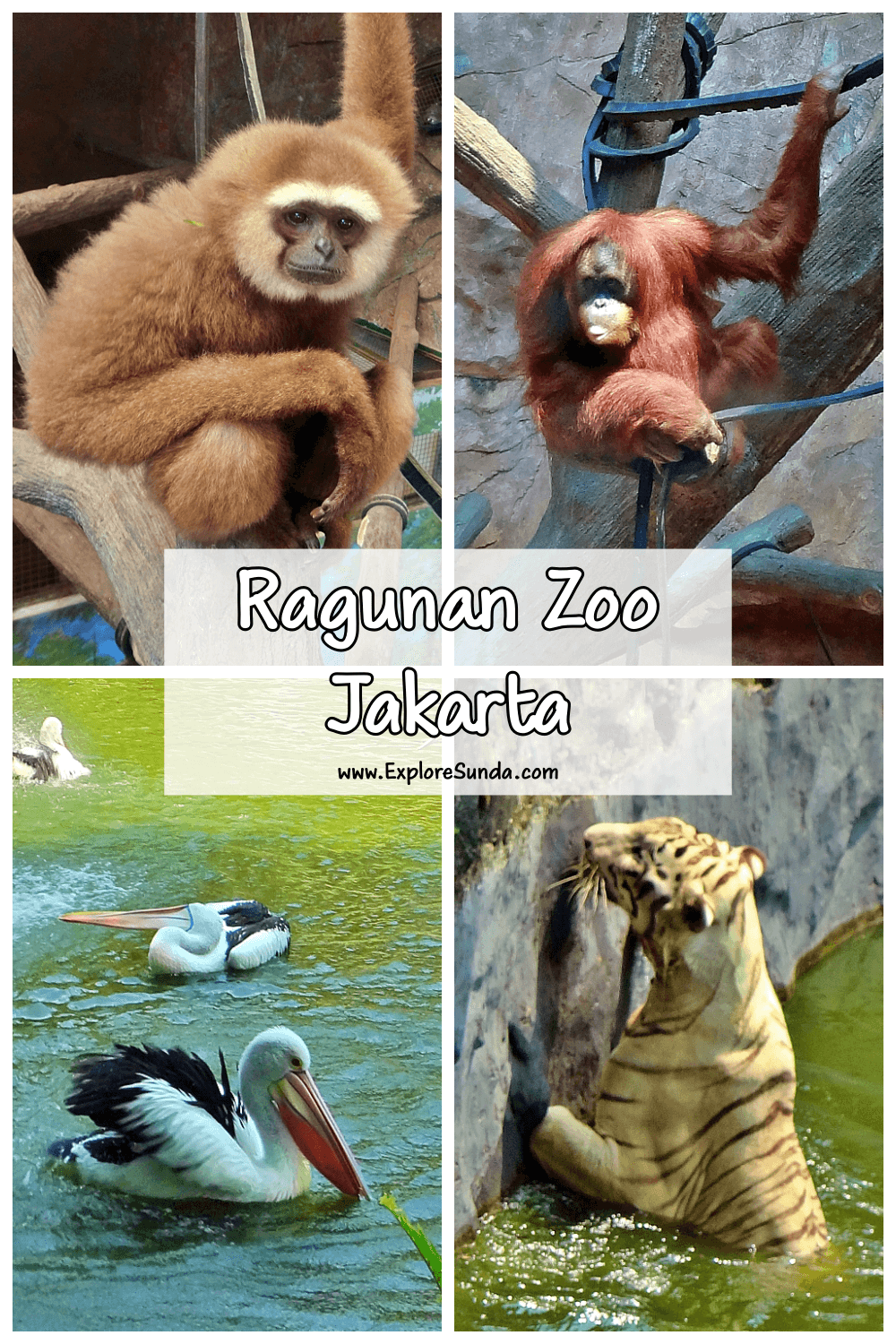 Walk Around in Ragunan Zoo

The first thing you will see when you enter Ragunan Zoo is the pelican pond. The pelicans live happily in the pond near the north gate, which is the main gate. Since the pelicans have been living here since the beginning of Ragunan Zoo, this pond becomes some kind of landmark for the zoo. 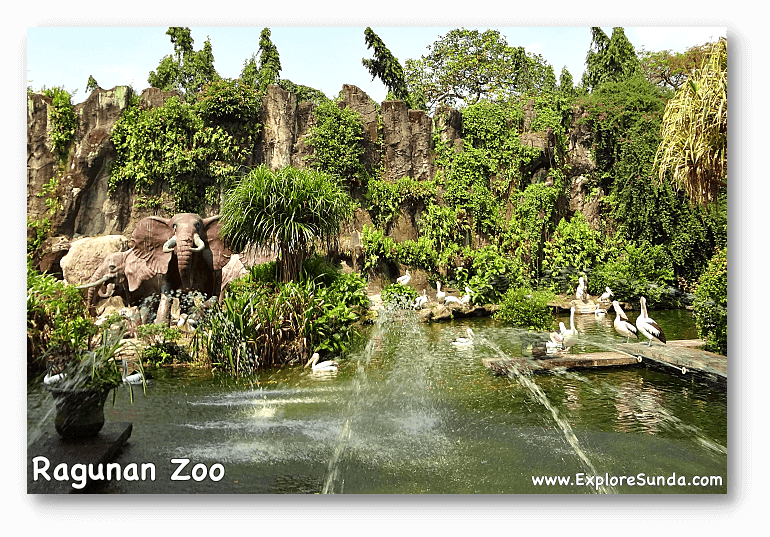 I highly suggest you go to the Information and Health Clinic building behind the Pelican pond first, to ask for the zoo map. Otherwise it would be more difficult to find the wild animals you'd like to see, since the zoo is not arranged as a grid. Moreover, the map contains feeding schedule, the time you can watch the zookeepers feed selected animals.

If you plan to spend a whole day in the zoo, you'd better pack your picnic basket :)

There is a children zoo between the Pelican pond and Health Clinic building. The brochure mentioned an Arapaima Gigas, a giant fish from South America lives in an aquarium there.

After that, you have to walk further up and down hill to see the wild animals. Unfortunately, when we visited Ragunan Zoo, most of the animals were inside their cages, so many of the habitats we saw were empty. We did see lions, bengal tigers, various birds and monkeys though.

However, walking in a 147 hectares park under Jakarta's warm weather is very challenging. I think it is more fun to rent a bike to circle the park. Alternatively, you can ride a mini train or a horse cart, but you can not go very far, since they have their own trails. 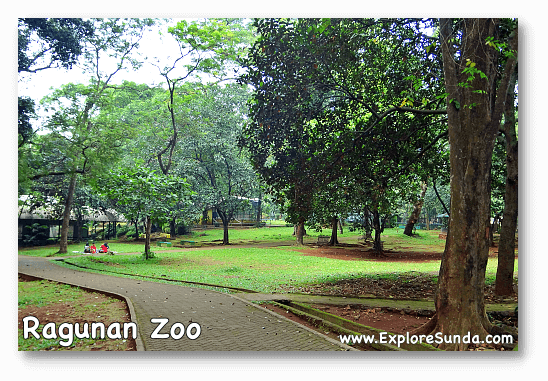 Ragunan Zoo is also a place for family recreation. There are several rides children can play in the Children's Playground. There is a lake near the east entrance, where you can buy tickets to sail on a dragon boat circling the lake or rent a pedal boat. You also can ride horses, camels, and elephants.

What if you are tired? Ragunan zoo has many big lawns with old trees, suitable for picnic. There are several cold drink sellers too. There are few canteens, but it would be better to bring your picnic basket and have a picnic in the lawn under the tree.

Schmutzer Primate Center is named after the late Pauline Antoinette Schmutzer. It is a 13 hectares park located in the heart of the zoo. It is the must see place in Ragunan zoo, since it is one of the largest primate center in the world.

Schmutzer Primate Center was launched in 2002. The stars in this center are Gorillas and Orang Utans. I believe this is the only place you can see a gorilla in Indonesia, since it is indigenous to Africa. On the other hand, Orang Utan is one of the endangered animals from Indonesia. 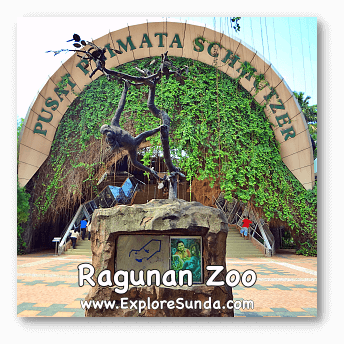 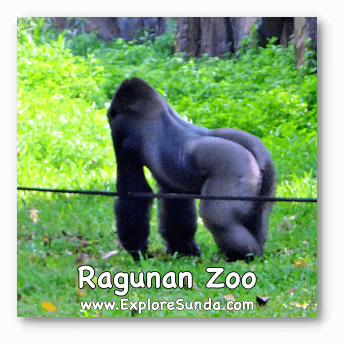 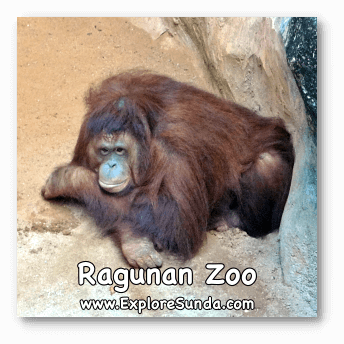 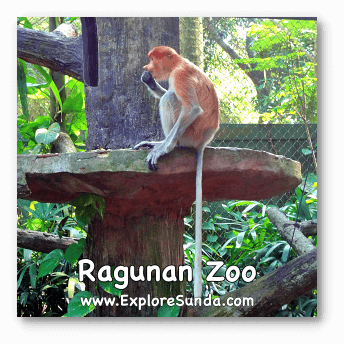 Since the concept of Schmutzer Primate Center is an open air zoo, you can walk through a bridge to see the Gorillas living in their habitat without disturbing them. The Gorillas that live here are Kumbo and Kihi, both born on May 1995 in Howletts Zoo, England. We felt so fortunate we could see one of them walking around on the grass.

Next, you should walk through Orang Utan Tunnel to see the Orang Utans live in their forest-like habitat. You might see them playing on the trees or near the windows.

Schmutzer Primate Center also has various species of monkeys, but they are all put in cages, similar to other cages in Ragunan zoo.

Don't forget to bring wet tissues or hand sanitizer since the restrooms are very basic and hand basin is very seldom in this zoo.

Although the location of Schmutzer Primate Center is in the Ragunan Zoo, but it is under different management, hence, you have to pay separate entrance fee. Your bags will also be checked by the security prior to enter the center, because you are not allowed to bring food and drink inside.

We, at ExploreSunda.com, recommends to visit the zoo early in the morning, when the sun is not too hot. The zoo opens daily at 7.30am.


View Direction to Ragunan Zoo - Jakarta in a larger map

Payment using JakCard that can be bought in the ticket booth. The card price is Rp.15,000.

The zoo is easily accessible both by private vehicles and public transportation. The address is at Harsono RM street, Ragunan, Pasar Minggu, South Jakarta. The GPS Coordinates: 6°18'21.47"S, 106°49'11.94"E.

The most comfortable public transportation that goes directly to Ragunan Zoo is Transjakarta bus, coridor 6, from Dukuh Atas under Sudirman Street to Ragunan. The last stop is right in front of the zoo parking lot. The good news is you can use the JakCard to pay TransJakarta bus fare.

There are many more places where you can observe wild animals, among them are Jakarta Aquarium, Lembang Park and Zoo, Batang Dolphin Center, and Batu Secret Zoo.