Monas
The National Monument of Indonesia 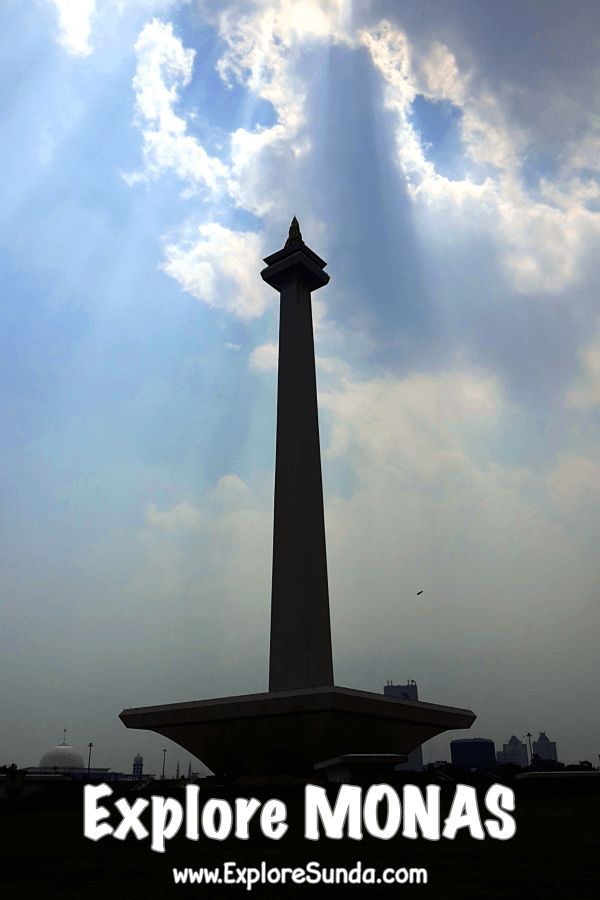 Monas (Monumen Nasional) is a very popular tourist destination in Jakarta. It is located on Medan Merdeka square, in the middle of an eighty hectare squares of land. Since the monument is 132 meters in height, it is easily spotted.

This National Monument of Indonesia symbolizes the Indonesian's fight for the freedom. Hence, some of the dimensions are related to the Indonesia's Independence date: August 17, 1945. It started to be built on August 17, 1961 and completed on July 12, 1975.

The peak of the monument is crowned with the flame of independence that looks like gold. Thus, people often joke about it, they want to take the gold from Monas. Actually, it is a bronze structure covered with gold-foils. Initially, 35 kilograms gold-foils covered the flame, but it was recoated and increased to 50 kilograms during the 50th anniversary of Indonesian independence.

Presently, the garden where Monas is located is called Medan Merdeka square. It is a city square surrounded by several important buildings, such as Istana Merdeka (the presidential palace), Museum Nasional, many ministry offices, an Indonesian army headquarter, Istiqlal mosque, US embassy, and the new National library. Gambir railway station is on the east side of the park.

Over the years the square has many names. Initially, the Dutch called it Koningsplein (King's square), while the local called it Lapangan Gambir (Gambir square), because there are many gambir plants there. In 1942, the Japanese changed the name into Ikada square (Ikatan Atletik Djakarta = Jakarta Athletic Association). After Indonesia's independence, our first President changed the name into Medan Merdeka (Independence square). Still, this place is more popular as Monas square. 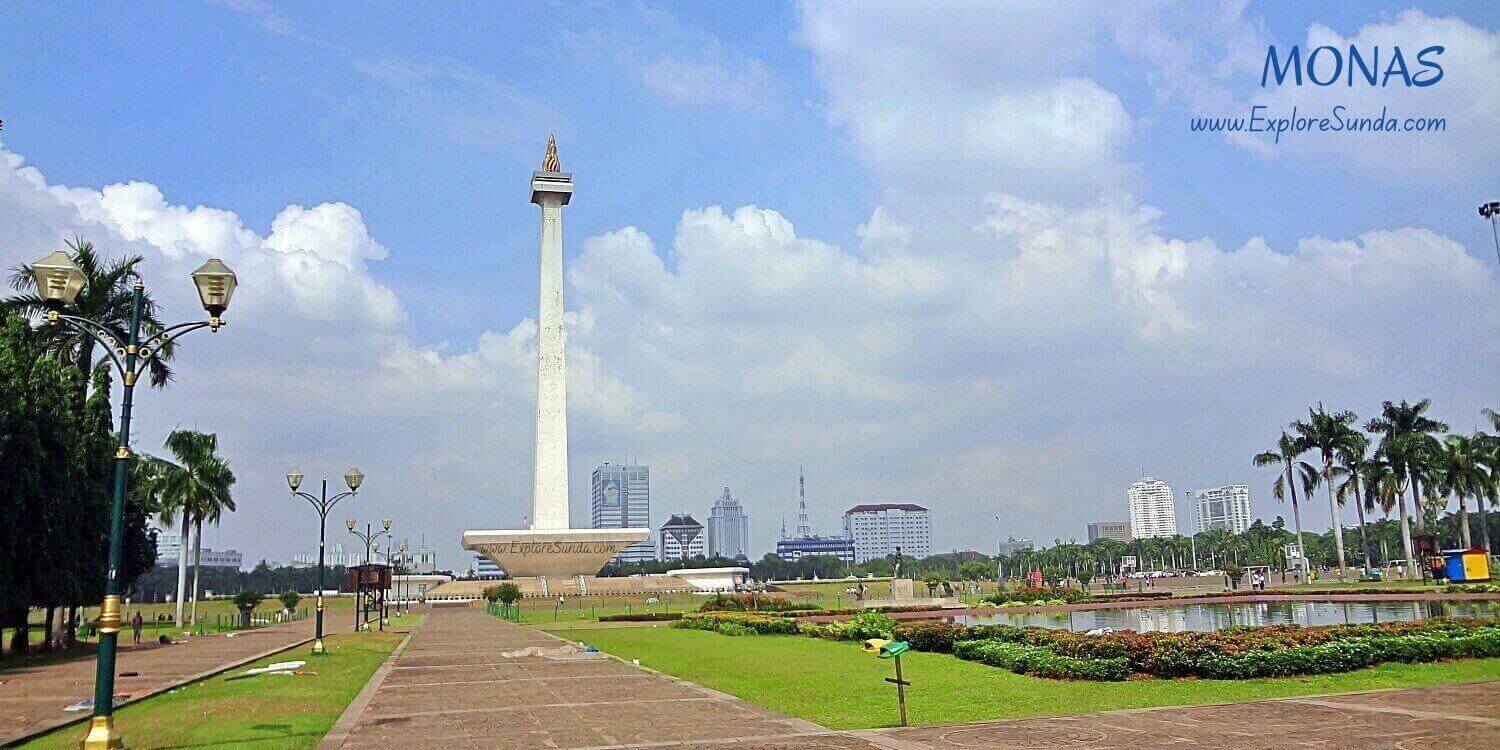 closed on Mondays except national holiday

First thing first, you should wear something comfortable for a long walk under warm to hot condition, because the garden is huge with wide asphalt roads that lead to the monument. The only way to reach the monument is either you walk or use the open air shuttle bus.

Presently, the square is fenced with four gates on each corner. Although the bus stop of TransJakarta is called Monas, you have to walk along the fence to reach the gate, unless you used the free City Tour bus. It is a nice walk though with wide pedestrian walk under shady trees.

Walking closer to Monas, you will see green iron fence surrounding the monument. Just walk along the fence until you find a big red tent across the monument. Surprise, surprise: the entrance to the monument is the stairs behind the tent!

Going down the stairs then walking through a tunnel, you will find the ticket booth. Every person must pay Rp. 30,000, which include a Jakcard prepaid card and some balance in the card. The Jakcard is a prepaid card from DKI bank, it can be topped up and used for paying TransJakarta bus fare, Ragunan zoo ticket, etc. So, if you by any chance already have a Jakcard with sufficient balance, you just need to tap the card away :) The ticket price for this gate is Rp. 5,000.

There are three areas you can explore inside the monument. First, is the semi-basement area, where Museum Sejarah Nasional (The National History Museum) is located. 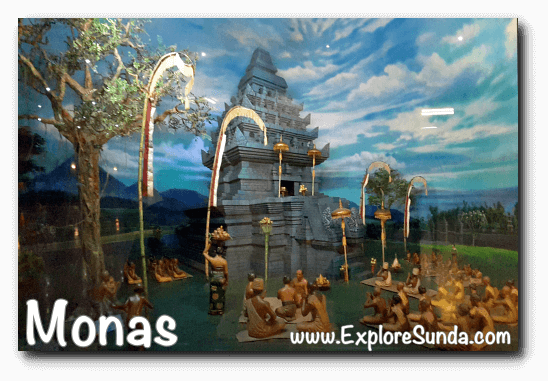 Diorama of Jawi Temple (1292AD), built under King Kartanegara from Singasari. The temple blends Sivaism and Buddhism by featuring a statue of Buddha Aksobhya on its upper part and Shiva Mahadeva on its lower part. 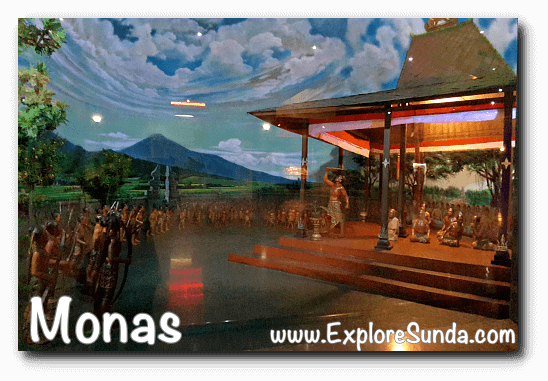 Diorama of The Pledge of Palapa (1331AD), where Gajah Mada, the Vicegerent of Majapahit, pledged not to eat Palapa before Nusantara (Indonesia Archipelago) has been united under the reign of Majapahit.

This museum displays many dioramas depicting the important points in the long history of Indonesia, from the prehistoric era to the golden era of Majapahit and Sriwijaya, then the rise of Indonesian intellectuals during European colonization. It continues to the Japanese invasion prior to World War II and culminates with the Indonesia Independence Proclamation on August 17, 1945. That's not the end of the fight for freedom though, Indonesian struggle to keep the independence for several years after that. Finally, the dioramas display the development Indonesia has achieved. 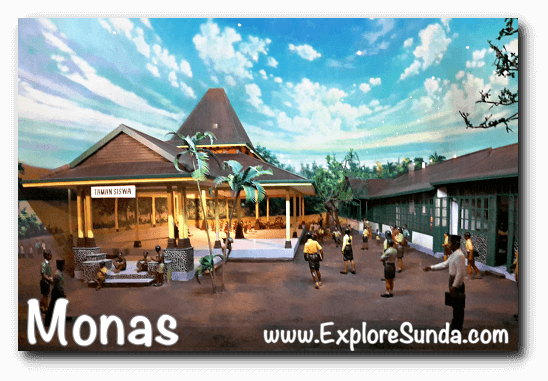 Diorama of Taman Siswa founded by Ki Hajar Dewantara on July 3, 1922 in Yogyakarta. 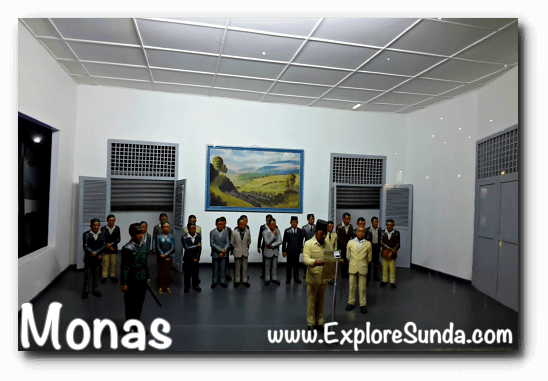 Diorama of Declaration of Indonesia Independence (August 17, 1945) by Ir. Soekarno and M. Hatta.

The Observation Deck of Monas

Next, take some stairs to the second area called cawan. It is the flat area surrounding the tower. Actually, there is nothing here. The view is good because it is several meters higher from the ground and the area near the monument are clear of any high objects, such as trees, but that's about it. 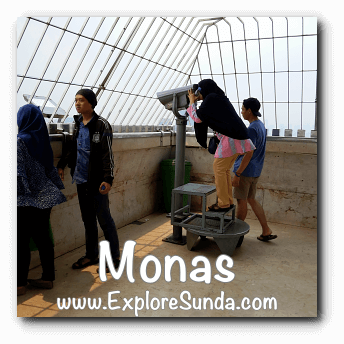 The observation deck at the top of Monas.

The third area you can access is the observation deck on the top. There is only one elevator to go up and down. Hence, often there is a long queue both to go up and to go down. The number of visitors is also limited: the total of 2,000 persons during the day and 500 persons at night

Before you enter the elevator, you have to tap your ticket (the Jakcard prepaid card). The ticket price to go to the observation deck is Rp. 15,000.

This one and only elevator does not provide any comfort at all. It is hot, stuffy, and crowded inside. So, why people still enthuse to go to the peak of Monas?

The answer is: the incredible view from more than 100 meters above ground! We can see Jakarta from different angle. From far above, Istana Merdeka, the Presidential Palace looks tiny. You also can use the telescopes provided to see the view in more detail. 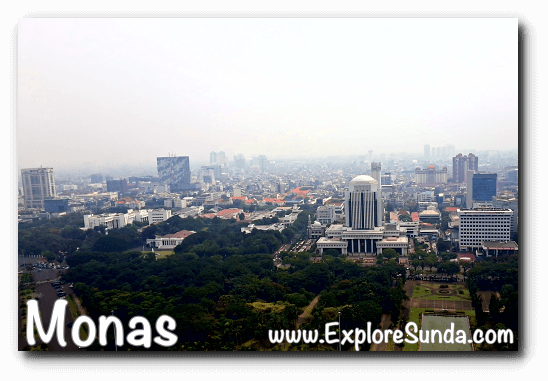 View from the observation deck at Monas: the Presidential Palace looks tiny from up here :) 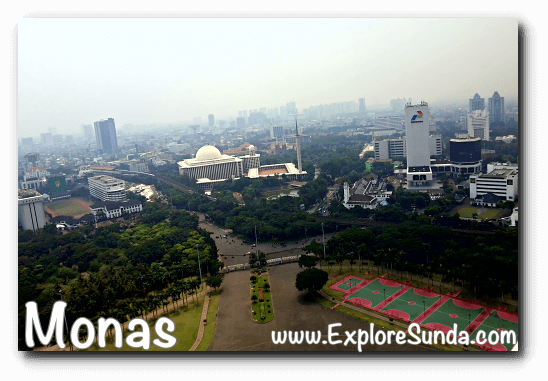 View from the observation deck at Monas: the Istiqlal Mosque seems very close.

In addition to the monument, the vast garden is a magnet for people to spend relaxing time there. Monas is very crowded during weekend, especially on Car Free Days, and national holidays. People come in the early mornings to exercise. People come at night on weekend to watch the musical fountain. Yes, there are many reasons for people to come and spend time here.

Jakarta has many other interesting places to visit. Museum Gajah (The National Museum of Indonesia) is just a walking distance from Monas, either enter the museum or take the free city tour bus (the double decker bus) in front of the museum to Kota Tua. You will be transported back to the golden days of Batavia (the previous name of Jakarta). Do you know that Indonesia is very rich in cultural diversity and the best way to see it in one day is by visiting Taman Mini Indonesia Indah?