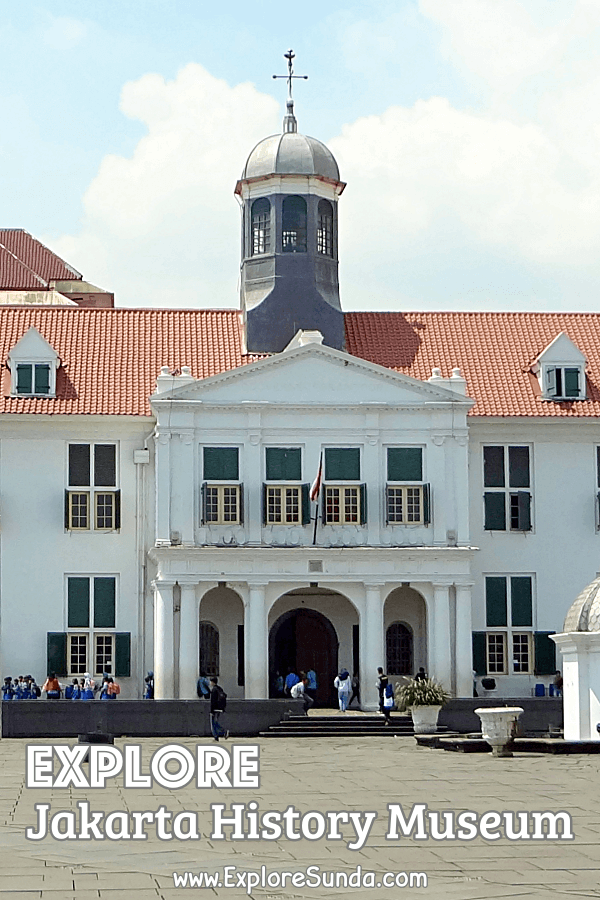 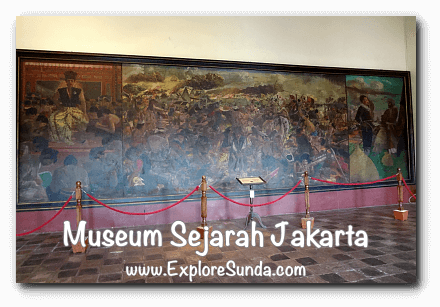 The first exhibit that greet us in front of the entrance door is a painting titled "Pertempuran Antara Sultan Agung dan Jan Pieterszoon Coen" (the battle between King Agung and Jan Pieterszoon Coen), a masterpiece created by S. Sudjojono. The size of this painting is extraordinary: 10 meters in length and 3 meters wide! It's very suitable for the grand building of this museum.

The next exhibits displayed according to the chronological order, starting with the tools from Stone Age.

The history started with the first humanization found in the bank of Ciliwung river. It is predicted to come from the Neolithic era (circa 2500 years BC).
Those flakes tools were made of tufa rocks (silicified tuff), silicified limestone, and/or sediment rocks. They were found in Kelapa Dua, Condet, and Pejaten. 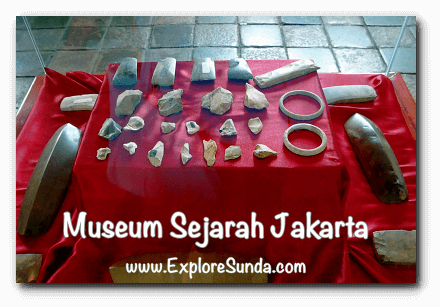 The exhibits continue to the first written artifacts found in the land of Sunda. It was created by King Purnawarman of the Tarumanagara Kingdom, a Hindu kingdom in 5th century. He had made 7 inscriptions bearing his name: 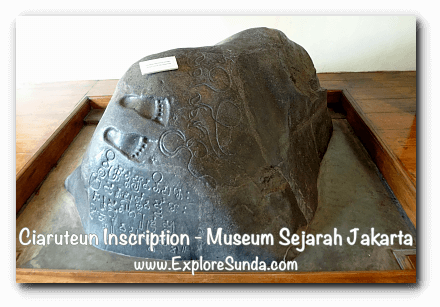 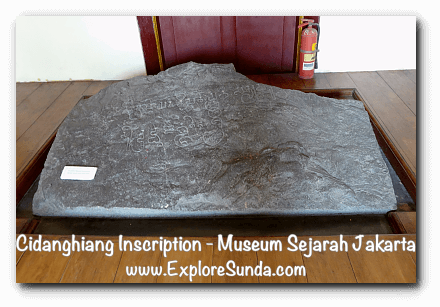 The Sunda kingdom is believed to be the successor of Tarumanagara kingdom. It ruled the land of Sunda for 6 centuries, the area stretched from Sunda strait in the west to the western part of Central Java. During Prabu Siliwangi's reign, Sunda Kalapa port (where Kota Tua Jakarta resides now) became an international trade center.

One of the artifacts found from this era is Batu Tulis Stone. 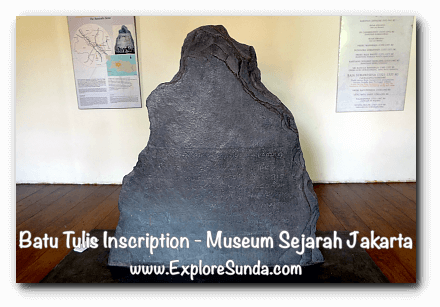 Batu Tulis Stone was found in Batu Tulis village, Bogor and it is still in situ.
This inscription was carved on a mountain-shaped stone, written in old Javanese letters and old Sundanese language. The year was 1455 Saka (1533 AD). It was a memorial for the late King.

On June 22, 1527 Fatahillah changed the name of Sunda Kelapa to Jayakarta. Nowadays this date becomes the birthday of Jakarta that is celebrated annually.

In 1619 Dutch conquered Jayakarta. They changed the name to Batavia. Batavia was derived from Batavieren, the Dutch ancestors from Germany.

The building of Museum Sejarah Jakarta was also built in this era. Thus, you will see many antique furnitures decorated this museum. 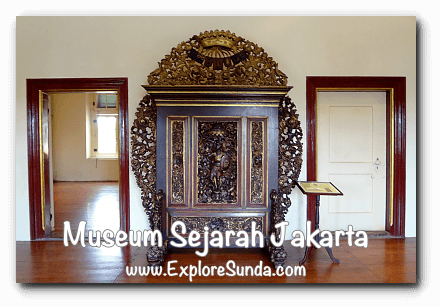 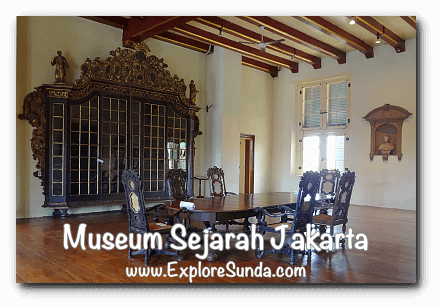 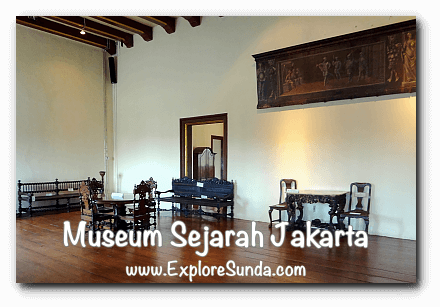 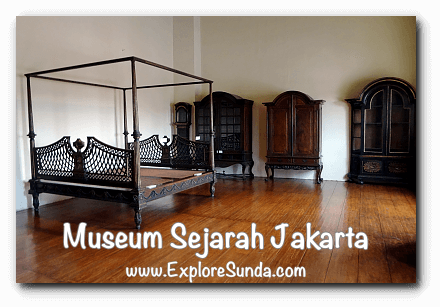 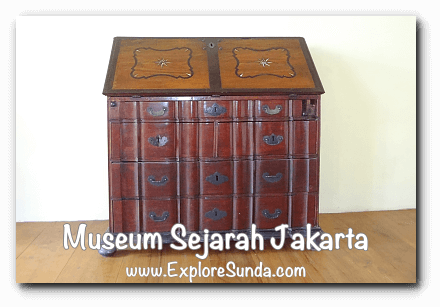 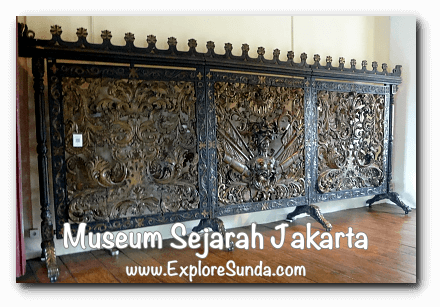 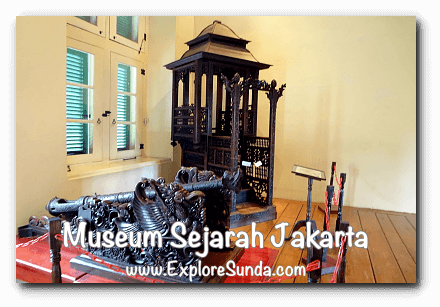 Mimbar (Pulpit) comes from an old mosque in Kampong Baru / Bandengan. The mosque was built around 1744-1748, hence, it is most likely the pulpit was made during those years. It is beautifully carved on teakwood. In 1939 the mosque staff raised funds to renovate the mosque by selling this pulpit to Batavia Genootschap (it becomes National Museum).

In addition to the indoor exhibits, Museum Sejarah Jakarta also has 2 prominent outdoor exhibits: the statue of Hermes in the back yard and si Jagur, the famous canon from Portuguese port in Malaka, guarding the front yard. 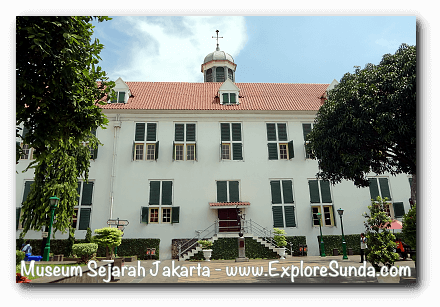 This statue of Hermes became a permanent resident in the backyard of Museum Sejarah Jakarta since 1999. The statue was built around 18th century. Originally, as Hermes was believed as the Greek god of commerce, the statue was stationed at Harmony bridge, as the gate to Hayam Wuruk street, the center of trade during that time.

Si Jagur is a canon built by Portuguese in 16th century for a fort in Malaka (a peninsula between Sumatra and Malaysia). When VOC conquered Malaka in 1641, this canon was brought to Batavia. Si Jagur weighted approximately 3.5 tons, and 3.81 meters in length. It was made of 16 small canons melted into one big canon.
The rear end of this canon is in the form of a female hand. There is a belief that it will give fertility to any woman who touches it. 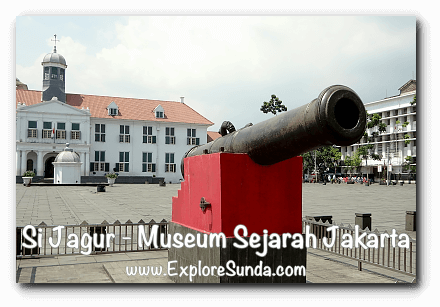 Thousands of artifacts inside Jakarta History Museum each has its own history to tell. But the building itself has a unique and long history, originally built as a city hall complete with the dungeon, survived through many wars, until it became a distinguished museum.

Besides, becoming a distinguished museum is not happening instantly. It started as a small museum named Oud Batavia Museum in a small building near the city hall.

Which all will be revealed in the next article...

NEXT: From a City Hall to a Museum, The History of Jakarta History Museum