From a City Hall to a Museum,
The History of Jakarta History Museum

Jakarta History Museum (Museum Sejarah Jakarta in Bahasa Indonesia) is the biggest museum in Kota Tua Jakarta, and it resides in the largest building that originally used for Batavia city hall.

The inception of Museum Sejarah Jakarta commenced in 1936 when the Dutch opened Oud Batavia Museum. It was a private museum that belonged to Oud Batavia Foundation. This foundation bought a small warehouse at Jalan Pintu Besar Utara no. 27 and transformed it into a museum. In the beginning, its collection came from the Dutch who once lived in Batavia. Most of the collection were paraphernalia from sixteenth century, such as furnitures, clothes, books, maps, potteries, and weapons.

After Indonesia independence in 1945, the name of Oud Batavia Museum was literally translated to Bahasa Indonesia, so it became Museum Djakarta Lama (Old Jakarta Museum). However, this name didn't really represent the vision of the museum. Thus, when the ownership was transferred to Jakarta government in 1968, the name was changed again into Museum Sejarah Jakarta (Jakarta History Museum).

Since the history of Jakarta began long before the Dutch claimed it as Batavia, the museum added more artifacts. Today, the collection in Jakarta History Museum started from the prehistoric era. In total, the museum has approximately 23,500 pieces of artifacts. This massive collection can not be contained in the small museum at Jalan Pintu Besar Utara. Hence, when the collection of the museum overgrown its space, it was moved to the old city hall building nearby. The former building became Museum Wayang (Puppet Museum) until now.

Fatahillah held an important role in the history of Jakarta. He was a commandeer from Sultanate of Demak, who attacked Portuguese and took over Sunda Kelapa harbor on June 22, 1527. Since then Sunda Kalapa became Jayakarta.

From a City Hall to Jakarta History Museum 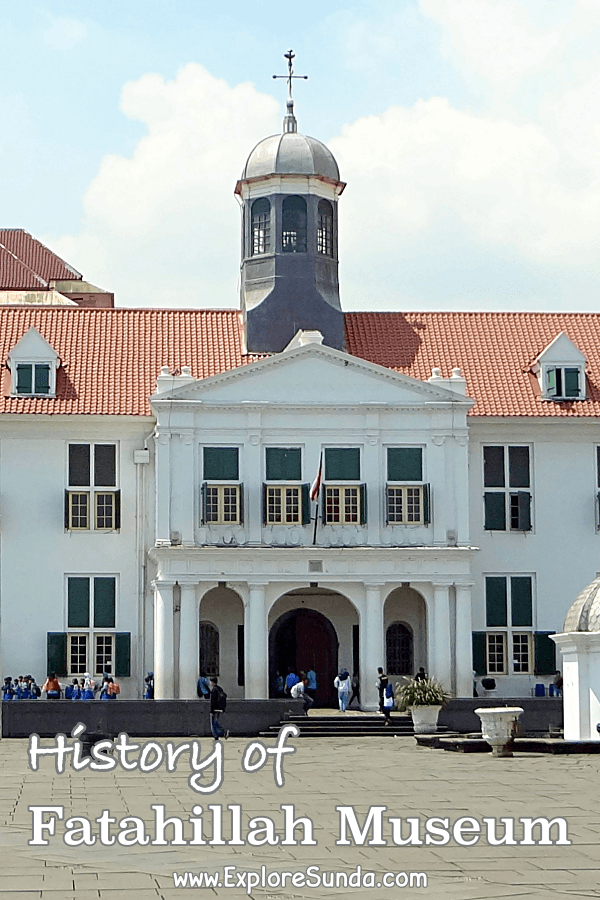 While Jakarta History Museum holds a great number of historical artifacts, the building itself also has a long history of its own:

This building was originally built for a city hall during Dutch colonization, under Governor General Jan Pieterzoon Coen. However, the present look of Jakarta History Museum is the third city hall in Batavia. The first city hall was built in 1620 on the east bank of Ciliwung river. It was lasted for six years.

In 1627, the second city hall was built on the south side of the city square. It was believed that it was a simple one floor building with a flat roof. As years went by and Batavia kept growing, this city hall became too small, hence they demolished it and built a new and larger building in the same location.

In 1707, under the order of Governor General Joan van Hoorn, the third city hall was built in the same location of the second one. Three years later it was inaugurated by his successor: Governor General Abraham Van Riebeeck. This three stories grand building resembled a simpler version of Paleis op de Dam in Amsterdam that was built fifty-five years earlier. This third city hall is the one now you see in Jakarta Old Town.

In addition to the City Hall offices and Court of Justice, it also accommodated several other functions, such as marriage registration office, orphans welfare committee, and treasury. The second city hall also used as a church (1622-1640) and a burial place for Governor General Jan Pieterzoon Coen. The church and the tomb were relocated to the new church, afterwards.

Having a Court of Justice in the city hall required some space for a jail, albeit small. The jail comprised several prison cells in the basement. It was well-known because several Indonesian heroes and heroines were held here, including Prince Diponegoro and Cut Nyak Dien. Today, the jail opens for public view, but the entrance is not inside, it is outside, at the back of the building.

When Batavia kept expanding to the south, the city hall was relocated to West Tanah Abang in 1913. Then, in 1919 they were relocated again to Koningsplein Zuid. Presently, the name of the street has been changed into jalan Medan Merdeka Selatan, and that building is still functioned as the office of Jakarta government.

In 1968, this building was transferred to the city administrator of Jakarta. Since then, it was revitalized and prepared for the opening of Jakarta History Museum (Museum Sejarah Jakarta), which finally opened on March 30, 1974. Today, it has great collections of artifacts, from stone age to the Dutch colonization that will surely tell us the long and rich history of Jakarta.

Kota Tua has more than the history of this particular museum. It has five other museums and a few historical buildings, have you checked them all out?