At the end of 2019, Lembang has a new attraction opened: Lembang Park and Zoo.

When we visited the park, it was just opened for a few days and half of it was still under construction. As we studied the map, we realized that even when it's fully completed, this zoo is still relatively small compare with other zoos and safari park we covered elsewhere in this site.

Having said that, we, at the ExploreSunda.com, believe it is still worth a visit. Are you wondering why?

What's Inside Lembang Park and Zoo? 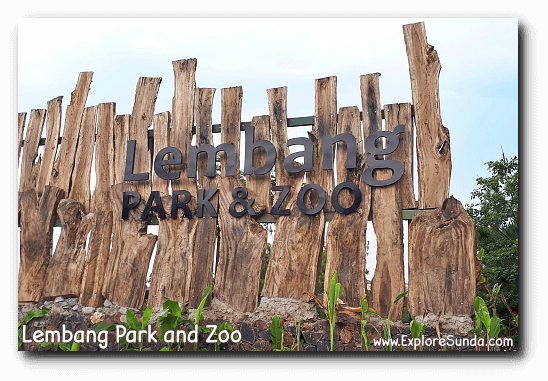 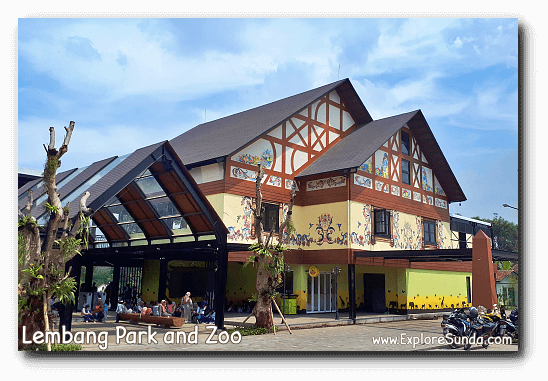 As its name implies, Lembang Park and Zoo is a combination of a park and a zoo. The first thing you will notice is each building in this park is beautifully painted, such as the old houses in European villages. 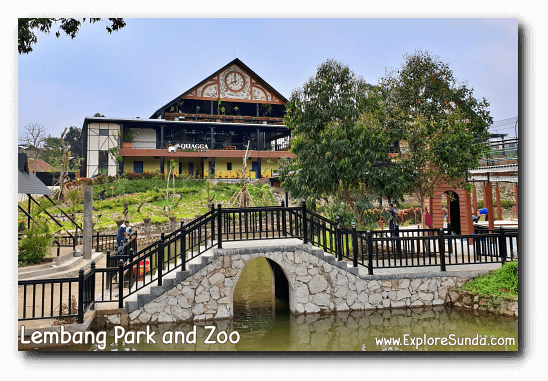 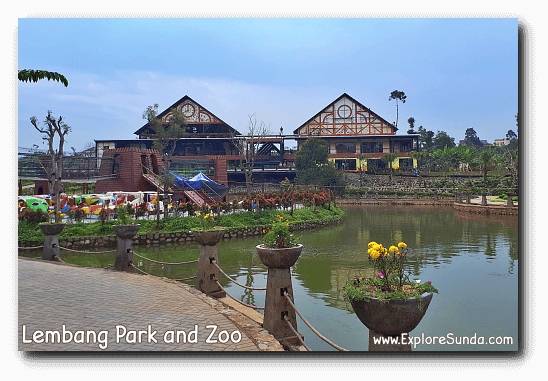 As soon as you enter the park, a beautiful landscape will be upon you: a small man-made pond with a tiny island in the middle. The island would become a place for outbound and people could rent pedal boats to circle the pond. A bit further there would be a small water park where children could slide and play water. They were still under construction, what's available presently was the horse ride circling the pond. 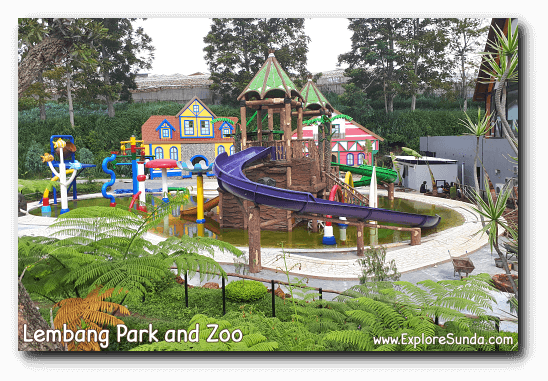 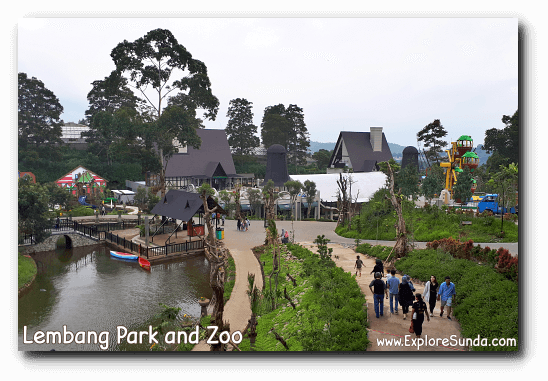 Walking further down the path, there are several wind mills on top of a food court. They are not the real wind mills though, they are snack kiosks. You have to take a couple flight of stairs to reach them. They are in the same area with a small pet shop and a cat cafe. Well, it's more like an indoor playground to interact with provided cats, while the cafe is an outdoor area with several umbrellas and one wall covered with cats painting. There is an additional charge of Rp. 30,000/hour to enter this cat cafe. 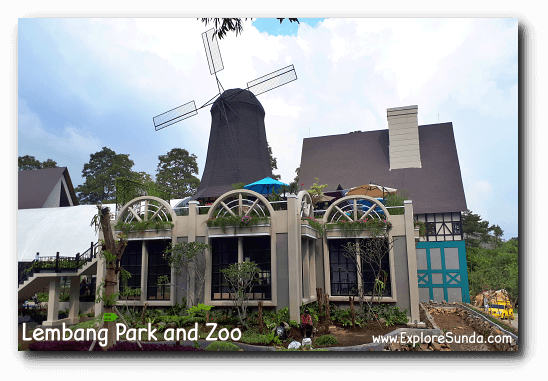 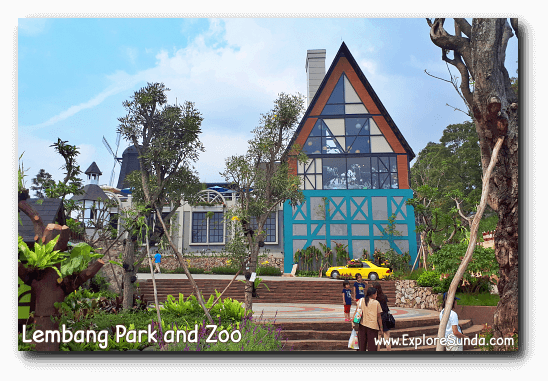 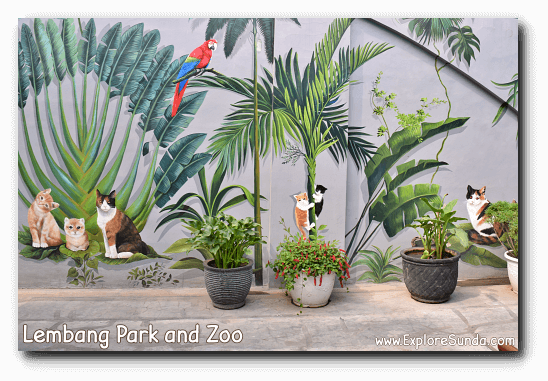 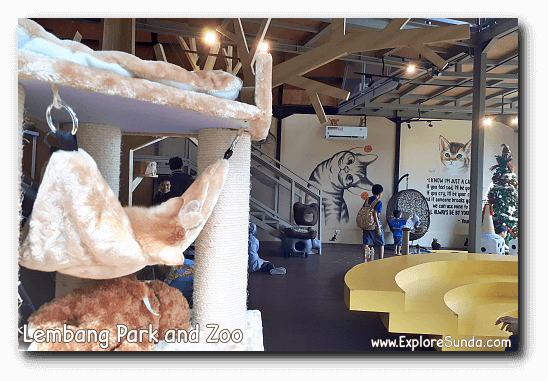 Let's keep walking down, shall we? There was a fort-like building, which would be used for reptiles. It was still closed when we were there, but some of the habitats surrounding it had been occupied. There were a small crocodile, several tortoises, and a green monitor lizard.

There is a fork in front of this reptile fort, going to the right and slightly up would take you to a children playground called Storyland with a carousel and a big blown up bouncy castle and slides. Going to the left you would enter the zoo. 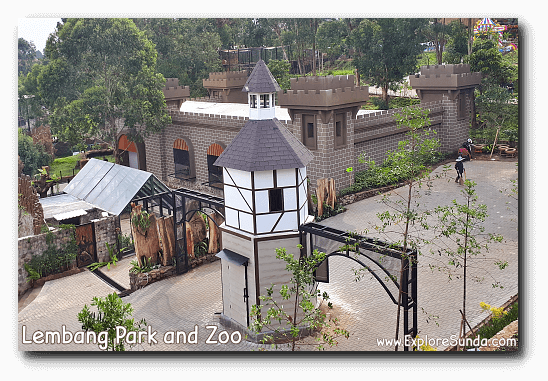 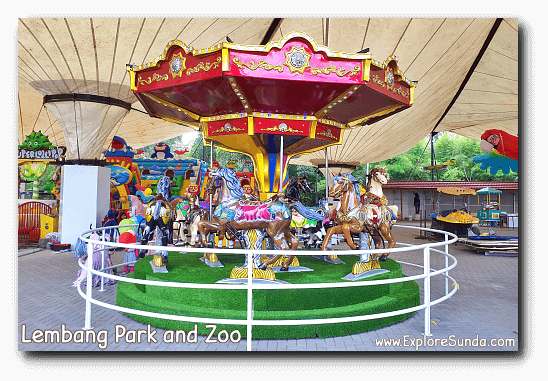 As I mentioned before, the zoo was not completely ready, some of the habitats were still under construction, such as the tiger habitat inside the foodcourt. Many of the animals were only one of each kind. For example, one crocodile, one small deer, one binturong a.k.a. bearcat, one sun bear, and one long-tailed kangaroo.

Update: I saw on the news that two baby binturong was born on May 2020, when the zoo was closed due to Covid-19 pandemic. Now they have twelve binturongs and the total of 550 wild animals lived in Lembang Park and Zoo. 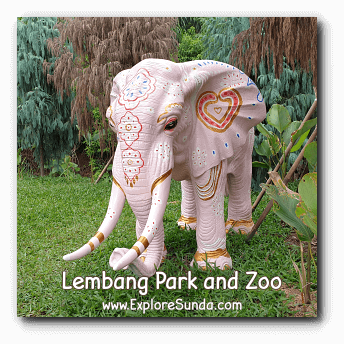 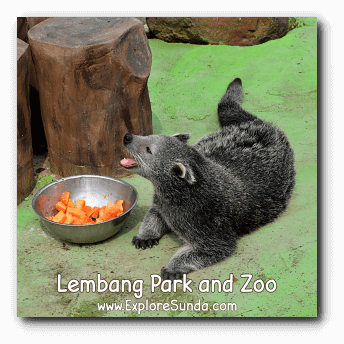 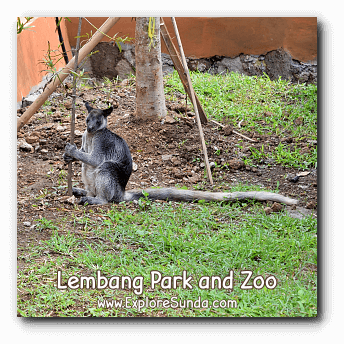 In my opinion, the highlights of Lembang zoo are the two aviaries. The larger one contains many exotic birds such as several types of cockatoos, macaw, and mandarin ducks. Ask the staff to put them on your arm or shoulder and take pictures with them. Then walk on the raised platform circling the aviary, where the birds like to perch on its railing. Here you can see the birds up close on the railing as well as watch them fly around in the aviary. 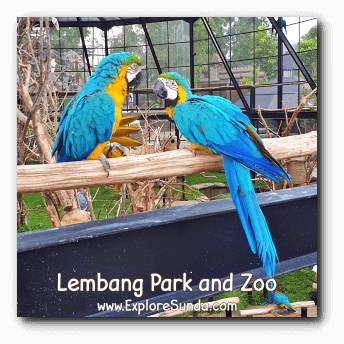 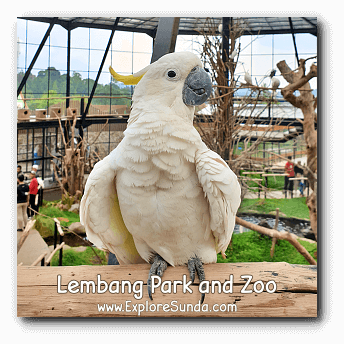 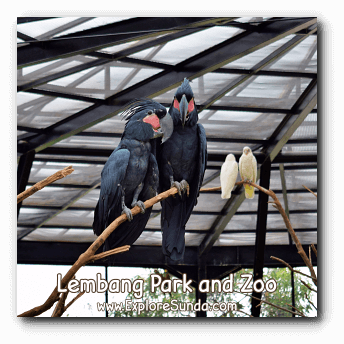 The smaller aviary contained smaller birds such as the family of starling, myna and love birds. The staff will offer you some sunflower seeds, corn or crickets to feed these birds. Just open up your palm and the birds would start coming :) 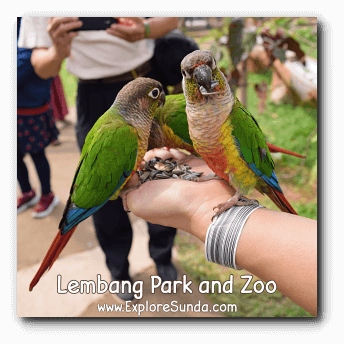 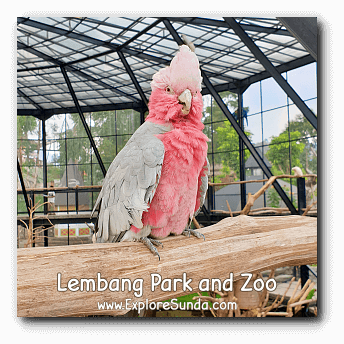 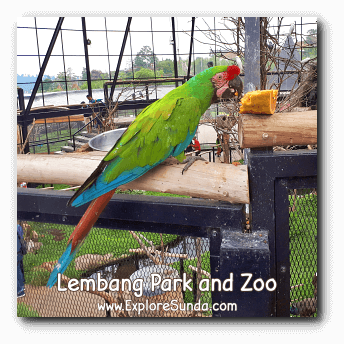 Birds are not the only animal you can feed in Lembang Park and Zoo. You can feed vegetables to the family of sheep and ostrich. Although, the ostrich is a bit aggressive. 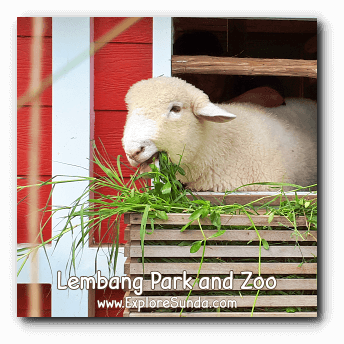 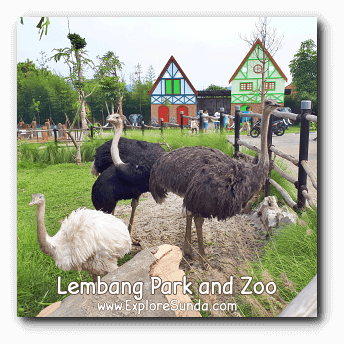 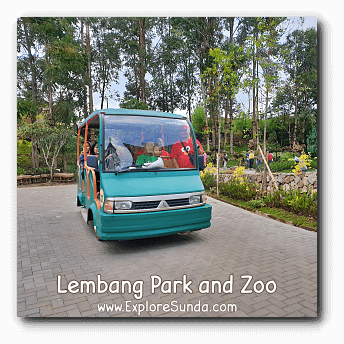 If you are tired roaming Lembang Park and Zoo, lookout for an open air car. It will take you from the corner of the park to the parking lot for free. Often the passengers ask the driver whereabout in the park, hence, it feels like a guided tour around the park. 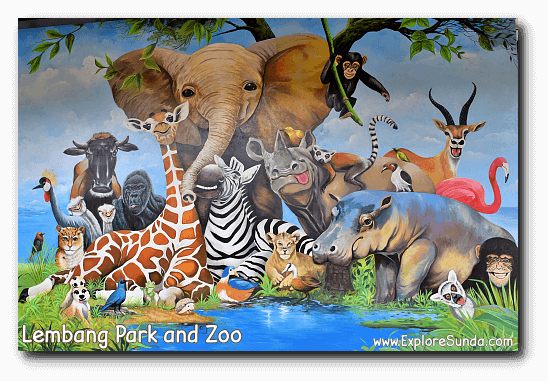 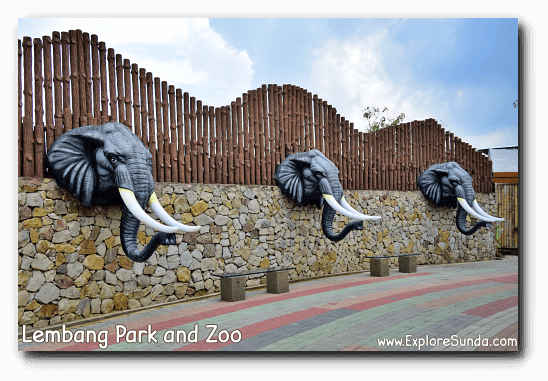 Where is Lembang Park and Zoo? 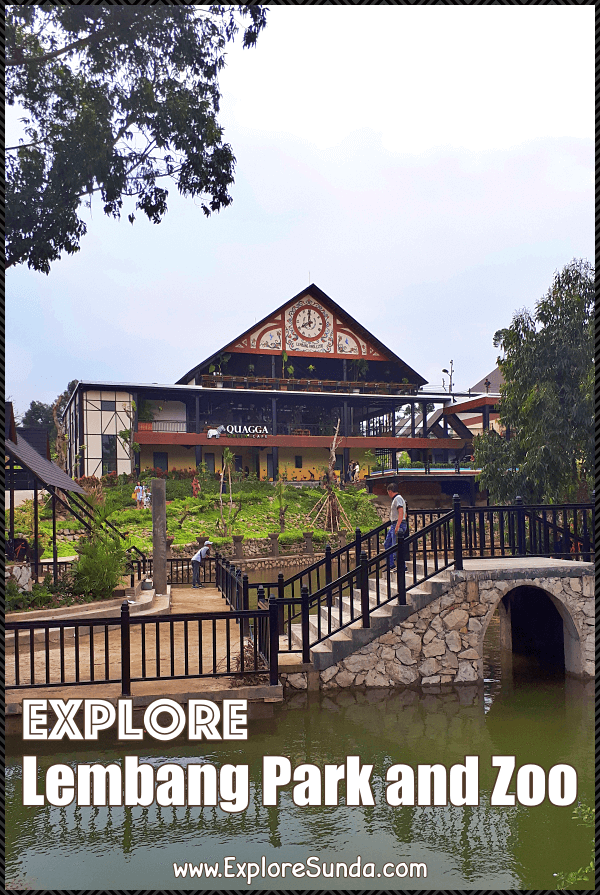 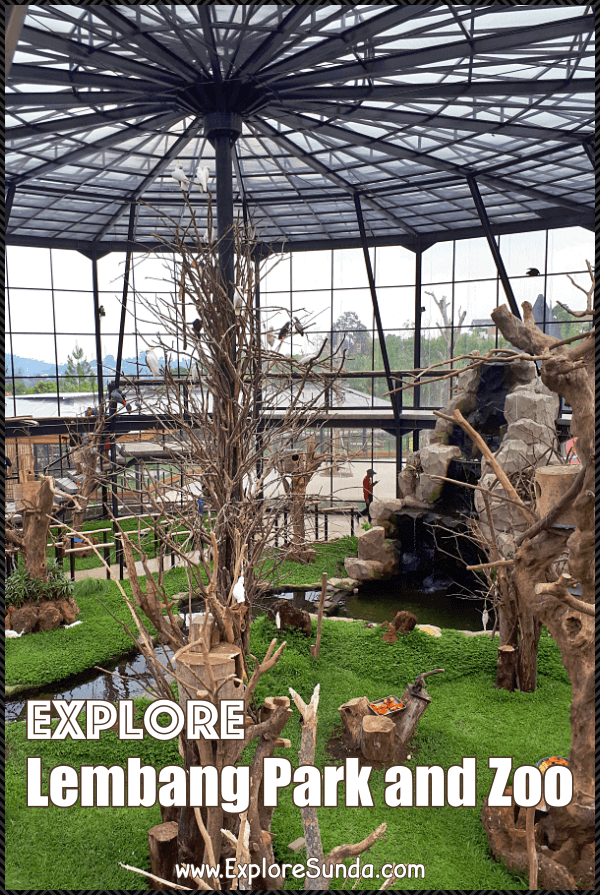 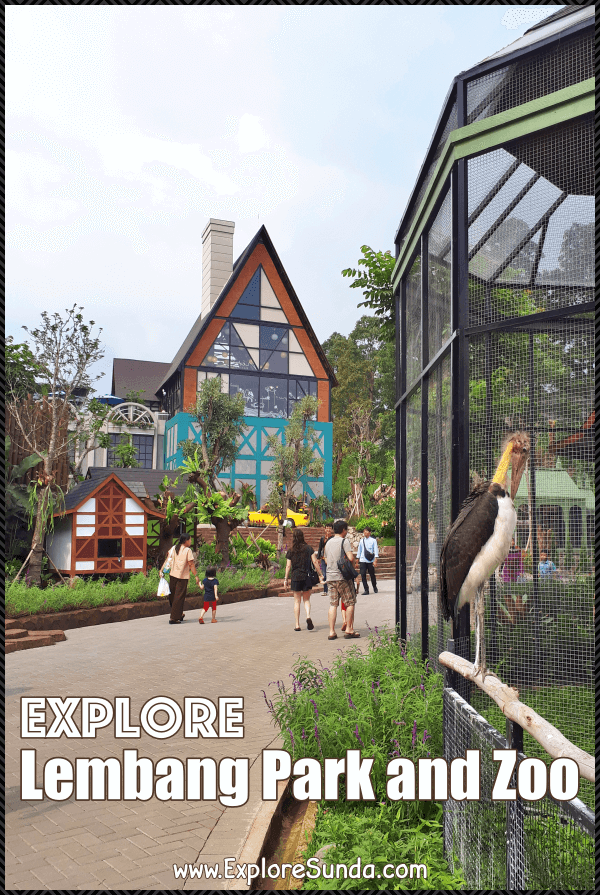 It is fun to explore Lembang Park and Zoo, with its great weather, gorgeous view and healthy wild animals. However, there are many other zoos and safari parks in the land of Sunda. For example, Taman Safari Indonesia at Cisarua, Bogor and Ragunan Zoo in Jakarta. The town of Batu in Malang, East Java also has a great zoo called Batu Secret Zoo. Which one is your favorite?

While you are in Lembang, you might want to visit these too