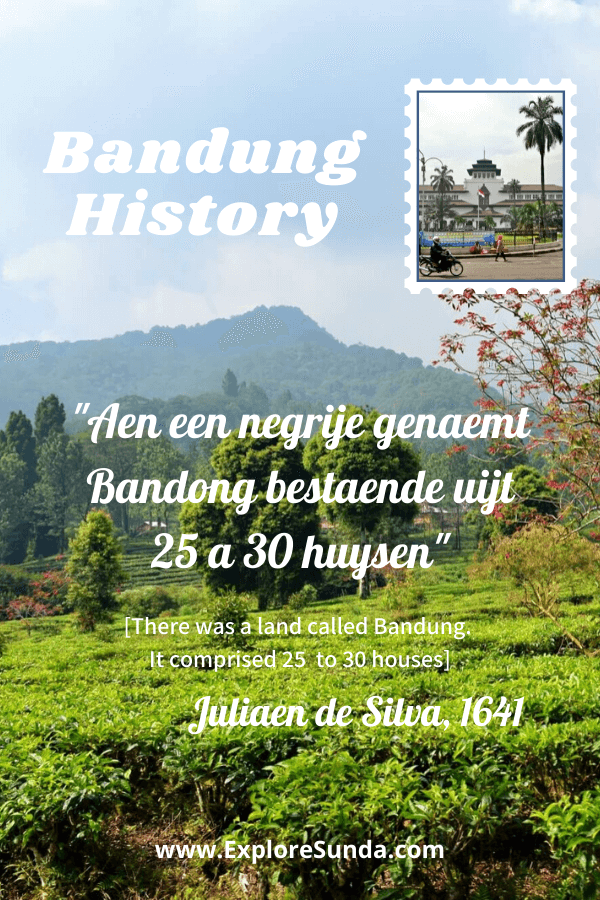 The history of Bandung is a long and colorful one. It might be in the form of famous legends such as the story of Sangkuriang or an explanation of the geographical formation creating the highland of Bandung several million years ago. But the more recent history started when a foreigner stumbled upon Bandung, then many more came and built plantations.

One day I read my dad’s book titled “Wajah Bandoeng Tempo Doeloe” by Haryoto Kunto. It is an interesting book, depicting the beginning of Bandung until its golden days before World War II.

The Dutch first came to Indonesia in 1602. It led to colonialism that lasted 350 years. But it took them forty years to finally reached Bandung. The first person sent by them was Juliaen de Silva.

In 1641 he reported, “Aen een negrije genaemt Bandong bestaende uijt 25 a 30 huysen.” (It translated loosely to, "There was a land called Bandung. It comprised 25 up to 30 houses").

At that time Bandung was still a jungle with many tigers and rhinos lived there. The ancient lake hadn’t dried up, resulted in several lakes and swamps. The locals were governed by Dipati Ukur and Tumenggung Bahureksa, under Sultan Agung Mataram.

The History of Bandung: The Rise of Preanger Planters

Then in 1712 Abraham van Riebeek landed in Pelabuhan Ratu, a seaport in southern West Java. He brought the first coffee seedlings to Java and it became the beginnings of coffee plantations in the land of Sunda.

One hundred years after the first report, VOC [the Dutch trading company in Indonesia] finally noticed Bandung. They assigned a soldier to rule Bandung. A year later, three more Dutch came to Bandung. They became rich by establishing a plantation and a sawing mill. Since then more and more foreigners came and built coffee, tea, and cinchona plantations. They became rich and known as Preanger Planters. 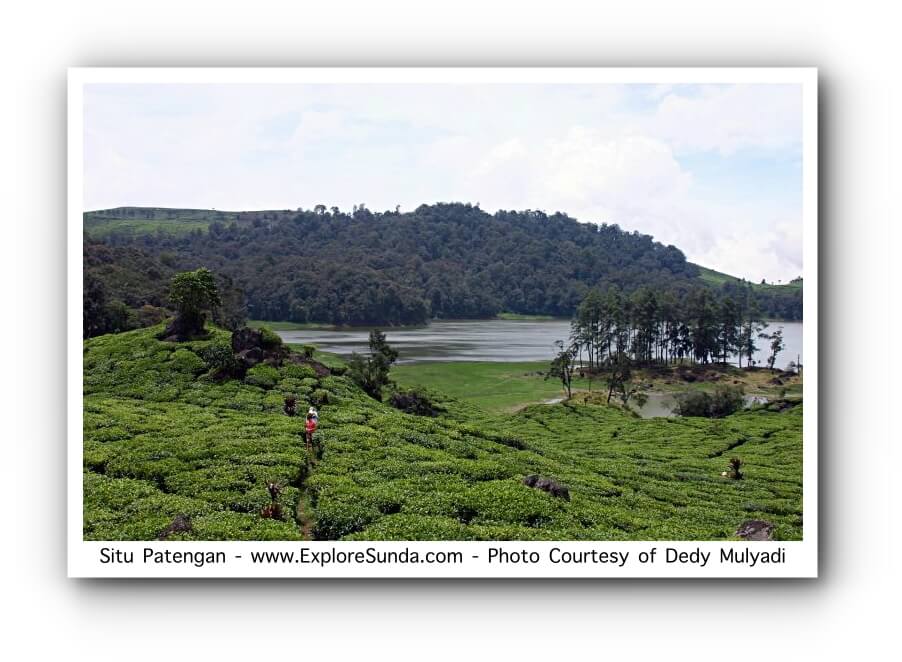 Among these Preanger Planters, some were philanthropists and loved Indonesia as their second home. Franz Wilhem Junghuhn was a German. He succeeded in growing cinchona, the essential ingredients for medicine, especially to cure malaria. Once upon a time, Bandung supplied 90% of the world’s chinchona.

Piter Engelhard succeeded in growing coffee, first at the slope of mount Tangkuban Parahu, then at mount Patuha, mount Mandalawangi, mount Galunggung, and mount Malabar. His coffee was famous as “Javakoffie”. 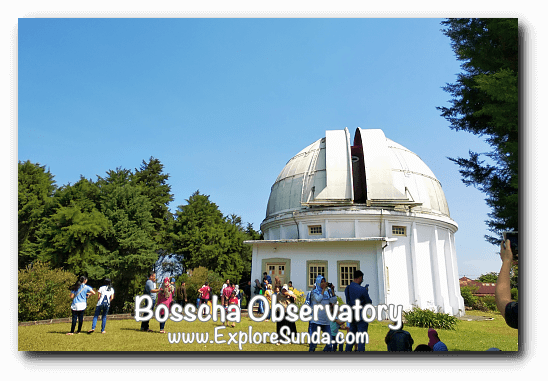 K.A.R. Bosscha was called “thee koning” (the king of tea) from the Malabar plantation. He took part in establishing “Technische Hoogeschool”. Presently it is known as Institut Teknologi Bandung (Bandung Institute of Technology in English) and 100 years later it is still the leading university in Indonesia.

He also built the Bosscha observatory several kilometers north of Bandung. It is still functioning properly and it welcomes visitors on Saturdays.

Once these plantations were thriving, how to transport them to Batavia for shipments to the Netherlands became a problem.

History of Bandung: Mode of Transportations

Presently, the distance between Jakarta and Bandung is approximately 150 kilometers. There are several roads you can choose, but the most popular ones are:

The second option takes a shorter time, but on average it takes three to four hours to travel from Jakarta to Bandung and vice versa.

But 400 years ago, it was a very different story!

The transportation history in Bandung started with water transports. Sailing on a boat through Citarum and Cimanuk rivers was the only mode of transportation available to travel to Bandung until 1786.

Then people started to build a horse trail between Batavia (Jakarta) - Bogor - Puncak - Cianjur - Bandung. It was a very rough terrain though. Somewhere near Puncak, they used buffalos to help the horses pulled the cart.

When Daendels became the Governor-General of the Dutch East Indies, he was assigned to strengthen the military defense in Java by building a road. It was called Grote Postweg (The Great Postal Road in English or Jalan Raya Pos in Bahasa Indonesia). It was a thousand kilometers road, from Anyer in the western tip of Java to Panarukan in East Java. 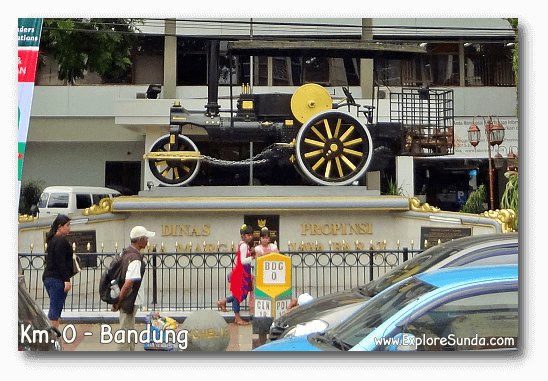 The postal road between Batavia (Jakarta) and Bandung used the existing horse trail. But when it reached Bandung, it was eleven kilometers north of the existing downtown. Hence, Daendels ordered the local ruler to move downtown. Presently, the former downtown was called Dayeuhkolot.

When Daendels inspected the postal road and the new downtown, he stabbed his stick and ordered them to build a town there, ready for his next inspection. That place became km. 0 of Bandung.

Even after the Postal Road was established, to travel from Batavia to Bandung took almost three days!

Eighty years later, a railroad was built connecting Batavia, Bogor, Cianjur, and Bandung. Fifty years later they built another railroad from Batavia via Cikampek - Purwakarta to Bandung. Today, only the latter is still functioning. The former is only used for a commuter line between Jakarta and Bogor.

The traveling time using the train only took 2 hours and 45 minutes! When the railroad was expanded to Cilacap in Central Java to Yogyakarta and ended in Surabaya in East Java, Bandung became a stopover, resulted in the tremendous development of Bandung. 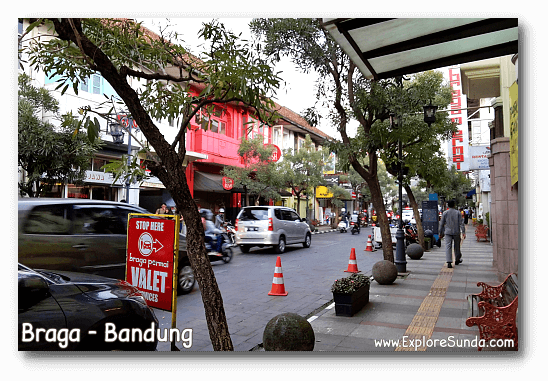 The history of Bandung recorded that it reached its status as a Gemeente (a township in English) in 1906, 265 years after de Silva’s visit.

Since many Europeans lived very comfortably here, it was known as “Europa in de Tropen”, Europe in the Tropics. The lively Braga street made Bandung famous as Parijs van Java (Paris from Java).

The thriving plantations created many rich Preanger Planters and supported the Netherlands fighting its wars. But most of the locals lived in poverty unless they were nobles or royal families. Thus, when the Netherlands tried to return to Indonesia after Indonesia announced its independence, the locals fought fiercely. They ended up burning half of Bandung. It was the most heroic battle in the history Bandung. The battle was known as Bandung Lautan Api (loosely translated as Bandung became a sea of fire).

Bandung has grown tremendously since then. The city was rebuilt after the incident of Bandung Lautan Api. But, if you look closely, you will only find the old houses and art deco style buildings from the railroad to the north.

This is only a short history of Bandung in its early days. At that time the Preanger Planters already promoted Bandung, hence many tourists came to experience its cool weather and beautiful nature. Presently, Bandung has already become a modern city and it is still one of the most sought places for vacations.