The Insect Museum (Museum Serangga in Bahasa Indonesia), the Fresh Water World (Dunia Air Tawar), and the Bird Park represent the diversity of fauna in Indonesia. You can easily explore them all in Taman Mini Indonesia Indah :)

Here, we will talk about the first two: Museum Serangga and Dunia Air Tawar, since they are next to each other and you only need to buy one ticket to access both places.

1. The Insect Museum and Butterfly Garden

The tropical rainforests in Indonesia are home to tons of various insects. Scientists estimated about 16% of the world's insects come from Indonesia. Since insects are small, it would be difficult to observe them in their habitats. That's when the Insect Museum becomes handy :)

The first thing you will see upon entering this Insect Museum is a large map of Indonesia. It has information on the spread of the insects.

So, there are thousands of preserved insects there, in various sizes. My favorite is the colorful butterflies. They are so beautiful. Every area in Indonesia has its distinctive butterflies. This Insect Museum even has one diorama specifically for the butterflies from Bantimurung, a place in South Sulawesi that is famous for its exotic butterflies.

On the other hand, the Insect Museum also has vast collections of beetles. Some look horrid, but they all have their purposes in the ecosystem, as shown in the dioramas.

One fascinating collection of this Insect Museum is the one-of-a-kind insects, anomalies to their species. For example, a butterfly with different colors and patterns on each side of its wings, butterflies with wings that look like dried leaves, and a bark-looking locust.

One thing special from the Insect Museum in Taman Mini is, in addition to its preserved collections, it also keeps living insects. Plus, there is a small butterfly park at the back of this museum. If you are lucky, you will see many butterflies there. Butterflies are day creatures, meaning they tend to be more active in the morning.

Finally, near the exit door of this butterfly garden, you will see several cages containing small animals, such as squirrel, opossum, lizard, mouse deer, and tarsier. But I am not sure how these animals relate to the theme of the Insect Museum. One possibility is because some of these animals eat insects as part of their diets. 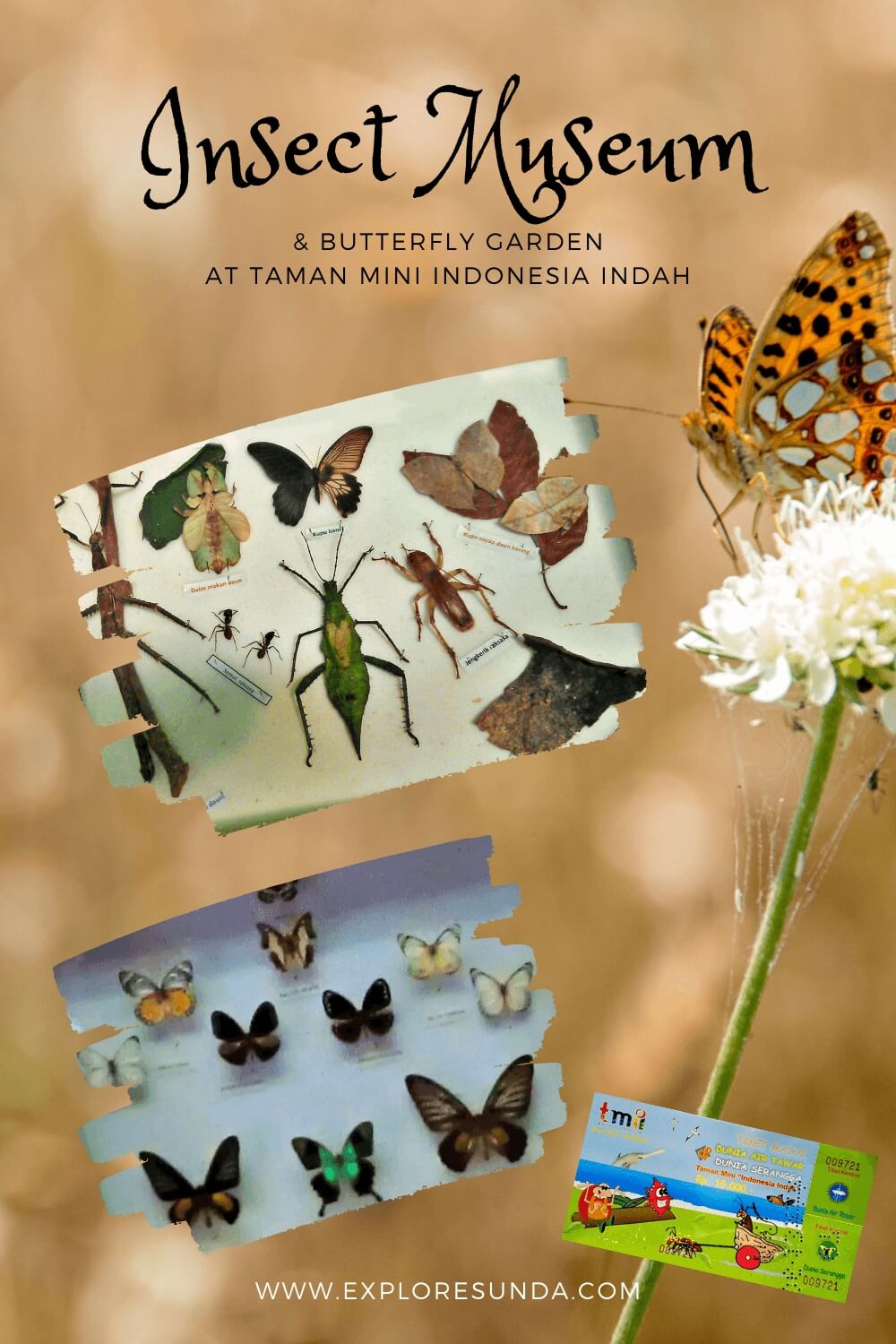 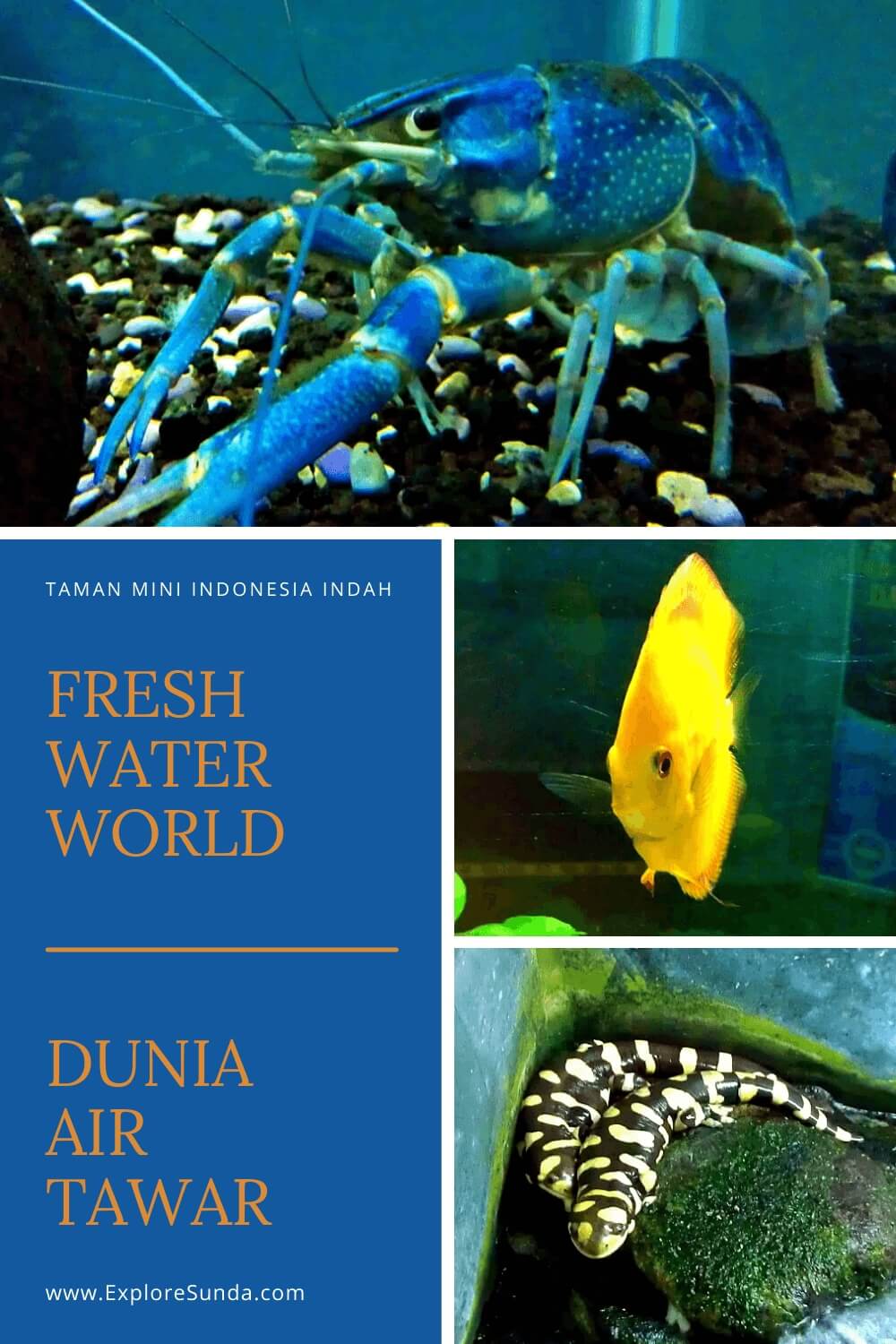 As a tropical country, the rivers and lakes in Indonesia are rich with exotic freshwater fish. You can see some of them in the Fresh Water World at Taman Mini Indonesia Indah.

The building is round, with an example of the river and brackish ecosystems at the center. Most of the displays are fishes, both local fishes, and imported fishes. Each aquarium has a label informing the name of the fishes and their origins. You also can see rare freshwater species here. Freshwater lobsters, salamanders, and albino soft-shell turtles are some of them.

Overall, the building itself is not in its best shape. Thankfully the fishes and other freshwater animals here are healthy. Although, some aquariums look too small to contain them.

One more thing worth mentioned here is that both Insect Museum and Fresh Water World provide some training. They are for people who want to learn how to breed and grow insects, ornamental fish, catfish, prawns, lobster, etc.

Taman Mini Indonesia Indah has a lot more to offer. It has beautiful traditional houses, 18 museums, parks and gardens, the bird park, rides, cinemas, and theaters.