The bird park in Taman Mini Indonesia Indah (TMII) is on the top list of our recommendations for places you must see in TMII. Here you will see exotic birds from all over Indonesia inside giant domes.

Explore The Bird Park in TMII

Taman Mini has two bird parks. The first one has become a Conservation Park. So, the bird park on this page refers to the second bird park.

In 1859, Alfred Russel Wallace drew an imaginary line that runs from Makassar strait (between Kalimantan and Sulawesi) in the north to Lombok strait (between Bali and Lombok) in the south.

He observed that the characteristics of animals that were on the west of this line were similar to Asian animals. On the other hand, the animals that lived on the east of the Wallace Line had similar traits to Australian animals.

Moreover, the islands near the Wallace Line are called Wallacea. It because the animals, including the birds, stay put in this area, and over time they diverged into distinctive animals.

The best part of the bird park in Taman Mini Indonesia Indah is the domes are so enormous. The roofs of the bird park are so high that you will not feel claustrophobic. Many birds fly or walk freely, except the predators such as albatross, Javan Hawk, and eagles. They live in huge cages that are circling every side of the domes.

Following the walking path inside these giant domes, you must walk through a tunnel to shift from the west to the east dome. There is a small rest area in the middle of the tunnel. It looks like an open cave facing a pond, where you can feed black swans and golden fish. There live pelicans too, but they don't like to get close to humans. 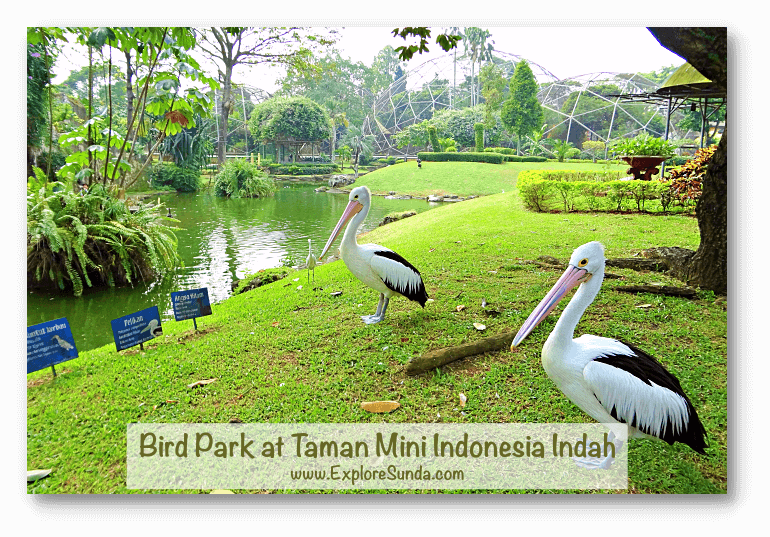 Birds in this bird park are the combination of the common birds that you can freely buy in the market and endangered species, such as the birds of paradise and maleo.

There are many beautiful peacocks. Blue peacocks (Pavo cristatus) and green peacocks walk freely inside the domes. Often they show off their beautiful tails. Look at the trees; you might see some birds of paradise (cendrawasih in Bahasa Indonesia) perch on the branch. A couple of storks and pelicans also walk freely outside the domes! 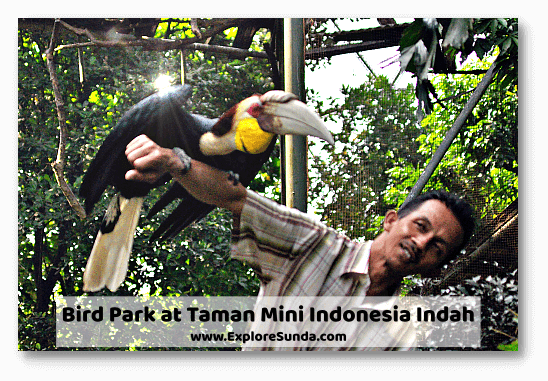 You can take pictures with some birds, such as a toucan, black cockatoo, white cockatoo, and eagle! You only need to pay Rp. 5,000 for a pose with one bird, then you can take as many pictures as you want :)

The bird park in Taman Mini Indonesia Indah lies on a vast lawn. So, the gardens are both inside and outside the giant domes. Big birds, such as cassowary, live in a corral near the exit gate. 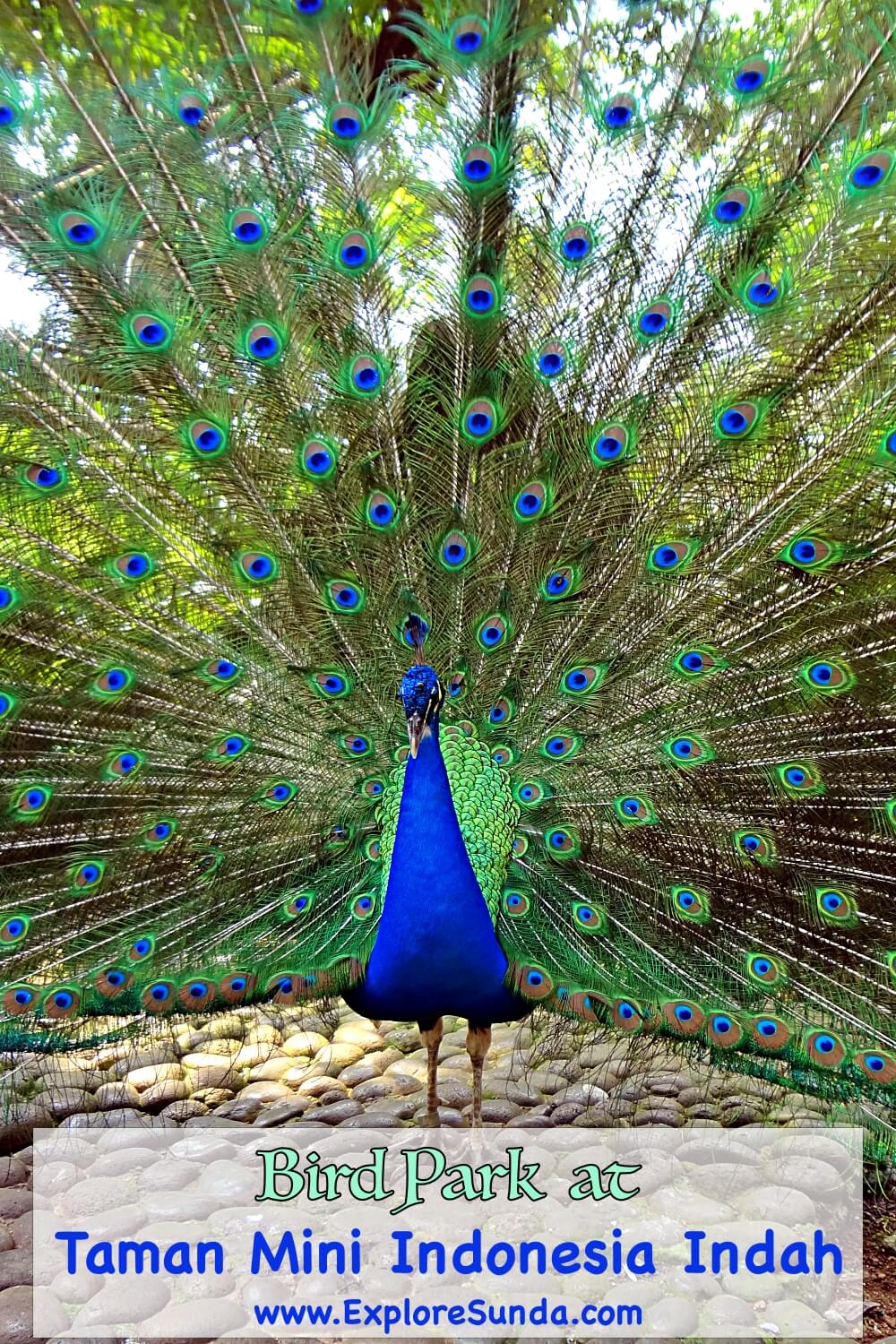 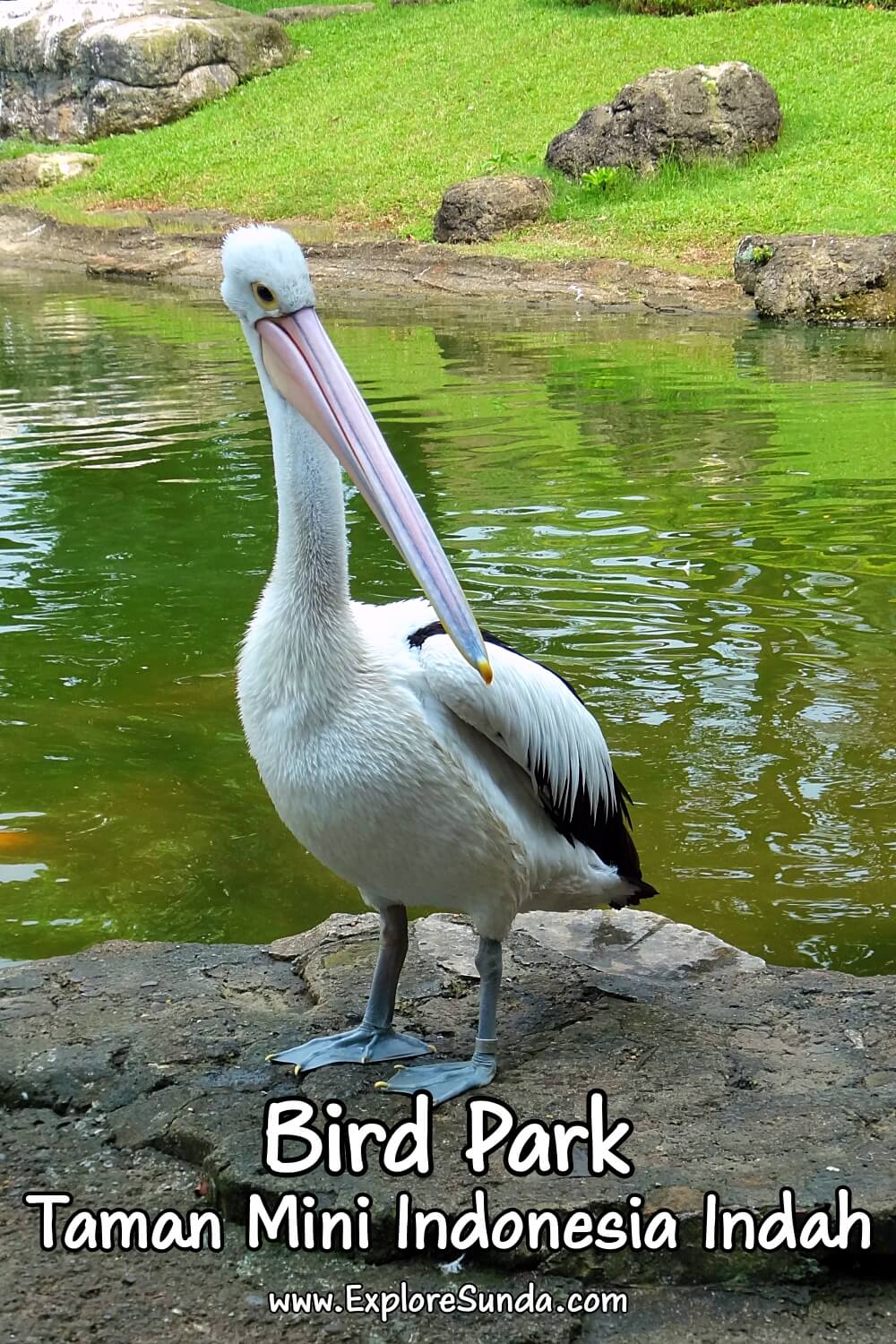 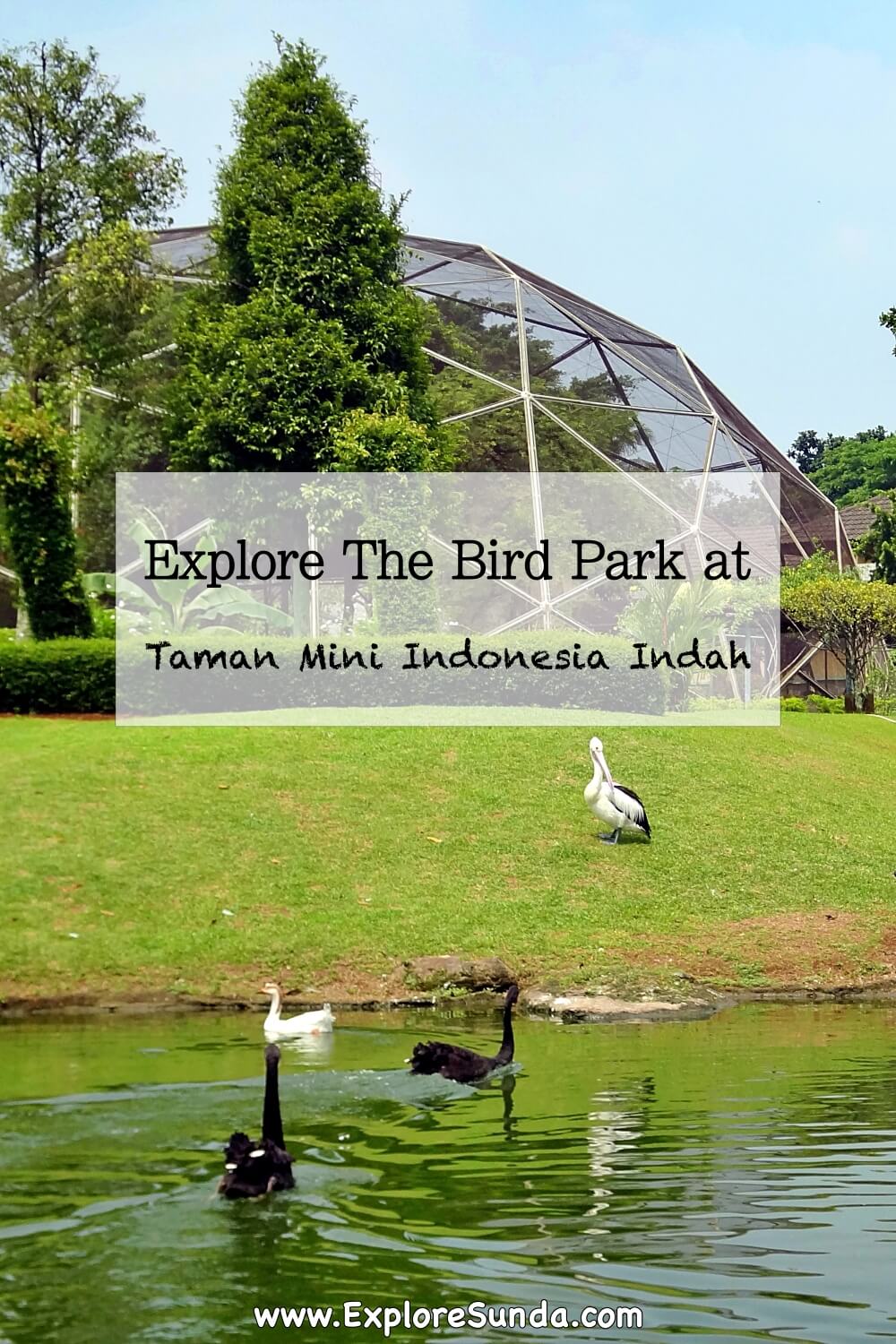 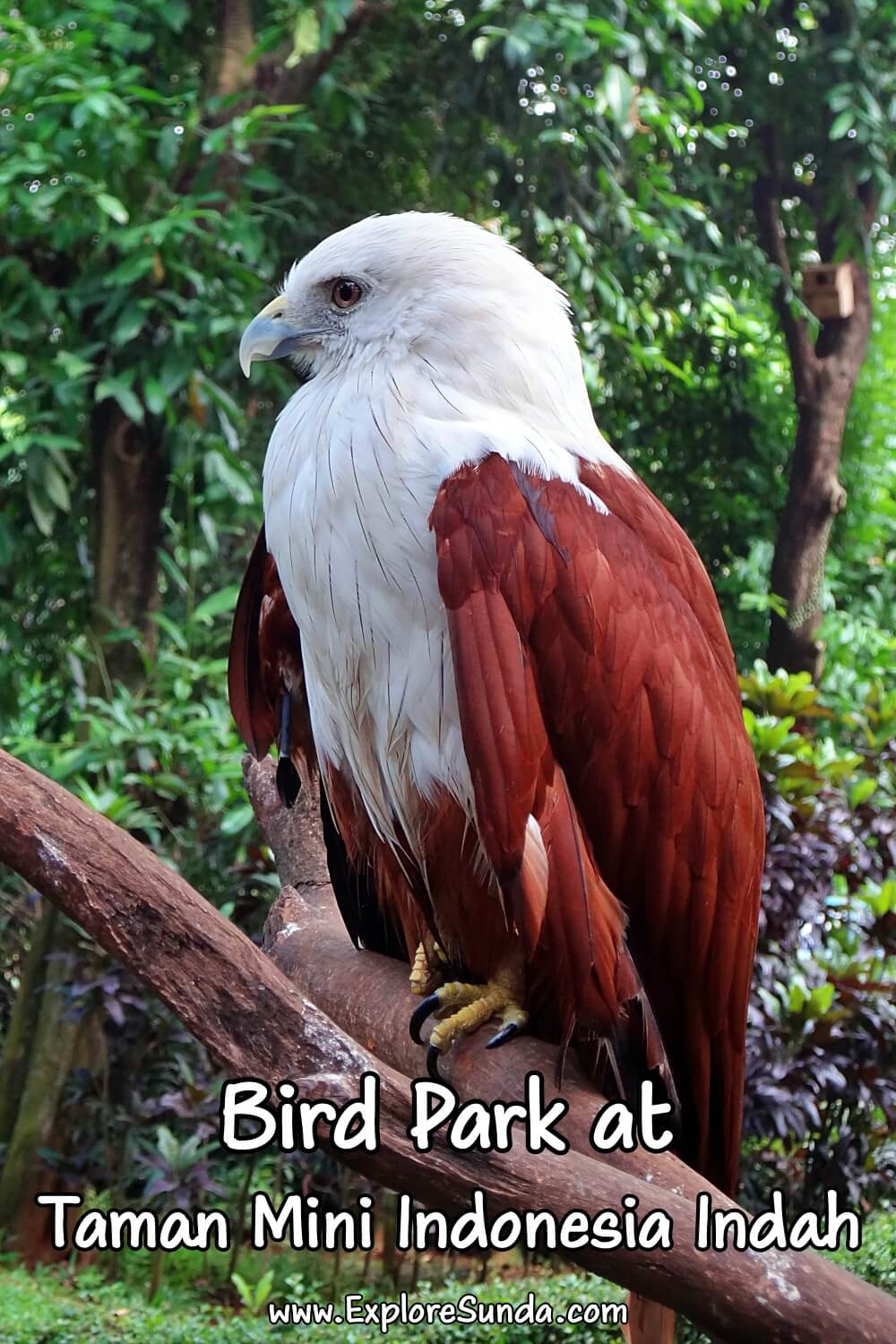 When you buy a ticket to the bird park in Taman Mini Indonesia Indah, you will also get access to Bekisar Park.

Bekisar is a type of rooster, a crossbreed between a green jungle fowl rooster (Gallus varius) and a domestic chicken (Gallus domestica). It has a beautiful voice. Thus, many people bring their bekisar for competitions.

Every year the Bekisar Park at Taman Mini Indonesia Indah held an annual Bekisar competition. The contestants come from all over Indonesia!

Supposedly, you can see many beautiful bekisar and learn how to raise them in this park. Sadly, there wasn't any pure breed bekisar, and the garden is a mess during my last visit in 2018.

Bekisar Park is also known as Dunia Ayam Nusantara. It means the place for various chickens from Indonesia. However, since the cages were broken, many chickens walked around freely between coops, and they crossbred among them. So, it is almost impossible to know the type of those chickens.