Among Putro SkyWorld Indonesia is one of the two planetariums in Jakarta. In addition to the digital planetarium, it also provides a lot of information regarding space, stars, the related technology, even the local legends from all over Indonesia.

In short, here are things that you should experience at Among Putro SkyWorld:

1. Peruse the Space Edu. You will be amazed by the abundant information about space displayed in this zone.

2. Take a seat and enjoy the digital planetarium. 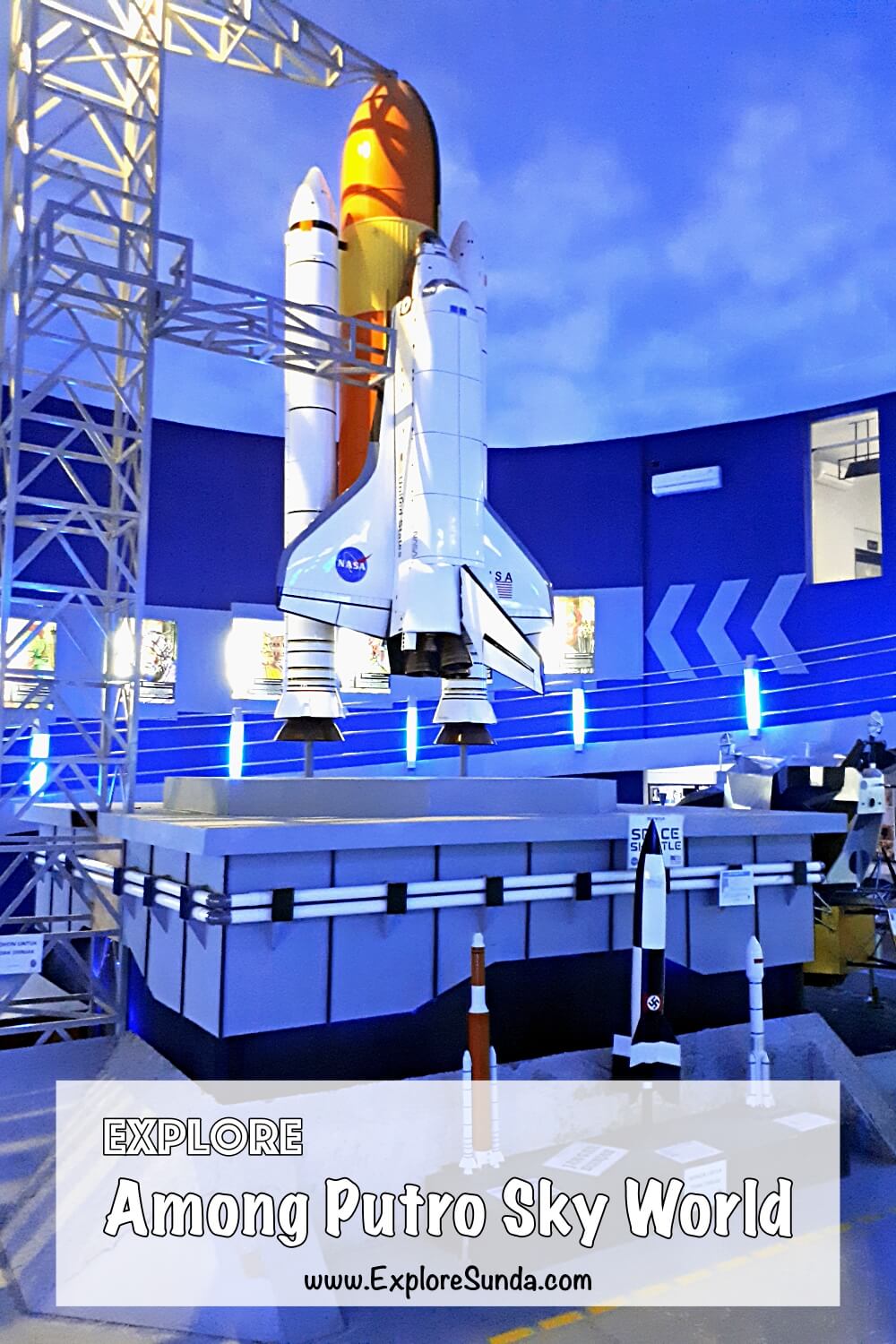 Have you ever wondered what is in the space? This section of Skyworld will show you what has been done over the years in the field of astronomy.

The first displays are folklores from all over Indonesia. It seems each region has its own interpretation of who lives in the space. For example:

Next is the display of Archeoastronomy. It is the mix of archaeology and astronomy, how people all over the world create structures in relation to the space. For example, the famous Stonehenge in England, Choco Canyon in New Mexico, Chichen Itza in Mexico, Great Pyramid in Egypt, Machu Picchu in Peru, Apollo Patraos temple in Greek, Virupaksha temple in India, and Cheomseongdae in Korea. Sukuh temple in Central Java is an example from Indonesia. Its truncated pyramid shape is similar to the structures in Central and South America. People reported they see a beam of light radiated from this temple to the sky. This phenomenon is still a mystery.

Walking further inside the Skyworld, you will find the modern astronomy. One of the eye catching display is the star map, which mapping 2,844 stars, plus nebulae and star clusters that can be seen by the unaided eye. 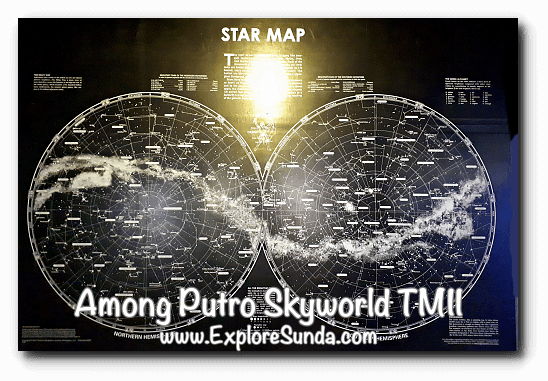 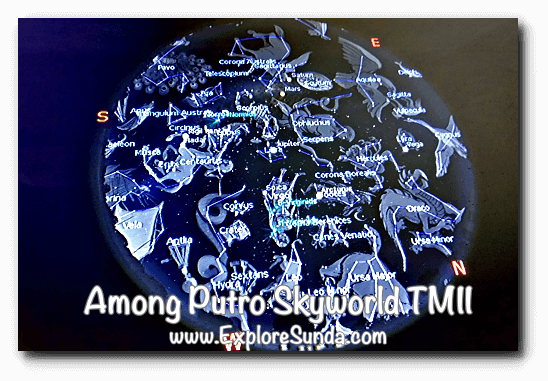 The modern astronomy has many more explanations. It has explanations of lunar and solar eclipses, the black hole, the worm hole and supernova (the end of a star) phenomenons. One of the monitor shows how people connected a group of stars to form a shape and create a constellation. You also can see the display of a meteorite, telescopes and many more. 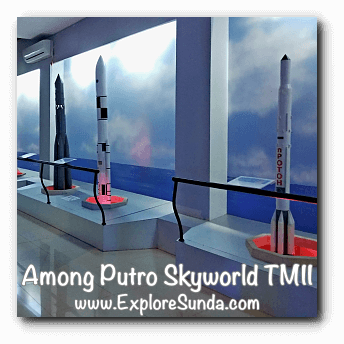 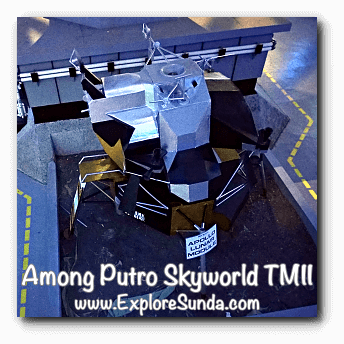 There is a replica of a space shuttle, complete with its control room in the center. Plus, there are several short recordings of the communication in the control room, so you can play pretend to launch a spaceship! 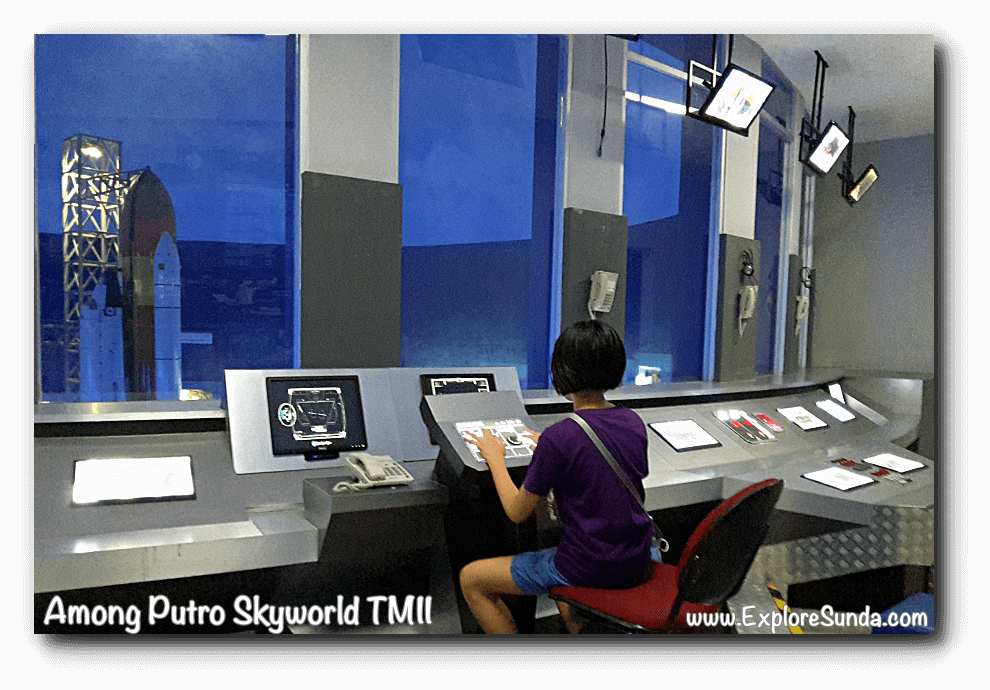 On the way down you will pass a wall full with posters of the great astronomers of all time.

However, most of the information here is in bahasa Indonesia.

The digital planetarium of Skyworld Taman Mini Indonesia Indah is located behind the main building. It looks like a round cinema. They use cinema seats, but the screen looks like a dome. First, the host will explain about the sky at current time, then he will show us what it looks like in the morning. After that, a short movie about our solar system (the sun and its planets) plays. All explanations are in bahasa Indonesia. I'm not sure why but the images were reflected poorly on the screen, they are blur all the time. I really hope Skyworld will fix that soon. Anyway, the show time in this digital planetarium are several times a day, each approximately 30 minutes, so don't miss it.

Next to the digital planetarium are two small rooms, each has several seats complete with seatbelts. That's the 5D cinema of Among Putro Skyworld. A short movie is played here, approximately 5 minutes only, but it's full of motions. It feels like you jump, fly, glide, etc. Although in reality, you only sit, put the seatbelt on, and wear special glasses for 3D, then your seat will move accordingly. It's really fun!

The saying of "the more is merrier" is definitely works for this game. The participants will be divided into 2 groups and you will wear a special vest equipped with a laser gun. Each team has different lights on the vest: blue or green. Each person has to shoot his/her enemies from the opposite team on the lights of their vest. Once he/she was hit, his/her lights will be off for a couple seconds. When their lights on again, they can shoot or be shot again.

This game is played in the dark room, with lots of room dividers to hide from enemies. Hence, the lights on your vest are very visible.

One ticket is valid for one period of 15 minutes. When you keep running and ducking in a dark and warm room, 15 minutes seem a long time to win ;-)

At the end of the game, the result will be displayed on the tv in the lobby. Then you can brag your skills :) 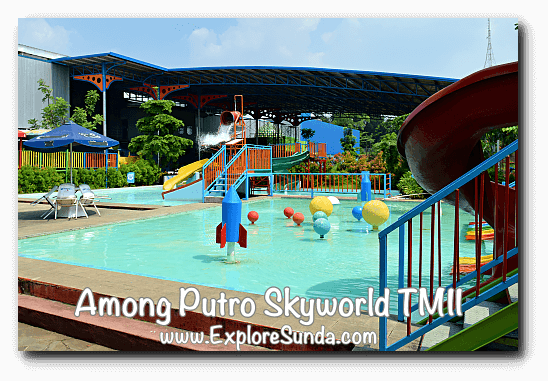 Although it's not related to space and astronomy, Among Putro Skyworld has a waterpark, a small playground, a wall climbing and a trampoline. They are already included in the entrance ticket.

Among Putro Skyworld is only one facility in Taman Mini Indonesia Indah (TMII). There are many more to be explored in TMII. Among them are the museums, traditional houses, science centers, bird parks, and Snowbay Waterpark.