Nini Anteh Lives on The Moon
A Sundanese Folklore

Nini Anteh is Sundanese folklore that used to be told when families gathering in the yard to enjoy the full moon. Since it is verbally told, there are so many different versions of this legend.

Not long ago, when tv and gadget didn't fill in people's nights, people love to stay outside to enjoy the moonbeam. Children play in the yard, and at times like that, the elder told the story of Nini Anteh.

Nini is a Sundanese word for grandma or an old lady. Anteh derives from a Sundanese word 'kanteh' (noun) or 'nganteh' (verb), which means yarn or the act of spinning cotton into yarn for weaving. She was called Nini Anteh because when you look up to the full moon, you will see some darker spots that look like an old lady is weaving accompanied by her cat. It was a three-color cat named Candramawat.

Then the story continues to how she got there in the first place. Surprisingly, there are many different versions, which I don't know which one is the original story. So, here's three versions I have found:

Once upon a time, the kingdom of Pakuan ruled the land of Sunda. The king and queen were wise. They had one beautiful and kind daughter: Princess Endahwarni.

The princess was always accompanied by her lady-in-waiting: Anteh. Anteh's mother was a lady-in-waiting too, but she passed away giving birth to Anteh. The princess and Anteh grew up together. They were inseparable and were like sisters.

One day the king and queen told Princess Endahwarni that before she inherited the kingdom, she had to wed Prince Anantakusuma, a young, strapping, and handsome prince from Kadipaten Wetan. The queen specifically asked Anteh to accompany and prepare the princess for her upcoming wedding.

As usual, every morning Anteh went to the palace garden to pick up jasmine for the princess. She sang happily while picking up the flowers. Prince Anantakusuma happened to pass by and hear her beautiful voice.  He jumped the high wall of the garden palace to seek the singer. When he saw Anteh, he instantly fell in love with her. He wished Anteh was Princess Endahwarni. 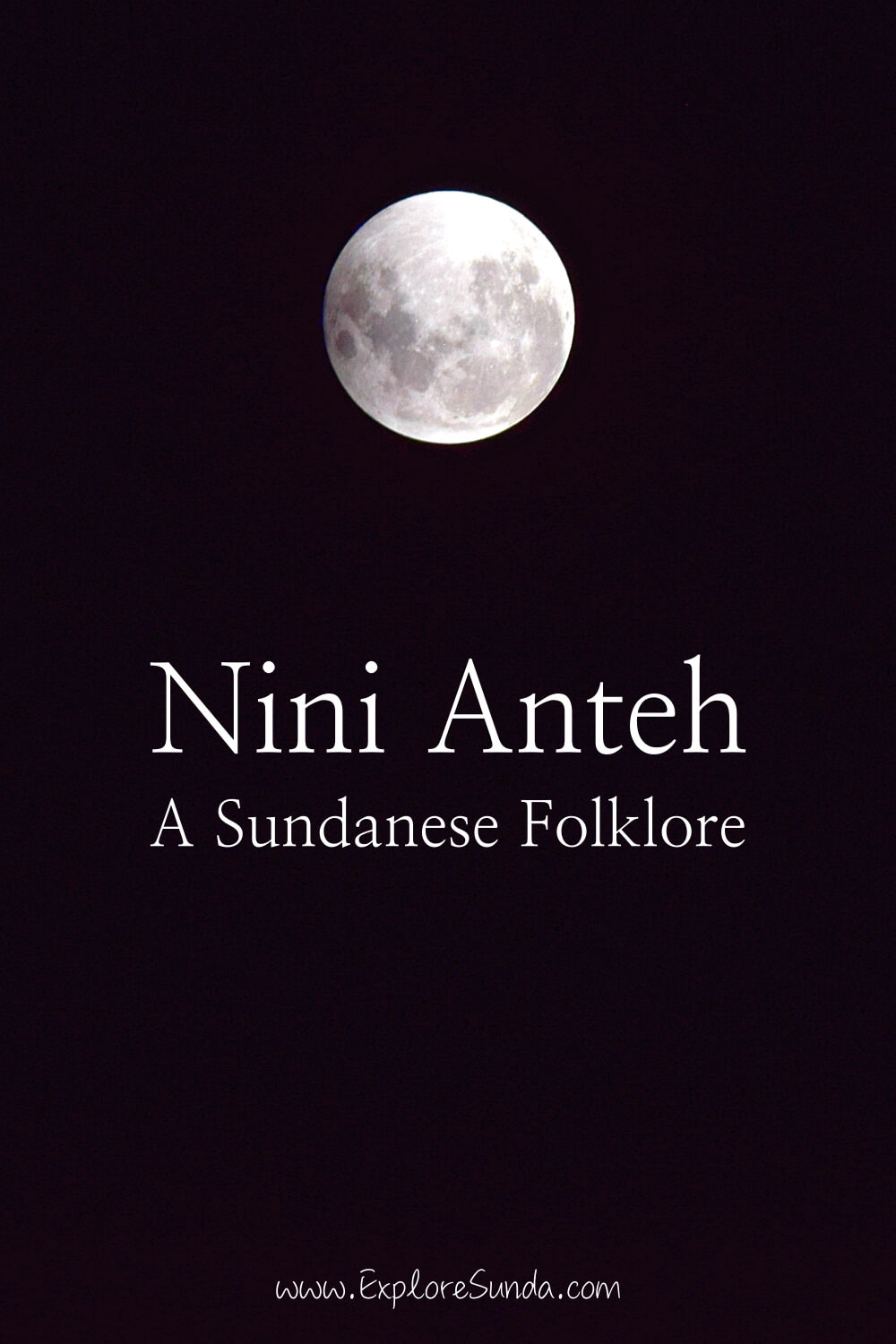 Finally, the day when Prince Anantakusuma officially betrothed to Princess Endahwarni came. They had a big party with lots of delicious dishes. Anteh was one of the ladies-in-waiting that delivered those dishes. The princess was jealous of the way Prince Anantakusuma stared at Anteh. Hence, she ordered Anteh to leave the palace.

Anteh loved the princess so much. She didn't want to cause any trouble for the princess. Thus, she immediately left the palace. Having no place to go, she decided to visit her mother's village. She met her uncle there, so she decided to stay. She worked as a seamstress and then got married. Years later, she became a famous seamstress.

One day, a royal carriage stopped in front of Anteh's home. It turned out Princess Endahwarni regretted her wrongdoing and sought Anteh ever since. The princess asked Anteh and her family to return to the palace and became the palace seamstress.

Anteh didn't have the heart to refuse the princess. Hence, she brought her family to move into the palace. The princess gave her a house at one corner of the palace garden.

It turned out that Prince Anantakusuma was still fond of Anteh. He couldn't keep her out of his mind. So, one night he strolled in the garden in the hope of seeing her. He found her in there playing with her cat, Candramawat. He couldn't help himself to declare his love to Anteh.

Anteh tried all her might to deflect the prince, but he insisted that he only wanted Anteh. Frightened, she ran away while carrying her cat. She prayed to the Almighty to help her. Suddenly, the moonbeam pulled her to the moon so he couldn't catch her.

Since that night, Anteh lived on the moon with her cat. Many years went by, and she became an old lady. Still, she couldn't return to the earth because she's afraid of Prince Anantakusuma. So, whenever people looked at the full moon, they would see Nini Anteh and her cat. 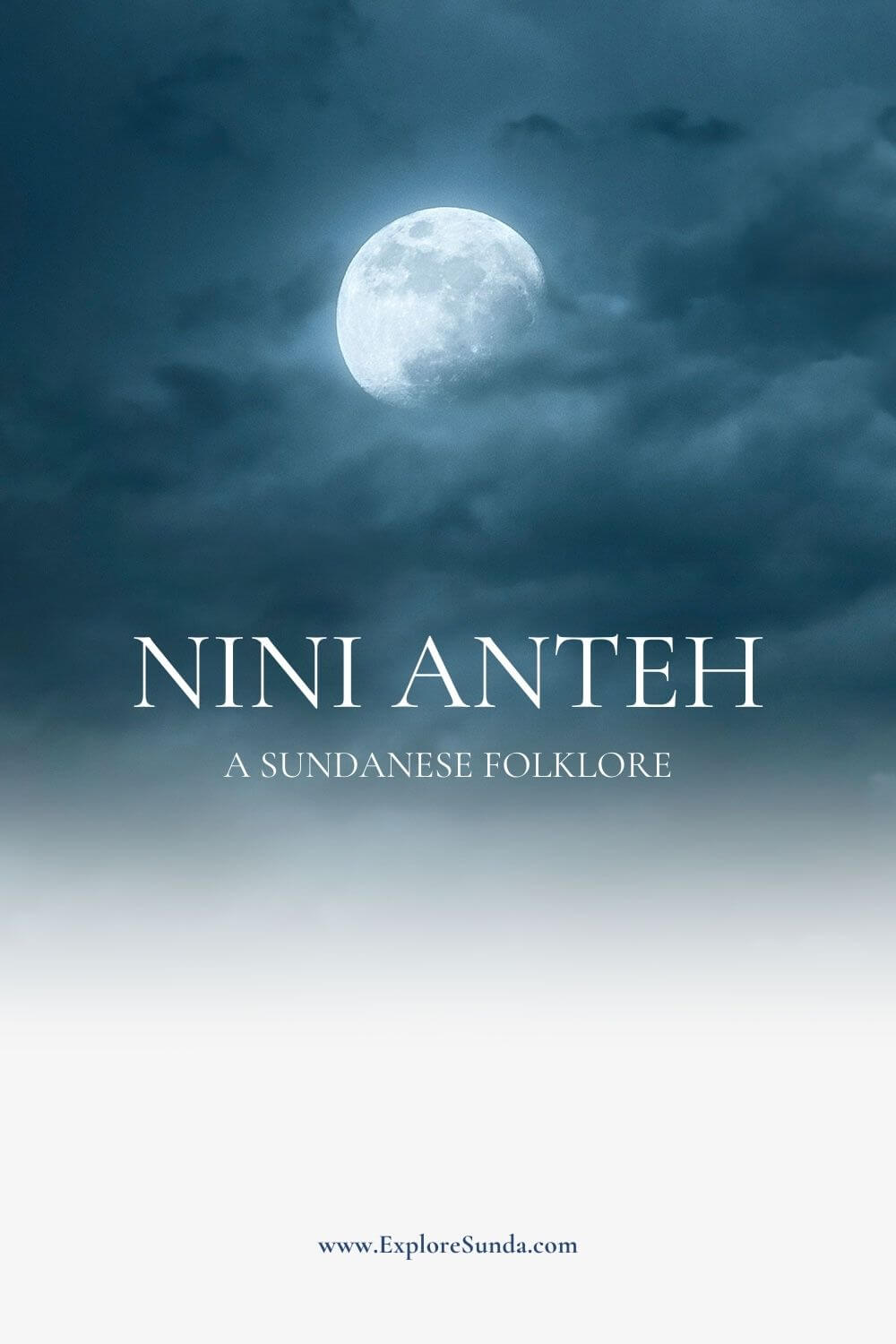 In 1912, C.M Pleyte, a Dutch author, published a book titled “De Inlandsche Nijverheid West Java Sociaal-ethnologisch Verschijnsel”. One of the stories in this book is Nini Anteh that was written both in Sundanese and Dutch. Here's how the story goes:

Once upon a time, there was a hunter who lived with his cat. One day, the cat accidentally drank the hunter's seed and ended up carrying his daughter. The hunter loved his daughter and the cat very much.

Seven years later, the hunter got married. Unfortunately, his wife didn't like the girl. She let her starved and neglected her. The girl felt so hungry that she and her cat went to a river and found a fruit tree. There were so many fruits hanging on the tree that the girl and her cat happily climbed the tree and ate them.

When the hunter returned home, he couldn't find his daughter. He searched everywhere until he reached the river. There he found his daughter and her cat already high on the tree. When the girl sang, the tree magically grew taller and taller until it reached the sky.

The hunter tried to catch up and coax them to return home, but suddenly there was a golden ladder connecting the girl to the moon. She continued her journey to the moon and left her father on the tree.

The hunter was dejected. It was too high to return to the ground, but he couldn't follow his daughter because the ladder had disappeared. Eventually, he died on that tree.

The girl and the cat were taken care of by the moon goddess. She had a job to spin cotton into yarn and weave them, but it was a never-ending work until she became very old. The Sundanese word for weaving is nganteh, so when the girl got older and became an old lady, she was called Nini Anteh.

Once upon a time, there was an old couple called Nini Anteh and her husband Aki Balangantrang. They had married for a long time but didn't have any children. Hence, they adopted a three-colored cat. They named it Candramawat.

Nini Anteh loved to weave, especially at night, under the moonbeam. Her devoted husband and cat always accompanied her.

One night, when Nini Anteh took a break from her weaving, she looked up to the moon and mentioned her wish to her husband. She wished they could live on the moon that she loved so much. Hearing that, Aki Balangantrang encouraged her to act on her wish. They were both known to have a high skill of saepi (a mind skill, something like teleportation skill). That's how Nini Anteh, Aki Balangantrang, and her cat Candramawat lived on the moon.

Another version of this story said that only Nini Anteh and her cat went to the moon. She kept weaving there and always sent the finished fabric to her husband, who lived on earth. 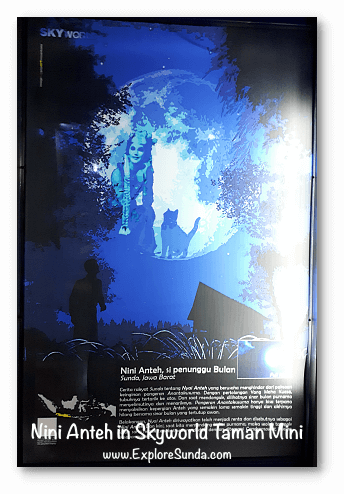 Since the story of Nini Anteh is related to the space and galaxy, you can find Nini Anteh and other related folklores from Indonesia in Among Putro SkyWorld Indonesia at Taman Mini Indonesia Indah.