The Oil and Gas Museum
in Taman Mini Indonesia Indah

The official name of the Oil and Gas Museum in Taman Mini Indonesia Indah is Graha Widya Patra (GAWITRA in short). Graha means a building (in this case, a museum). Widya from the Sanskrit language, which means knowledge. Patra means oil. Hence, this museum is also known as Museum Minyak dan Gas Bumi.

In essence, this Oil and Gas Museum showcases the history and present-day impacts of oil and gas on the development of Indonesia. This museum opened on April 20, 1989. Then, starting on June 11, 2018, it was temporarily closed for renovation. As of this writing on April 2021, the museum hasn't reopened yet.

My last visit to the Oil and Gas Museum in Taman Mini was in April 2018, a couple of months before it closed its doors to visitors. Here is a brief overview of the museum; while we are waiting for a new renovated Oil and Gas Museum :) 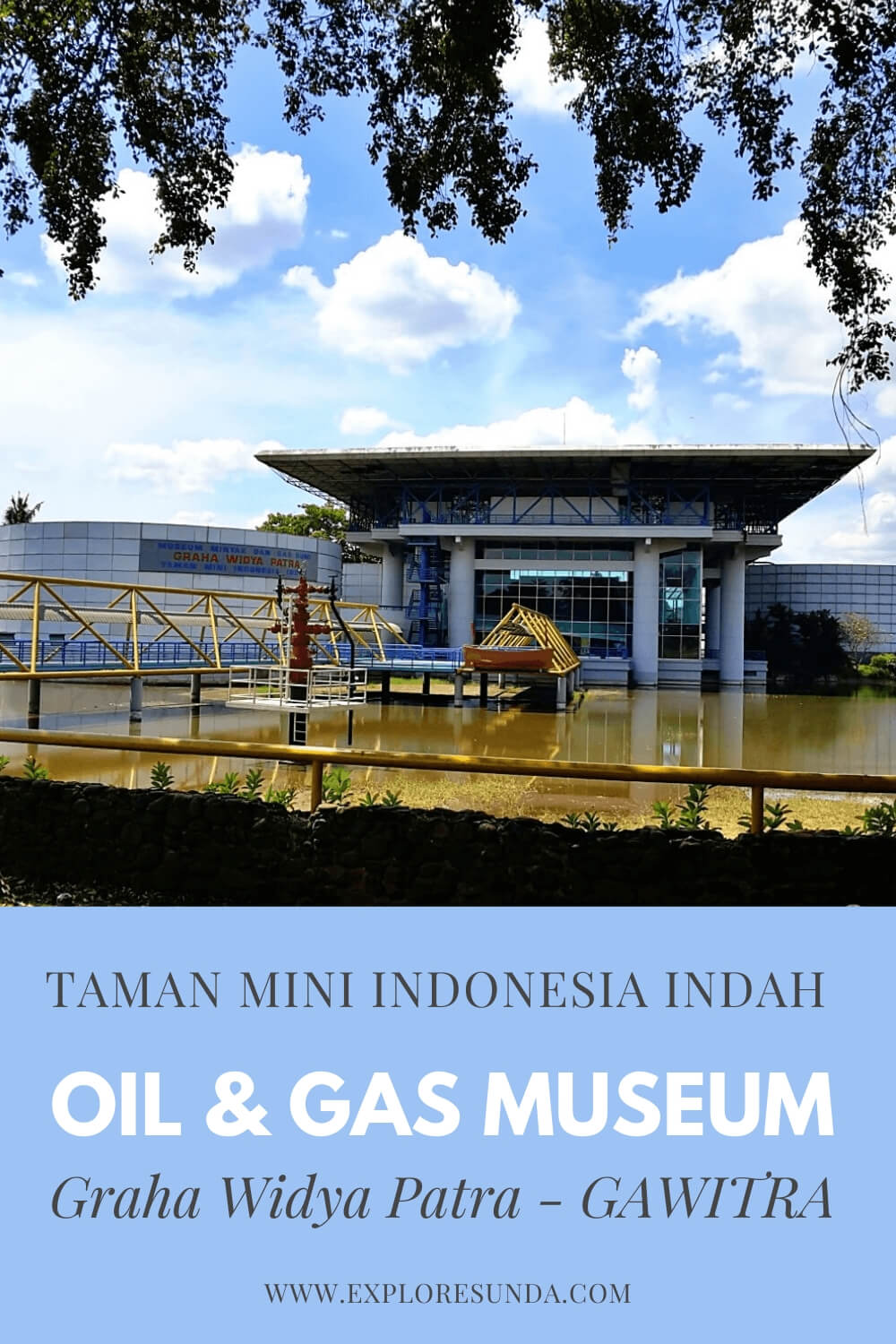 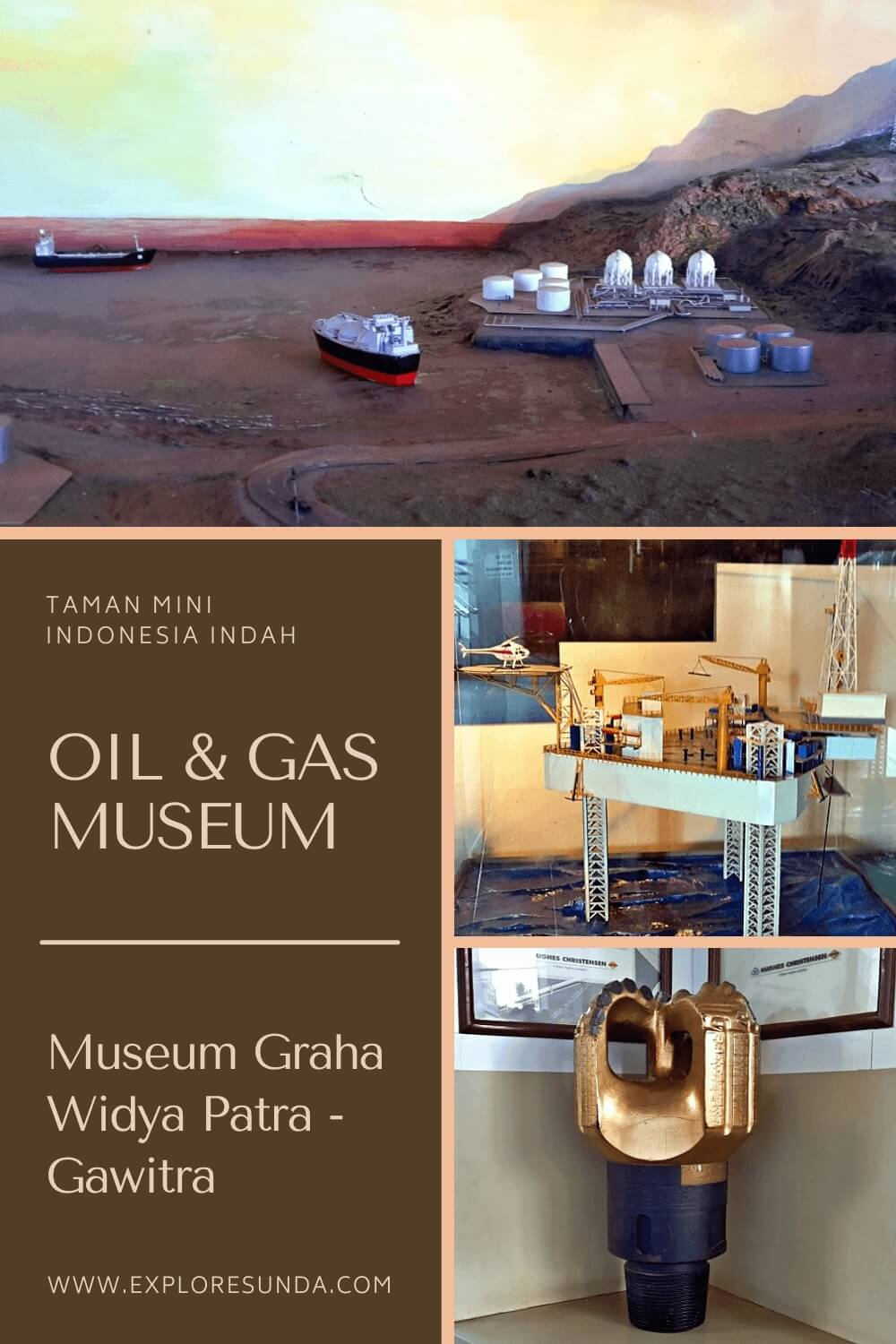 The Oil and Gas Museum is in the middle of a human-made lake. The museum looks like an offshore rig with two oil storage tanks, one on each side. If you look closely, you will see that the exhibits start from this lake! Some of the outdoor displays are an oil drill tower (a derrick) and a pumpjack.

You have to pass a long bridge to reach the door of the museum. Upon entering the Oil and Gas Museum, there are several sections you can explore. First is the history of oil and gas exploration in Indonesia.

The history of the oil exploration in Indonesia started when Aeilko Jans Ziljker, a Dutch planter in Sumatera, found greasy mudholes near his plantation. So, he established De Voorloopige Soematra Petroleum Maatschappij in 1883. He soon began drilling and found high-quality oil in 1885. Hence, the year 1885 became the starting year of the Oil and Gas Industry in Indonesia.

However, it was Jan Reering who first attempted to drill oil in Cirebon, Indonesia. He started oil drilling in December 1871. Unfortunately, he had to stop on July 31, 1876, due to insufficient tools, and he didn't found much oil there.

Besides posters, you will see several dioramas depicting the history of oil discoveries. The dioramas started from the dinosaur era! You will see many miniatures too, such as various kinds of oil tankers and offshore rigs.

I bet not many people have seen the actual tools and equipment used in the oil industry. Here, you will see them, albeit the used ones. One eye-catching exhibit here is a diamond drill chisel. It is a 12.25-inch diamond drill chisel from the oil rig in the Natuna sea. Another exhibit is the ruptured casings (the ruptures are due to a gas blowout in Subang).

One noteworthy exhibit in this Oil and Gas Museum is the Oil Tree. You will hardly miss it since the tree is glowing in the middle of the museum. Each branch on this tree shows the many products made from oil. The most obvious ones are asphalt and various types of gasoline, diesel, and jet fuel. But, do you know that we use crude oil to produce cosmetics and nylon fabric? 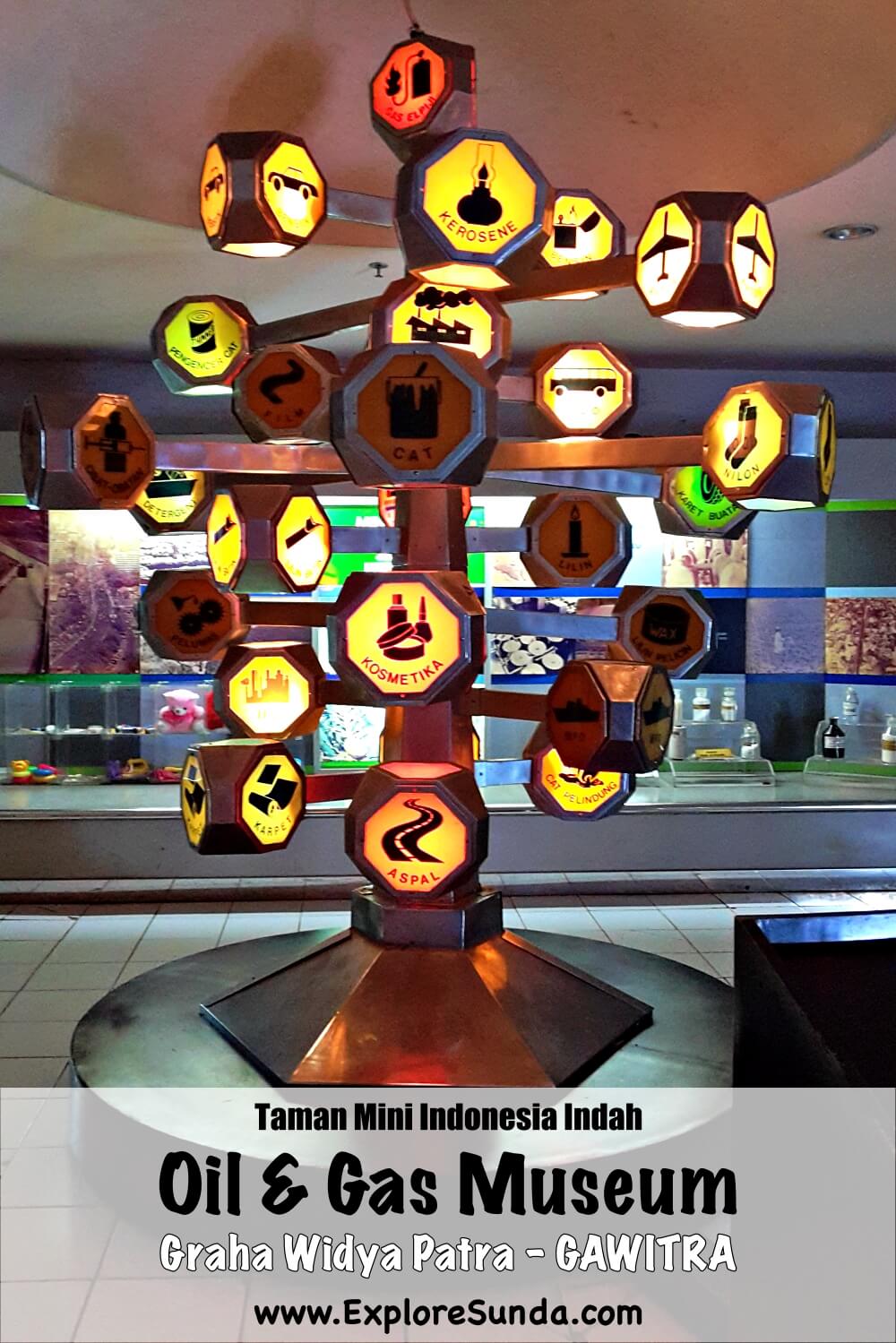 Although the Oil and Gas Museum is temporarily closed, there are still many things to see and do in Taman Mini Indonesia Indah. You can stroll in the many parks and gardens, see the traditional houses up close, take some thrilling rides, or go to cinemas and theaters.