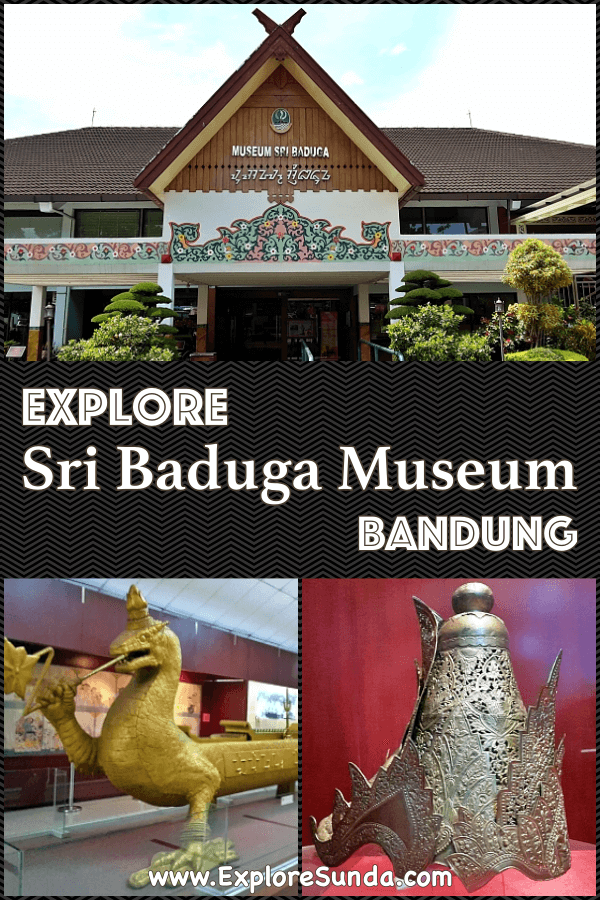 Sri Baduga Museum is the state museum in Bandung. Its collections has reached 6,923 pieces, starting from the prehistoric era through Hindu and Buddhist kingdoms until present, rich with Sundanese culture.

Let's start with the name of the museum. Sri Baduga was derived from the great king of Pajajaran kingdom in Sunda: Sri Baduga Maharaja Ratu Haji di Pakuan Pajajaran Sri Sang Ratu Dewata. He was mentioned in Batu Tulis inscription, which was made twelve years after his demise. He brought the kingdom to prosperity and greatness, hence, during his reign Sunda reached its golden age.  He became legend known as Prabu Siliwangi. Since the museum showcase the history of Sunda, the name is a perfect match. 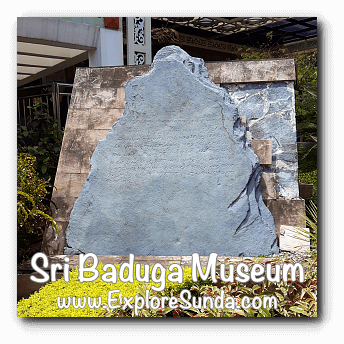 Batu Tulis Inscription was found in Batu Tulis Village, Bogor. King Surawisesa had made the inscription in memoriam of his father, the late Sri Baduga Maharaja. 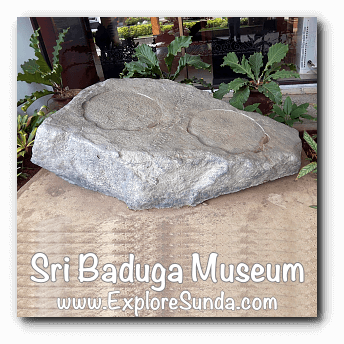 Tapak Gajah Inscription was found in Muara Hilir Village, Bogor stating they are a pair of elephant's print belong to Airawata, the elephant that leads Great Taruma into glory. 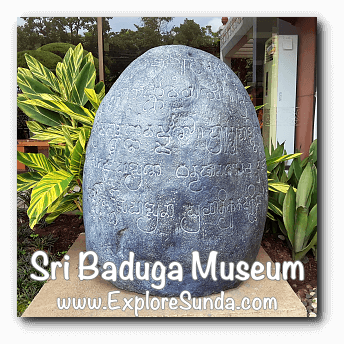 Tugu Inscription was found in Tugu, Jakarta. It mentioned King Purnawarman had dug the river of Chandrabhaga to flow the water to sea and Gomati river in 21 days. 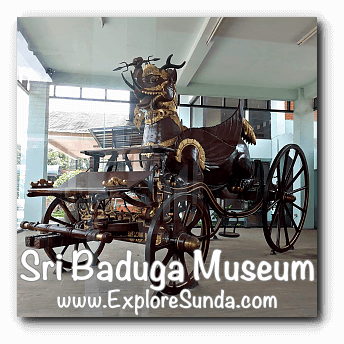 The exhibits in Sri Baduga Museum starts from the front yard. There are several replicas of stone inscriptions decorated the lawn, but the most prominent display is a horse-drawn carriage called Paksinagaliman from Kanoman Sultanate of Cirebon. It lays inside a glass walled room. It was built on 1608 AD. Initially it was a jampana (a palanquin) for royal family, but later on they added four wheels so it can be pulled by horses.

As the name implies, Paksinagaliman is a combination of three animals: 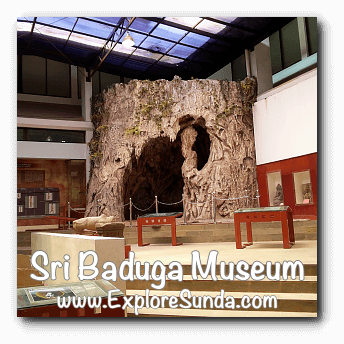 As soon as we step inside the Sri Baduga Museum, we will see a large and bright room, where the centerpiece lays. It is the replica of Pawon cave, where Pawon man was found. Pawon men were Homo sapiens of Mongoloid race. They were estimated to live around 5,600-9,500 years ago and their remains were found in Pawon cave, a cave in Masigit mountain, west of Bandung. The archaeologists found five remains of Pawon men buried in the same hole along with stone and bones artifacts.

There are many other archaeological sites all over West Java. For example Gunung Padang site, Cipari archaeological site in Kuningan, and Tugu Gede site in Cisaat Sukabumi. The pictures of these sites decorate the upper wall of this room. The remaining of this room displays the artifacts found in those sites. 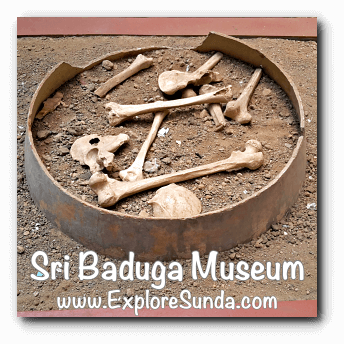 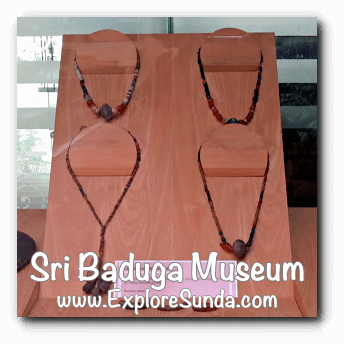 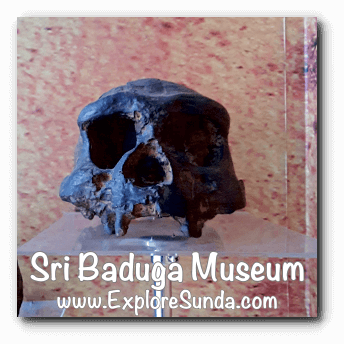 Next room provides information from the geological angles, the rock formations and layers that shape West Java. Of course, Geology Museum has much more detail information on this subject.

At the end of the room there is a display cabinet showcasing the fauna native to West Java.

Then we continue our exploration to the Hindu and Buddhist periods. One of the archaeological findings is Jiwa temple in Batu Jaya compound in Karawang. This Buddhist temple dated around fourth century, which means it is the oldest temple in Indonesia. 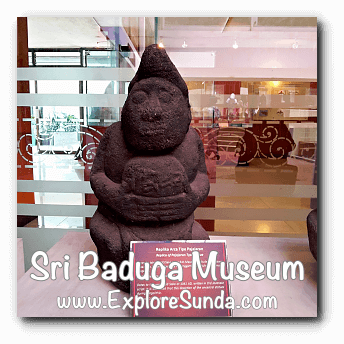 Replica of Pajajaran type statue, from Cikapundung, Bandung. The statue is a depiction of the ancestor during Megalithic period. 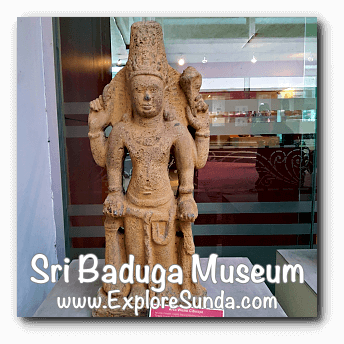 Wisnu Cibuaya statue was found in Karawang. The statue has four hands, each holds an object and wears a bracelet. 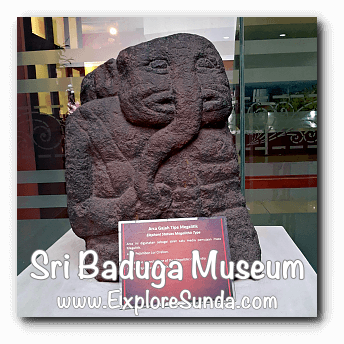 Elephant statue from Megalithic period was found in Pejambon Lor Cirebon. The statue is used as a media in a Megalithic cult.

Walking up through a series of steps, we arrived at the next section of the Sri Baduga museum: the culture of Sundanese people.

There are ancient manuscripts, miniature of local houses with various types of the roof, antique furniture used by people during Dutch colonization, and clothes as well as traditional wedding costumes. 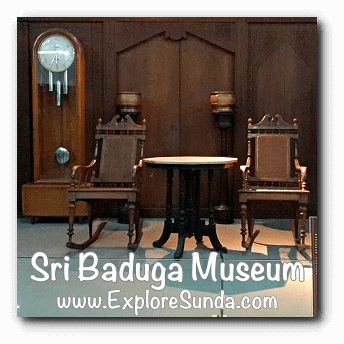 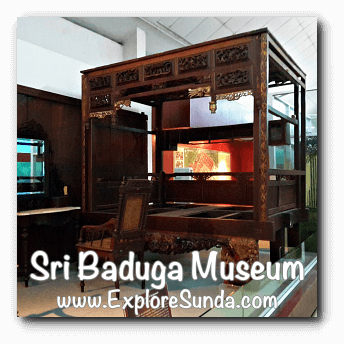 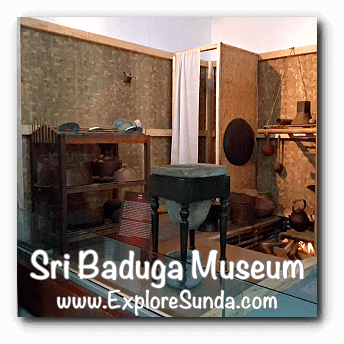 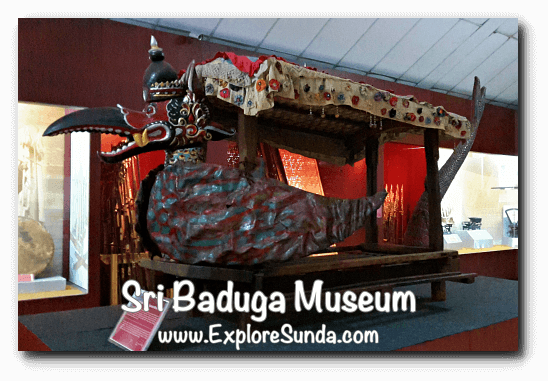 The museum also displays Jampana (Tandu Garuda Mina) a palanquin for bride and groom from Cirebon. This Jampana has a head of Garuda (the mythical bird from Hindu beliefs, representing power), a body of serpent or dragon (representing fertility), a pair of wings in the front and serpent/dragon tail sticking up in the back. 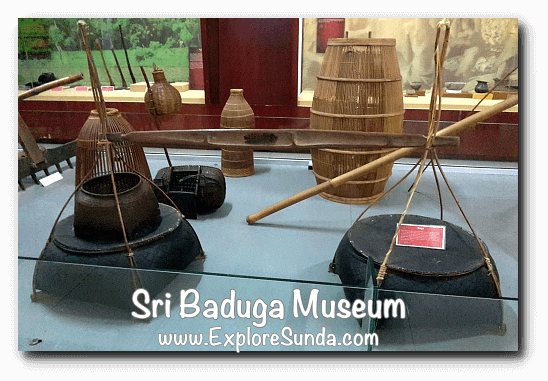 Traditional fishing equipment as well as the fish carry-on containers made of bamboo. 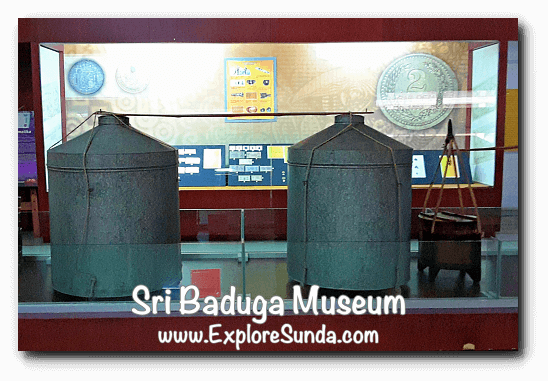 Two large drums of traditional chips container. The numismatic collection is in the background.

Then we continue to the items used in daily life such as tools used for processing the paddy into rice, fishing, and food carts. The museum also has many types of weighing scales, but don't expect to find the digital ones :) 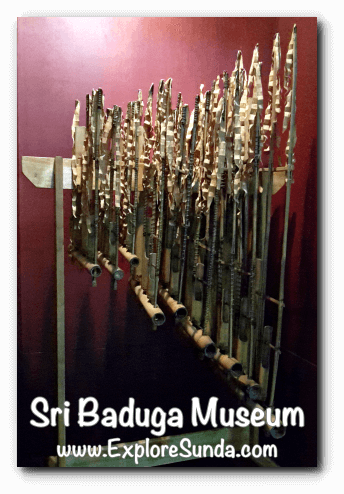 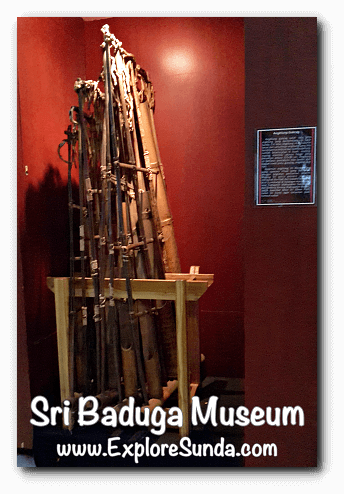 Angklung Gubrag from Sukabumi. It comprises 6 angklung in a set. The size is bigger than other type of angklung (between 215-90 cm) 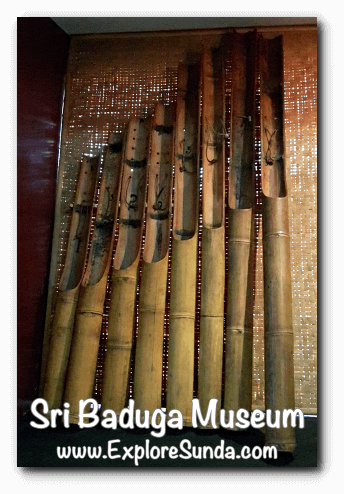 Calung Bumbung from Tangerang is the king of calung due to its largest size. Calung is played by hitting the instrument with a stick.

Other musical instruments are also displayed in this area. The largest one is Kacapi Maung Nagara. Kacapi in Sundanese word or kecapi in Bahasa Indonesia is a type of horizontal harp, which is played by plucking the strings with the fingers. 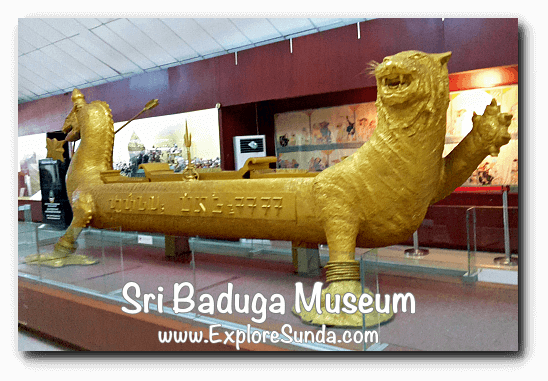 Walking further in this room we will see a set of wayang golek. Wayang golek originates from the land of Sunda. It has a 3D form, so it looks more like a puppet than wayang kulit (shadow puppet). However, any wayang performance will never be completed without the music accompanying it, that's why a set of gamelan displayed beside the puppets. 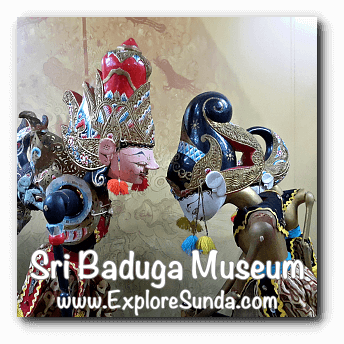 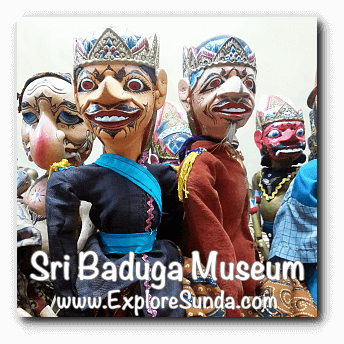 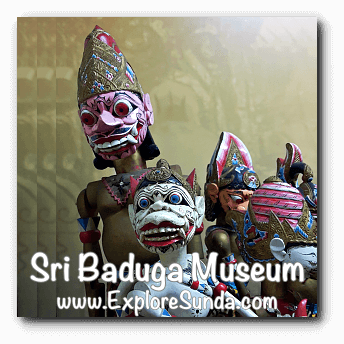 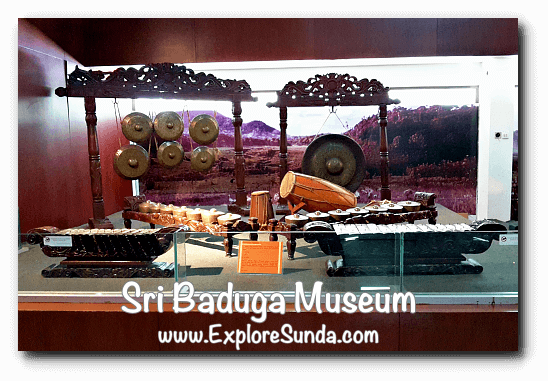 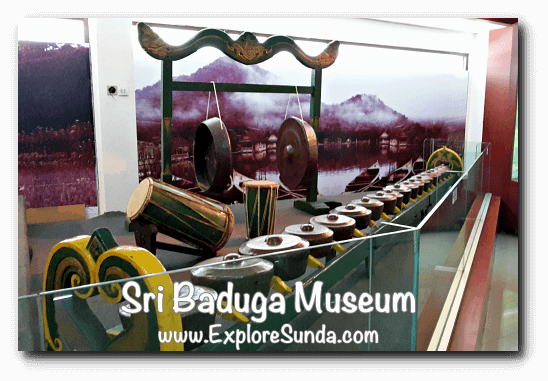 In one corner of this floor we saw a vault type of door. Although the door is opened, the metal bars preventing us to enter the room. Inside is a room for the master pieces. The collections here are made of gold, a very rare items, delicate china from overseas, glass painting, and woven fabrics from all over Indonesia. Sadly, we could not see them since there was no staff around and there was not any information how we can accessed it.

Now you can imagine what a treasure Sri Baduga Museum is. Unfortunately, how the museum lays out the exhibits and the poor lighting make it less desirable for us to explore in leisure pace. I really hope they will upgrade the facilities, so a visit to Sri Baduga Museum becomes a very memorable one.

The museum has spacious parking lot, the only problem you may encounter is finding the entrance gate especially in this always busy street.

Closed on Mondays and Public Holidays

Spending an hour or two exploring Sri Baduga Museum is surely a fun and educative way to spend your holiday in Bandung. But, having fun in the outdoor in the highland surrounding Bandung would double the fun. What do you think of these places?