The Airport Train from Soekarno Hatta International Airport to Jakarta

Since early 2018, Jakarta has an airport train. Get all the information on the train stations, how much the ticket cost, and how to buy it here.

Soekarno Hatta International Airport is the official name of the largest and busiest international airport in Indonesia.

Since Cengkareng airport is approximately 28 kilometers east of Jakarta, the most common way to travel from Jakarta to Soetta airport and vice versa is through a toll road. The non-toll-road connects the airport to Tangerang. The traffic on the airport toll road is usually heavy unless you travel in the ungodly hours.

Alternatively, use the Jakarta airport train (KAI Bandara in Bahasa Indonesia)! This airport train is a new way to travel between Soetta airport and the city of Jakarta. It stops at five train stations. It starts at Soekarno Hatta International Airport, with quick stops at Batu Ceper, Duri, and BNI City train stations before it ends at Manggarai train station. It takes only one hour from the airport to Manggarai. Plus, you may carry 20 kg luggage with a maximum size of 150x60cm. 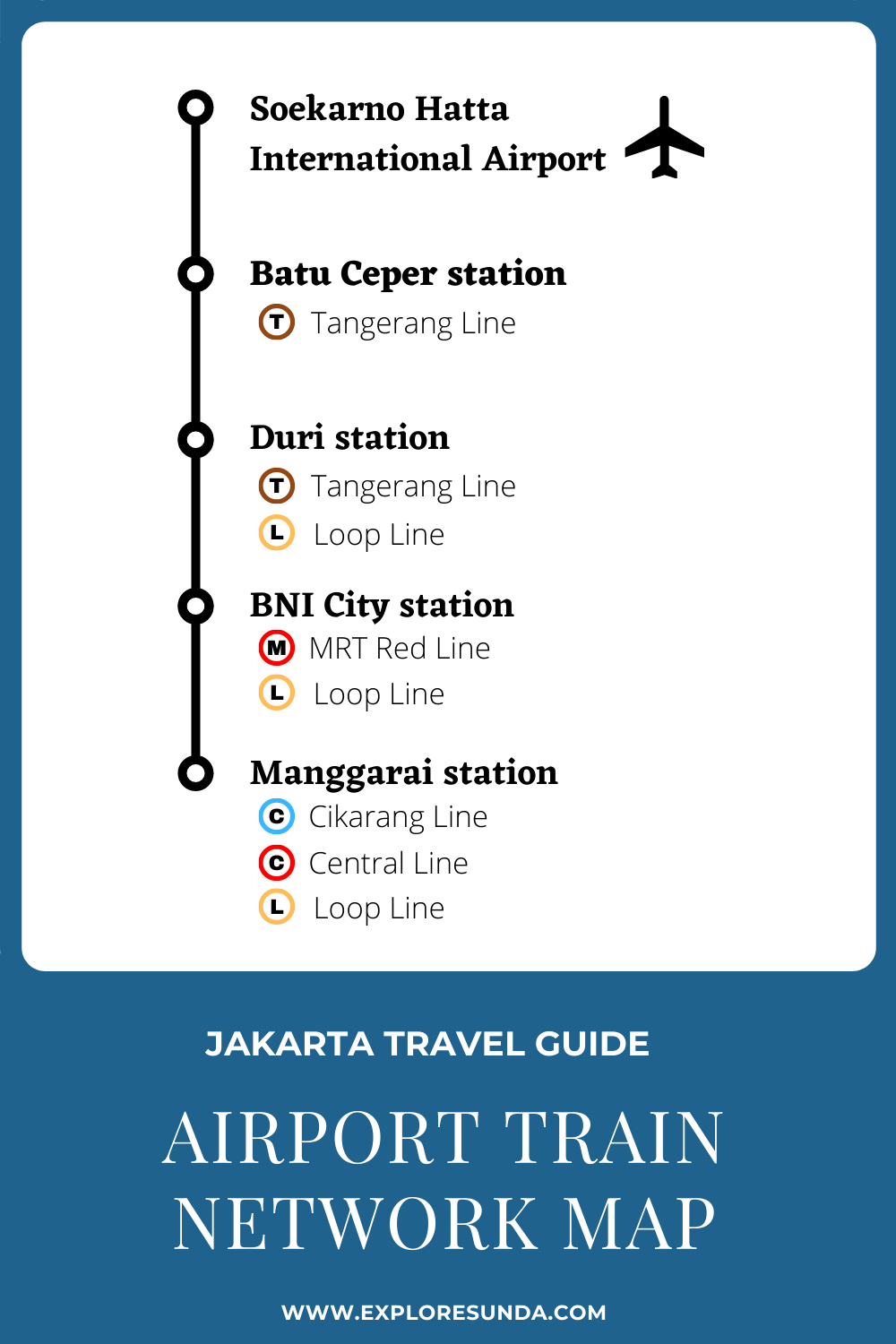 According to the 2021 timetable released by railink.co.id (the official website of KAI Bandara), the Jakarta airport train is scheduled to make 40 trips daily, 20 trips for each direction. If you intend to catch a plane, make sure you choose the train that will arrive at the airport two hours before your plane departure. 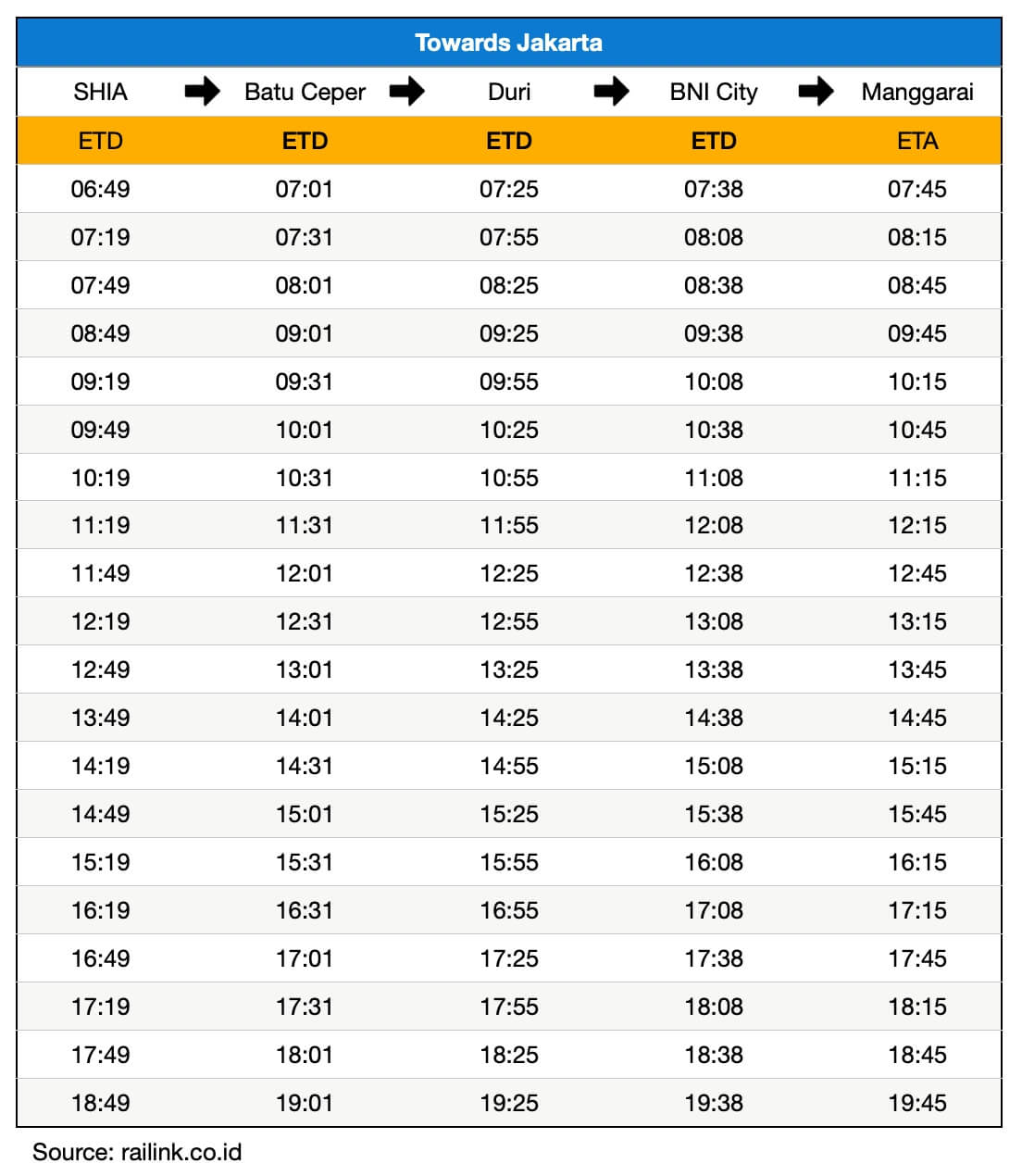 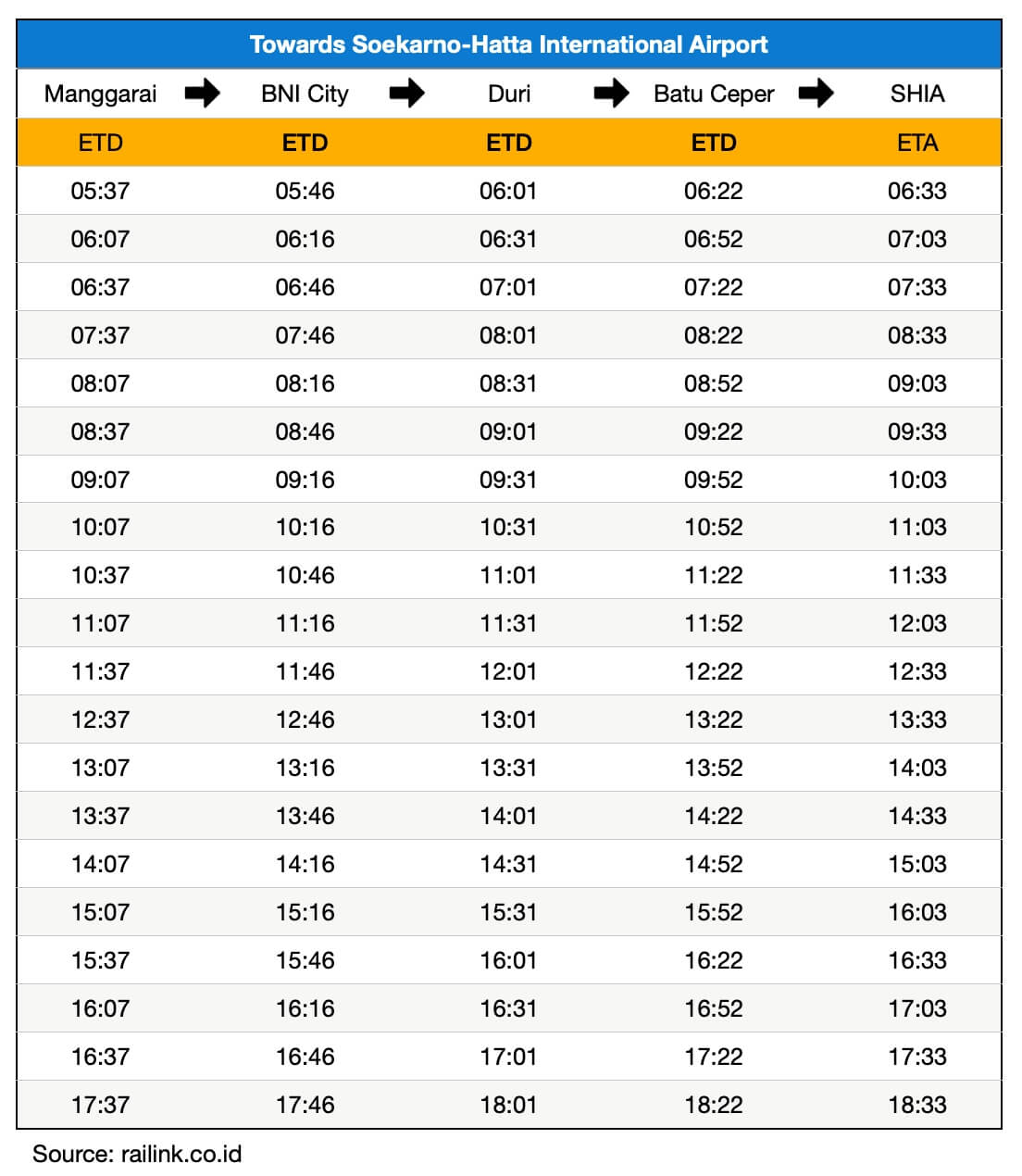 Since the airport train only makes short stops at the train station, you'd better be ready at the platform when it arrives. The boarding time is 15 minutes before the scheduled departure of the train.

How much does the Jakarta airport train cost?

How to buy a ticket of the airport train

You can buy the ticket of the airport trains through the official site of railink.co.id and marketplaces such as traveloka and tiket. Then, exchange it with a boarding pass at the vending machine.

Please remember, once you buy your ticket, you can not change your schedule, departure, and arrival stations. If you are not sure which train you will take, you'd better buy the flexi ticket. It allows you to choose any train within the same day.

Is the Jakarta airport train worth it?

Considering the cost of the ticket (especially the new KAI Bandara Premium) and the time you can save, yes, the Jakarta airport train is worth it. It is double worth it if you are a light traveler who doesn't have to worry about lots of luggage you bring.

While you are in Jakarta, you might want to visit these