Rupiah, The Indonesia Currency
How Much Do You Need to Travel Indonesia?

The official Indonesia currency is Rupiah (IDR). Rupiah to USD (American Dollar) exchange rate was around Rp 15,500 per USD in the third quarter of 2022.

Since Rupiah is the only currency used for transactions in Indonesia, you should exchange your currencies into Rupiah beforehand. But, the question of the day would be: how much Rupiah should you carry during your travel to Indonesia?

First of all, there are two types of payment that are commonly accepted: cash and non-cash. Non-cash comprise credit cards, debit cards, prepaid cards, and recently, some fin-tech companies introduce cashless payments via mobile apps. The cashless payments app is convenient and quite practical for us who use it daily, but I am not sure they are worth it if you only visit Indonesia for several days.

Rupiah banknotes comprise paper notes and coins. The denominations are: 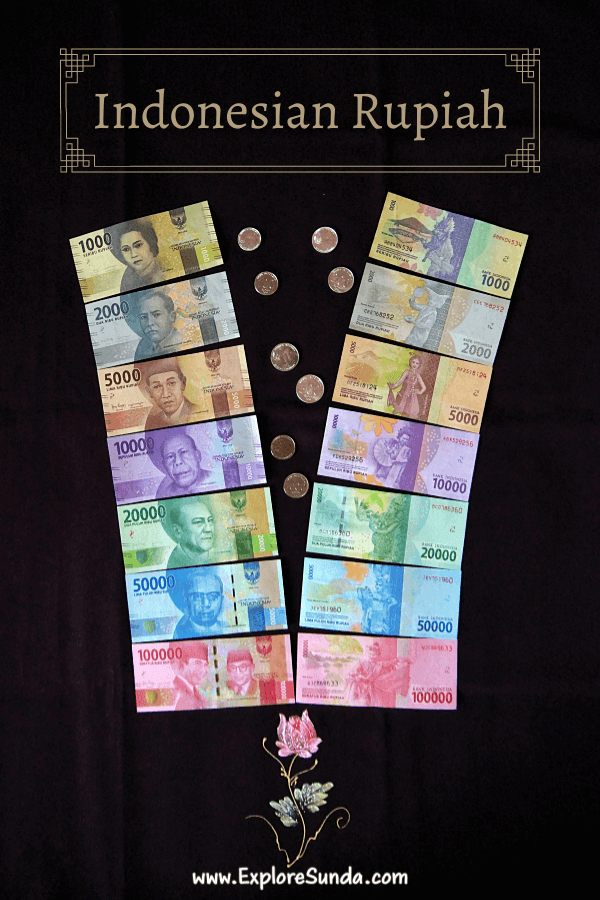 Presently, there are three series of Rupiah circulated in the market: the 2016 edition, the 2022 edition, and the oldest series that are still valid today was released in 2009. Today, they are all valid for payments. 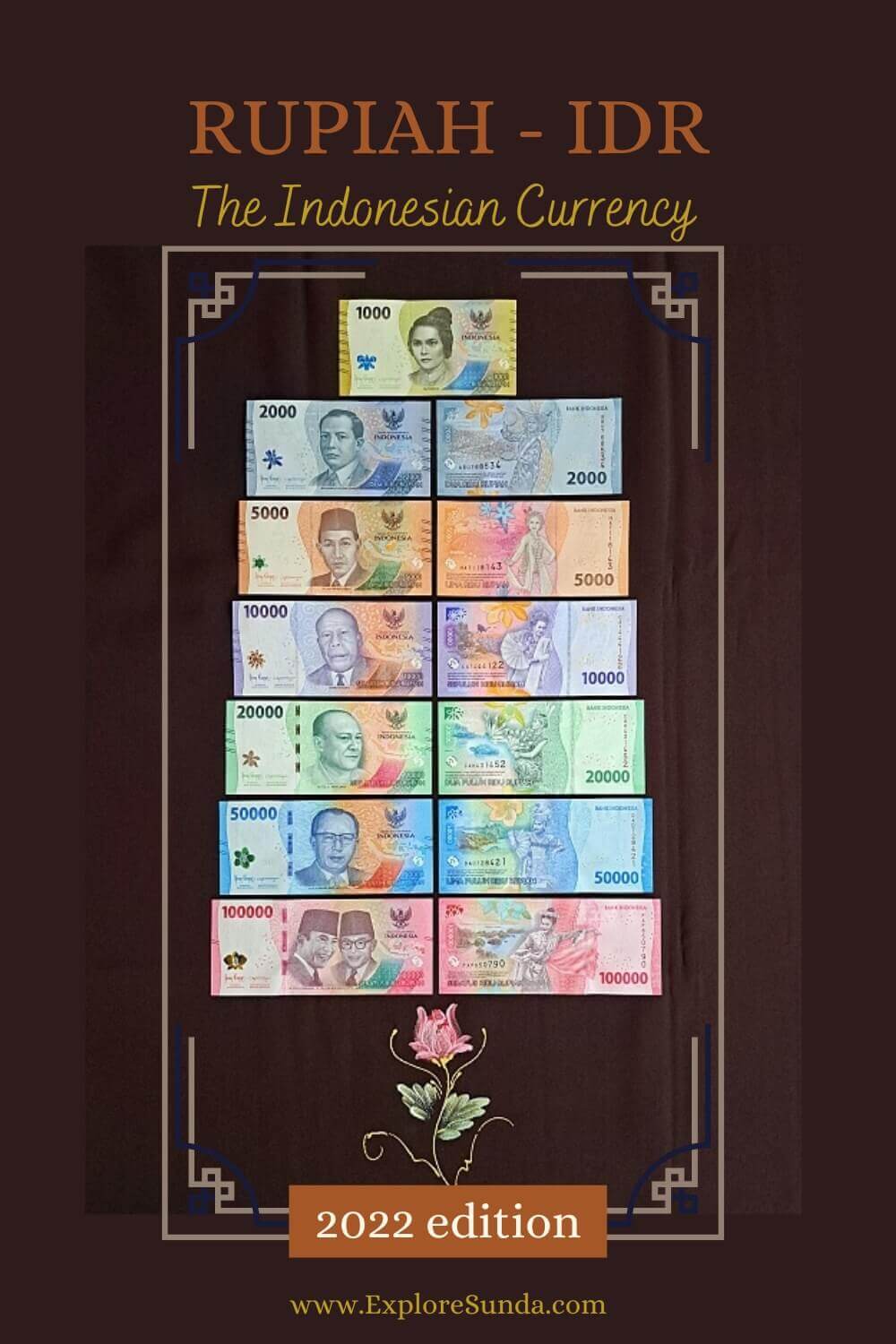 Commemorating the seventy-seventh Indonesia's Independence, Bank Indonesia, the Indonesian Central Bank, issued the 2022 edition of the Rupiah banknotes. Although the basic design is the same as the previous edition (2016 edition), they are all presented differently. Firstly, the smaller the denomination, the smaller its size. Secondly, the 2022 edition is more colorful. The additional color and intricate designs make the Rupiah 2022 edition the most beautiful of all Indonesian currency editions ever released.

The Indonesia Currency released after 2009. They are still valid in 2022.

Indonesia currency: where can you get it?

You can easily exchange your currency to Indonesia currency, i.e. Rupiah, in money changers. You can find them in the shopping malls and modern markets, which means long opening hours and closer to you when you need the Indonesia currency. You even can find a money changer in the airport, as soon as you land in Indonesia, but it gives you the worst exchange rate.

These money changers accept various major currencies, such as USD, Euro, Japanese Yen, Chinese Renminbi, and Saudi Riyal. The funny thing about exchanging USD in Indonesia, you will get the best exchange rate with the new and crisp USD banknotes. Money changers still accept creased or older USD banknotes, but with a lower rate.

If you travel to Bandung, I recommend Golden Money Changer, either on Ir. H. Juanda street or Oto Iskandar Dinata street. It has the best exchange rate for several major currencies. But the downside is you might face a long queue.

As a budget estimation to travel to Indonesia:

When and where do you need to pay with cash?

Of course, everything you buy in Indonesia can be paid with cash, i.e. Rupiah banknotes. However, it is not practical nor safe to carry so much cash around. As a common practice, you pay with cash for items less than Rp. 100,000. But, you will fully pay in cash whenever you go to small towns, traditional markets, small restaurants, and such.

Often so many zeros on the price are quite confusing. Thankfully, each denomination has different color :)

Although some hotels and restaurants in small towns are equipped with EDC [Electonic Data Capture machine to process credit card transaction], often, those EDC aren't working. So, assume you have to pay in cash whenever you go to remote areas.

An alternative to Rupiah banknotes.

If you do not like to carry too much cash, you can pay with credit cards. Many stores and restaurants in cities all over Indonesia such as Jakarta, Bandung, Tangerang, Cirebon, Yogyakarta, Surabaya, Makassar, and other cities, accept Visa and MasterCard. American Express is not that popular in Indonesia, though. Most of the stores and restaurants that accept credit cards will put the Visa, MasterCard, or American Express stickers on the cashier.

You also can use your credit card or debit card to withdraw some money at ATM (Automated Teller Machine). You can easily find ATM with a VISA or MasterCard logo in malls, banks, office buildings, and mini-markets, in big cities such as Jakarta and Bandung, as well as in small towns. Therefore, make sure you remember your credit cards or debit card ATM PIN.

Withdrawing some money from an ATM is simple and very convenient to get some Rupiah. However, you might end up paying a much higher rate than exchanging your currency in the money changer. It because there are fees on using different ATM than your bank. Last time I checked, if you use a debit card issued by banks from other countries, the fee is USD 3 for every transaction using Indonesian ATM.

Another risk when you withdraw money from an ATM is the card might be stuck inside the ATM. The processing time of foreign cards is several seconds longer than the local ones. Unfortunately, when the communication signal is not good the ATM will get confused and end up sending error message. If that happens, it is not likely you can get your card back. The best you can do is call your bank to deactivate your card and ask for a new one. It means you can't withdraw money from ATM anymore.

Therefore, the best plan is to create a budget plan before you travel, get the best exchange rate in your country and bring sufficient Rupiah for your travel to Indonesia. Pay your expenses either with Rupiah banknotes or credit cards. You might want to bring some extra fund in the form of USD or Euro banknotes and exchange it in the money changer whenever necessary. Of course withdrawing money from ATM also can be your emergency plan too, as long as you are aware of the risk.

Having been informed on Indonesia currency, have you made a good plan on traveling to Indonesia? Let's start by exploring the land of Sunda. Don’t forget to bring sufficient cash with you ;-)