The Legend of Keong Emas
A Famous Folklore From East Java

Similar to other folklores in Indonesia, Keong Emas is a story told verbally from generation to generation. Thus, there are several versions circulated. Here, I present the most popular version of the story:

The legend of Keong Emas begins with ...

Once upon a time, Daha was a prosperous kingdom under Prabu Kertamerta's reign (Prabu means a king in English). He had two beautiful daughters: Galuh Ajeng and Candra Kirana.

When these two princesses had come of age, a crown prince from the Kahuripan kingdom came to propose a marriage. Raden Inu Kertapati was a handsome, strapping crown prince from a prosperous kingdom, so Prabu Kertamerta welcomed him and accepted his proposal.

She sought an evil witch to cast a spell on her sister. She wished Candra Kirana became so disgusting that no one wanted to get near. Not long after that, the witch cast a spell on Candra Kirana to become a keong emas (a golden snail). Before she threw the snail into the river, she told the princess the curse could only be broken by meeting Raden Inu Kertapati. 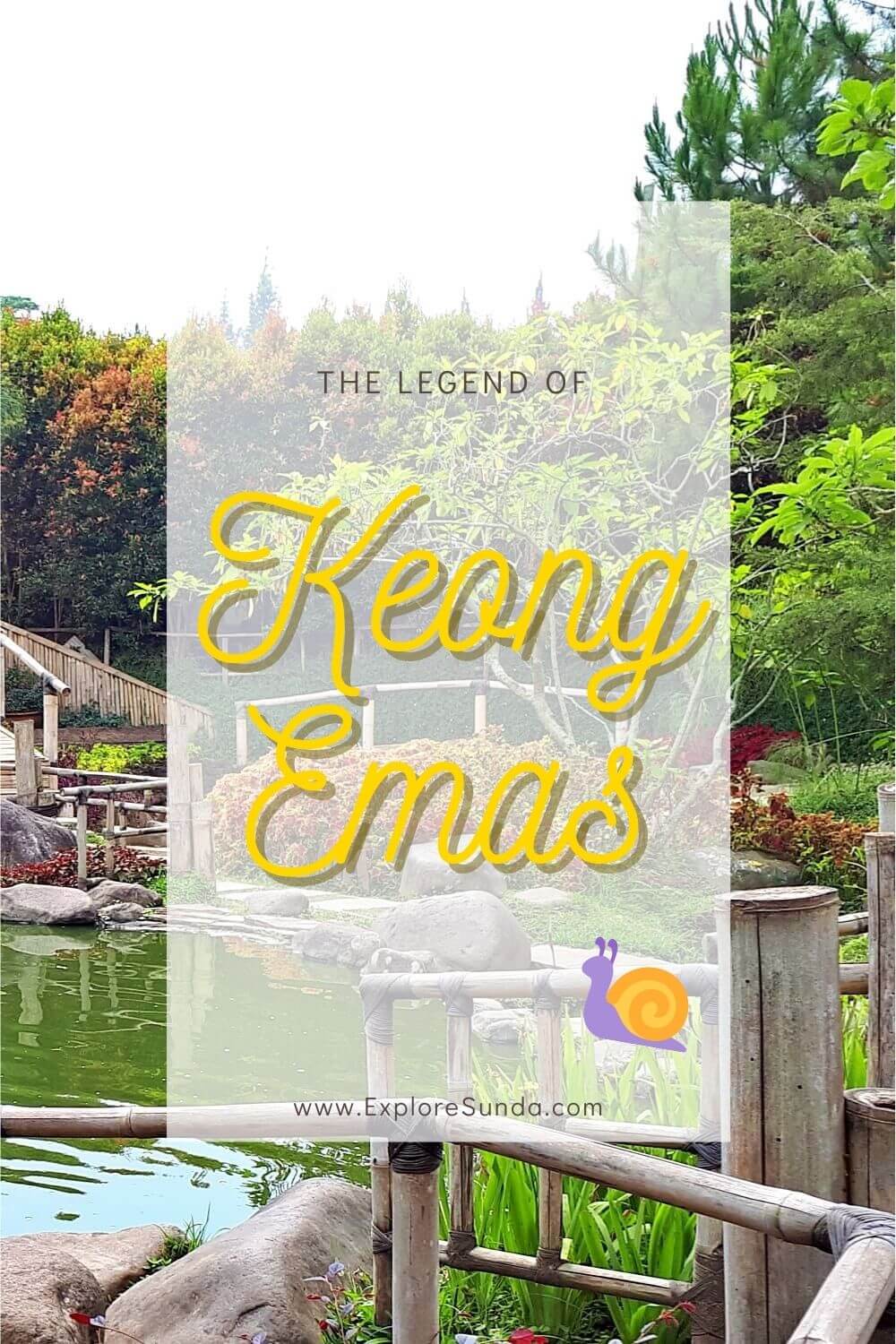 One day, a poor old lady caught a snail on her fishing net. When she saw it was a beautiful golden snail, she brought it home and kept it in a crock (an earthenware pot).

The next day the old lady went fishing. Unfortunately, she only caught a few fish. She was devastated because she could only buy a bit of rice. Imagine her surprise when she found plenty of food on her dining table. Feeling so hungry, she ate them without asking questions. Since this bizarre experience occurred every day, one day, the old lady pretended to go fishing. Then, she sneaked back into her hut and found a beautiful maiden cooked and cleaned.

What is Keong Emas?

Keong Emas (golden snail in English) is what Indonesian called for a mystery snail or common apple snail with a scientific name of Pomacea bridgeseli.

Keong Emas can be easily found in the riverbanks and rice fields. Although their golden shells look beautiful (if they are not covered with mud and mold), often, people peg it as pest because they reproduce so fast and eat crops.

She immediately confronted the maiden, who happened to be the cursed Princess Candra Kirana. As soon as the princess told her story, she became Keong Emas (golden snail) again. That's the beginning of the friendship between Candra Kirana and the old lady.

In the meantime,  the news of the missing princess spread throughout the kingdom of Daha. Feeling that she had no other competitors, Princess Galuh Ajeng tried her hardest to replace her sister as the bride of Raden Inu Kertapati.

However, since Raden Inu Kertapati was deeply in love with Candra Kirana, he set off on a journey to find her. Knowing this, the evil witch shapeshifted into a crow and followed him.

When the crow talked to him in human language, Raden Inu Kertapati was amazed. He believed it was a magical creature that could help him found Candra Kirana. So, he followed the crow's leads. He didn't realize that the crow led him further away from Candra Kirana.

One day, Raden Inu Kertapati met an elderly, who asked for some food. Being the kind person he was, the prince happily shared his food. It turned out that the elderly was a wise man; who knew the evil crow had tricked the prince. So, as a payback to the prince's kindness, he hit the crow until it evaporated into a puff of smoke. Then he told him where to find Candra Kirana.

Thus, Raden Inu Kertapati set off to Dadapan village. It was a long journey. Several days later, the prince ran out of provisions, so he approached the closest house to ask for water. Imagine his delight when he saw Candra Kirana was cooking in there. He rushed into the house, and their reunion broke the curse.

Soon the couple returned to the kingdom of Daha and told the misfortune of Candra Kirana. Afraid of King's wrath, princess Galuh ran to the woods. That's the last time anyone heard of her.

In the end, Raden Inu Kertapati and Candra Kirana lived happily ever after. They invited the old lady to live in the palace and took care of her.

The legend of Keong Emas has inspired the shape and structure of Keong Emas IMAX Theater and Taman Legenda Keong Emas, both located in Taman Mini Indonesia Indah (TMII). While you are in TMII, check out so many things to see and enjoy there :)