Sunda Kelapa, Jayakarta, Batavia, Betawi, which name refers to Jakarta? Five different names for one city! As the capital city of Indonesia and the grandest and busiest city in the country, Jakarta has quite a long history.

It started with a small but promising seaport in the north of the Java shore. Initially, it was under the Hindu Kingdom (some people believed it existed since the Tarumanagara kingdom in the fifth century). The area was known as Sunda Kelapa (Kelapa means coconut in English). 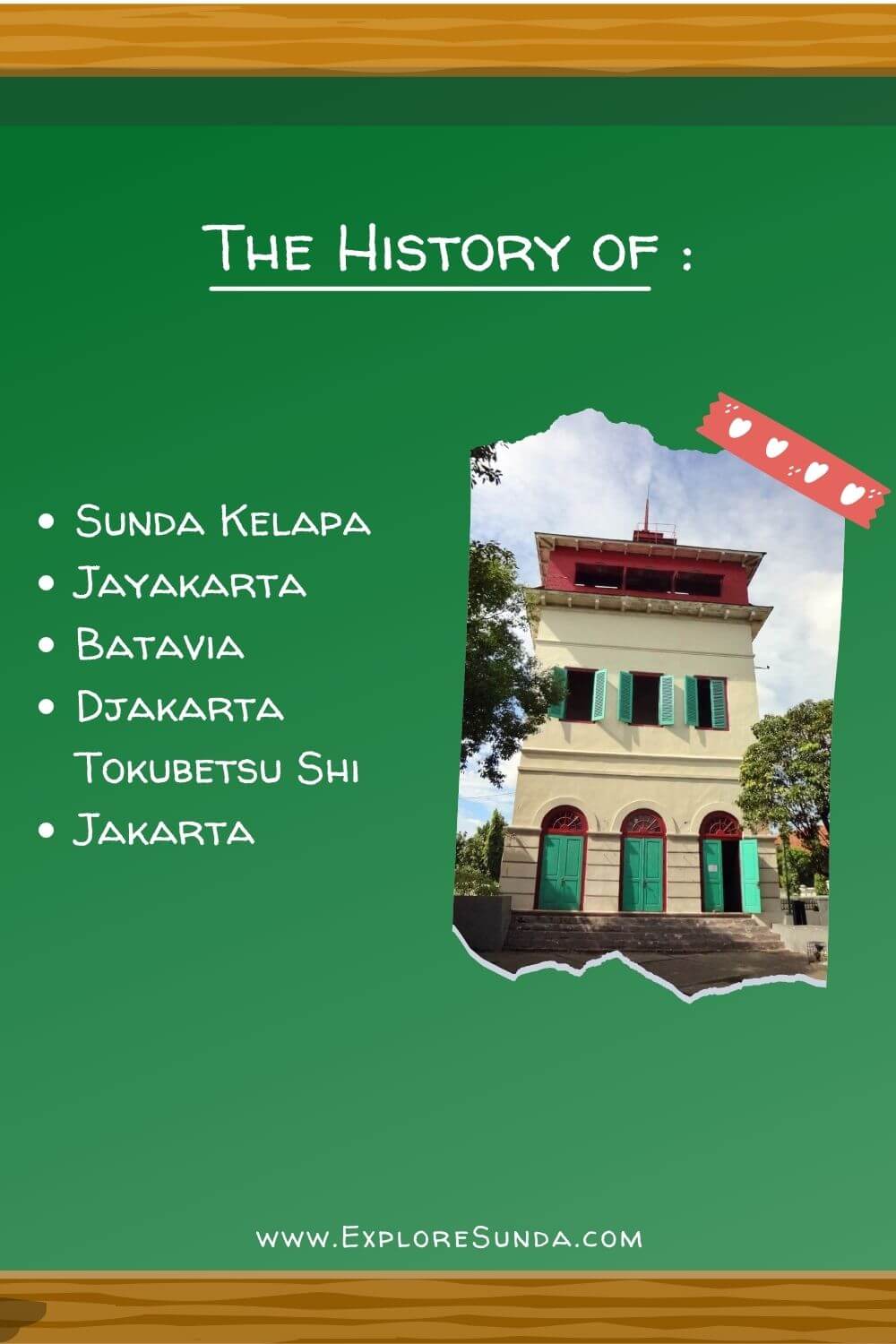 People from all over the place came to trade in this seaport, including Tome Pires, a Portuguese apothecary who wrote a report called the Suma Oriental. The year was 1513. Tome Pires reported six pivotal seaports in Java island: Bamtam, Pomdam, Chegujde, Tamgaram, Capala, and Chemano (today they are known as Banten, Pontang, Cigede, Tangerang, Sunda Kelapa, and Cimanuk, respectively). Among these six seaports, he stated that Sunda Kelapa is the best and most important seaport. Many merchants from Far East, India, China, Malacca, Sumatra, Borneo (known as Kalimantan today), Makassar in South Sulawesi, Java, and Madura came and conducted trades in Sunda Kelapa.

At that time, Sunda Kelapa was the main seaport for the last Hindu kingdom in Sunda: the Pajajaran kingdom. Its capital was 60 kilometers inland, near Bogor today.

Sultanate of Cirebon and Demak viewed this agreement as a threat. Hence, they joined forces and assigned Fatahillah (Faletehan) to lead the attack. He conquered Sunda Kalapa on June 22, 1527, and changed the name to Jayakarta. Jayakarta means victory in English. Later on, this date became the anniversary of Jakarta.

Presently, Sunda Kelapa is still an active seaport, although it only serves inter-island freight services. Its location is on Penjaringan, North Jakarta, as part of the Kota Tua (Jakarta Old Town district). You can visit this historical harbor, climb the stairs of the old watchtower, and explore the Maritime Museum (Museum Bahari).

The victory of Fatahillah in seizing Sunda Kelapa harbor from the Pajajaran kingdom resulted in the development of the seaport into a big and busy town of Jayakarta, which attracted more merchants from Europe.

Jayakarta flourished under Prince Jayakarta from the Sultanate of Banten. In 1611, he allowed VOC (Vereenigde Oostindische Compagnie), the Dutch trading company, to open a trading post near Sunda Kelapa harbor. However, VOC wanted more than just a trading post. When VOC built a fortress intending to seize Jayakarta, the Prince asked Great Britain's help to fight against VOC.

Loosing the battle, the VOC governor general, Jan Pieterszoon Coen, fled to Maluku. In May 1619, he returned to Jayakarta with a thousand army and succeeded in conquering Jayakarta. It became the end of Jayakarta and the beginning of Batavia.

J.P. Coen destroyed Jayakarta, rebuilt a new town, including a new fortress on the ruin of Jayakarta. VOC named the town Batavia after Batavi, the Germanic tribe that was the Dutch ancestor.

Since VOC chose Batavia to be their headquarters in Indonesia, the trades in Sunda Kelapa seaport kept growing until they decided to move the port to Tanjung Priok. That's how Batavia got new nicknames: the Queen of the East and the Jewel of Asia.

The locals pronounced Batavia as Betawi. Since this town attracted many people from many countries, Batavia became a melting pot. Later on, Betawi is known as the ethnic group from Batavia Jakarta.

The VOC settlement in Batavia marked the beginning of Dutch colonization in Indonesia. Both the colonization and Batavia lasted for more than three centuries. It ended when the Dutch lost battle to Japan during World War II. 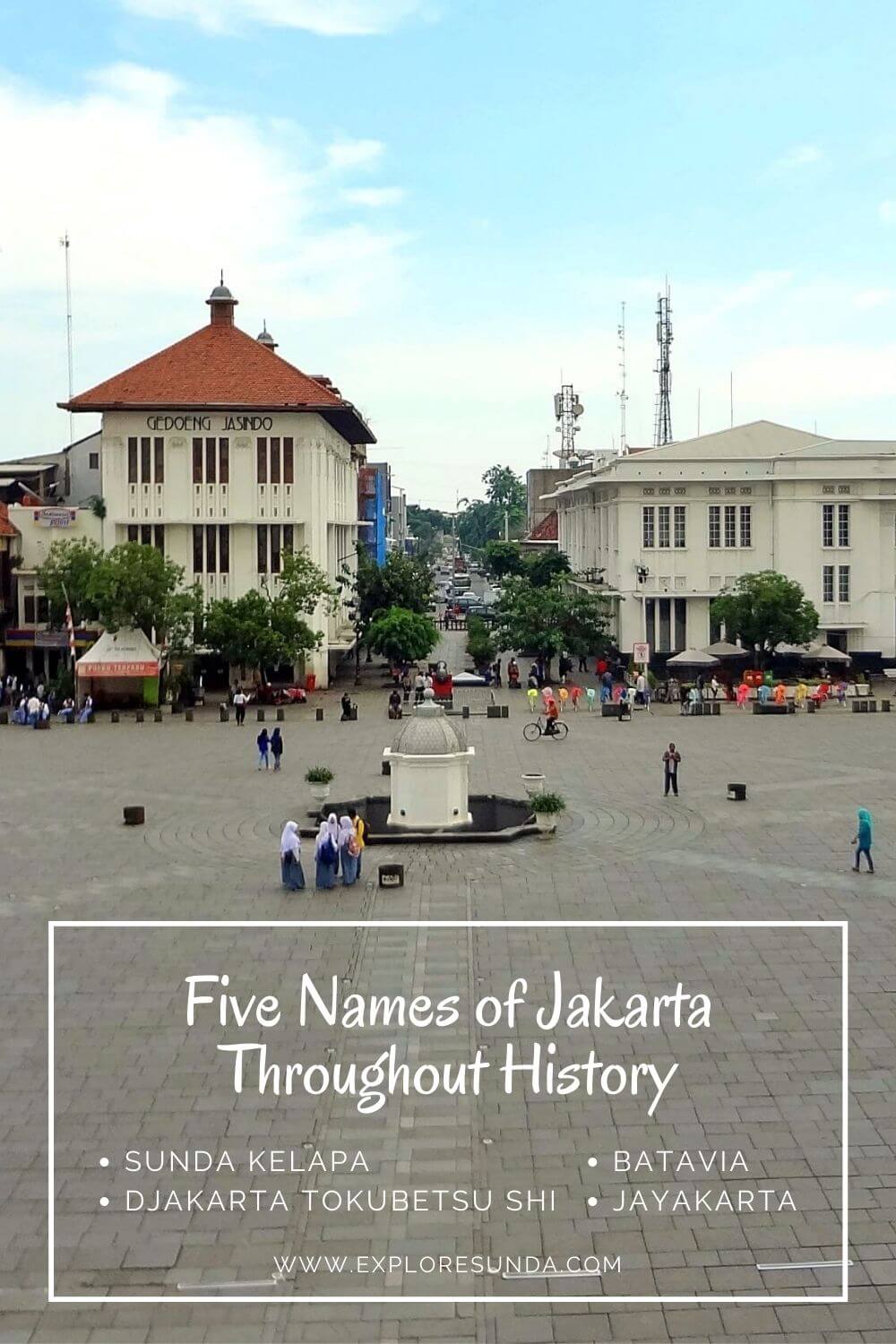 In 1942, the Japanese won the war against the Dutch in Indonesia. Hence, during the commemoration day of the Greater East Asia War on December 8, 1942, they changed the name from Batavia to Djakarta Tokubetsu Shi. The name means Jakarta Special Municipality in English. This name lasted until Indonesia declared independence on August 17, 1945.

When Indonesia declared independence, the city once again changed its name. This time, it simply dropped its Japanese words and became Jakarta (or Djakarta according to the old spelling).

Initially, Jakarta was one of the cities under West Java province. Then, in 1959 Jakarta became a province. Starting from 1961, Jakarta was officially stated as the capital city of Indonesia. Hence, its status became Daerah Khusus Ibukota (DKI) Jakarta (Jakarta Special Capital Region in English).