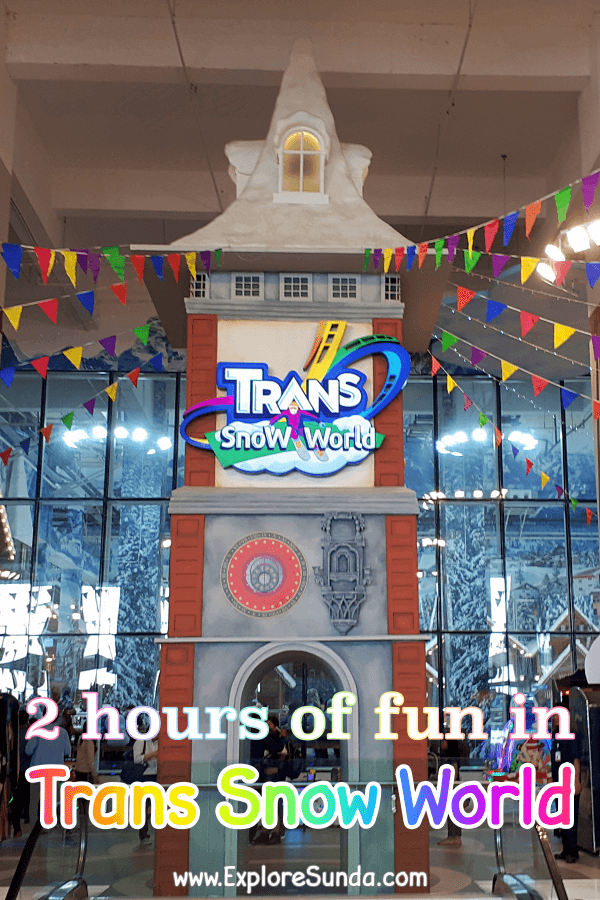 Living in a tropical country, snow world is like a fantasy world, since we never see and experience the real snow. But with today's technology and lots of creativity, there is a place in the land of Sunda where we can play in the snow!

Recently, Trans group launched a TransPark Juanda complex in Bekasi, a shopping, apartment and office tower in one area. Today the shop building is already operated, where you can find various restaurants in the ground floor, shopping from groceries to furnitures in the next two floors and a snow world in the top floor.

Where is Trans Snow World? 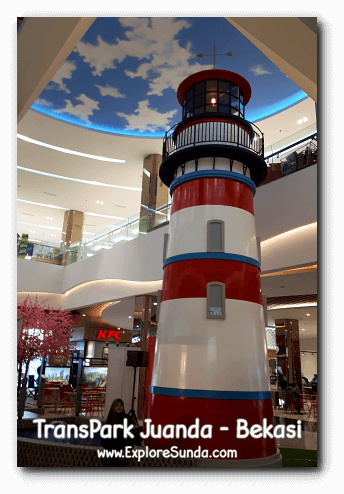 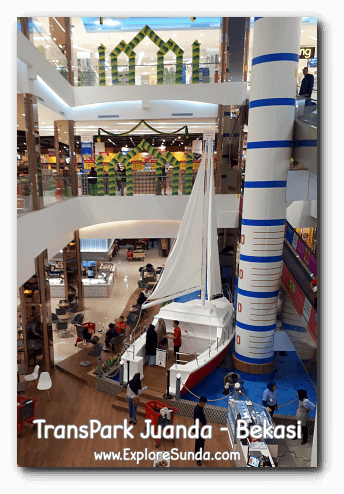 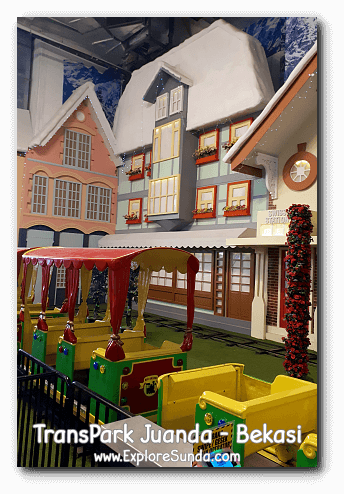 Each ticket of the Trans Snow World is valid for 2 hours. You will get a device that looks like a wrist watch, but it will only shows some colors: blue, green, yellow and red, instead of the clock hand. These colors represent how much time left for you to play. At the very latest you should return it when it turns red. Otherwise you will get extra charges.

So, you'd better use the allocated time wisely. First thing first, get your foot measured and ask for the right size of the boots at the counter. Here you will receive a pair of rubber boots, a pair of socks, and the wrist device.

Being cold and all, at the very least you should bring a jacket. A pair of gloves and a hat is a good idea too.

Now you are ready to play! 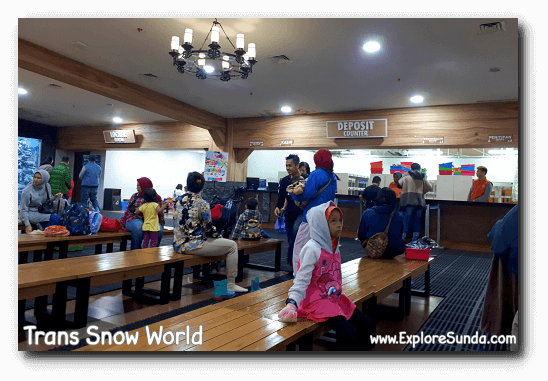 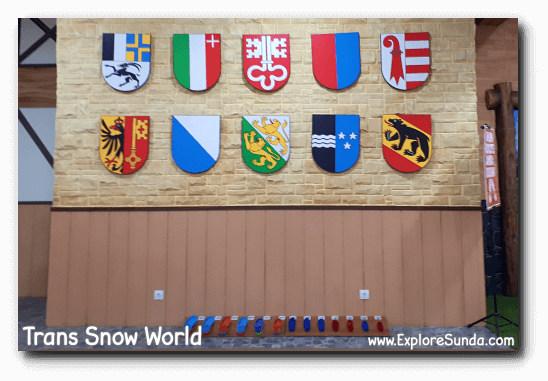 Snow world is a huge cold room covered with man made snow and several shops line up on one of its side and a gondola a.k.a. fixed-grip chairlift on the opposite side. This chairlift continuously rotate along its route, so you'd better ready to sit when it arrives and step on the foot step when the T-bar lowered, so you are secured. It is quite safe since it moves slowly, but of course make sure you hold your kid so s/he does not slip off the chair. This ride is fun, relaxing and you will get good view for selfies. 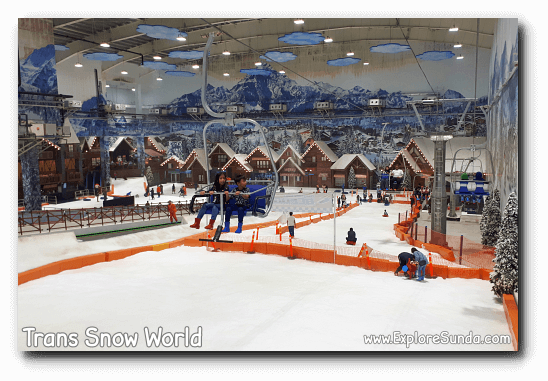 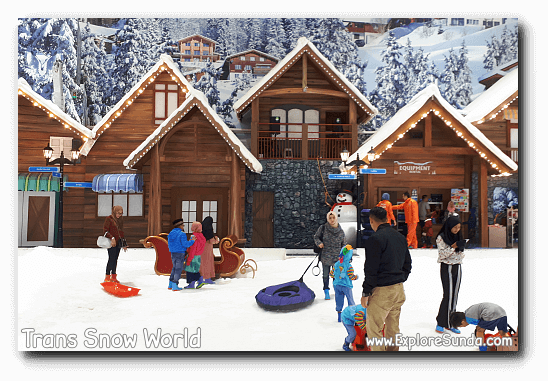 Speaking of selfies or taking pictures in general, the whole area is set up to look like a skiing village in Europe. There are plenty of beautiful spots. One drawback though, they don't cover up the ugly walls near the ceiling, I guess the only thing you can do is to photoshop that part.

There are two places where the snow keeps falling and the third place is where the staff holds a pipe tied to a wooden bench to create a flurry scene. If you want to take pictures or play snow under them, you'd better wear your hat, since it is more like a shower with ice pellets instead of snow flurry! 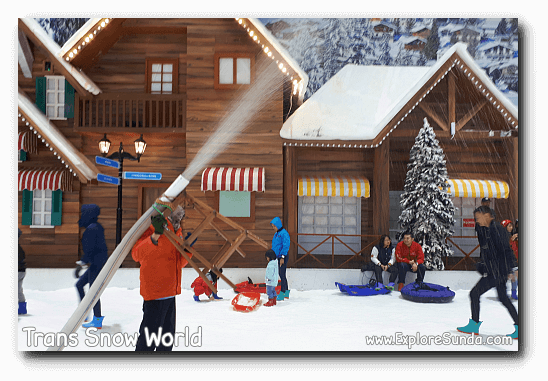 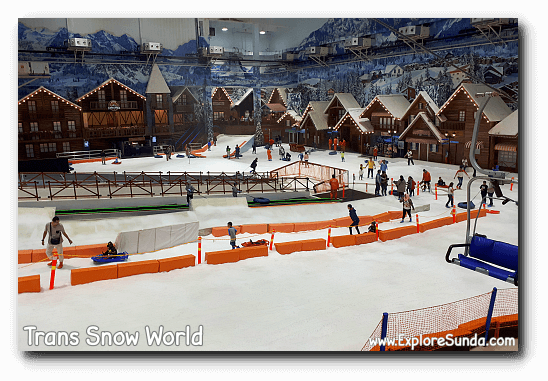 Next, you should go to the rental equipment shop. They provide various snow equipments such as snow tubes, sledges, scooter, and ski.

There are two types of sledge you can rent here: the standard one and the racer one. The racer sledge is equipped with a brake and it looks like a small race car. The rent is more expensive than the standard double sledge but I think it is worth it :)

There are two areas where you can slide with these sledges: in front of the restaurant and at the race track. Both have thick snow with smooth surface. 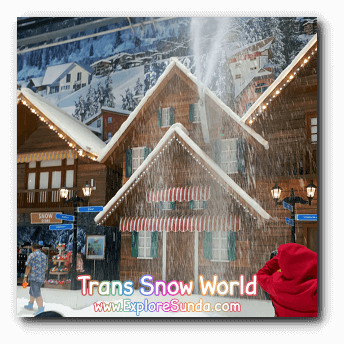 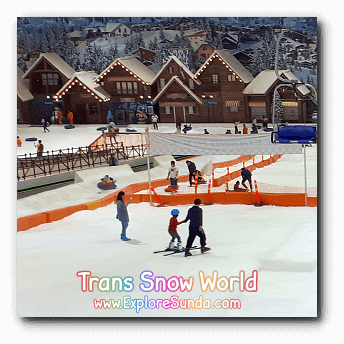 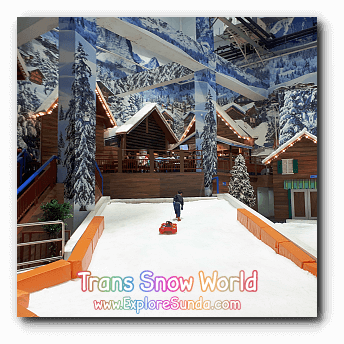 Riding a sledge is fun, but riding a snow tube is more fun. For a start the slide is longer and it has several curves. It is faster than the sledge and swing wildly throughout the snow path.

The least fun part of these activities is when you have reached the bottom and you have to drag the sledge or snow tube up the hill to restart the fun ;-)

You also can try to ski here. There is a short slope on top of the sledge slope for skiing. I don't think it's worth it though, the time is too short and the place is too small to really learn how to ski. 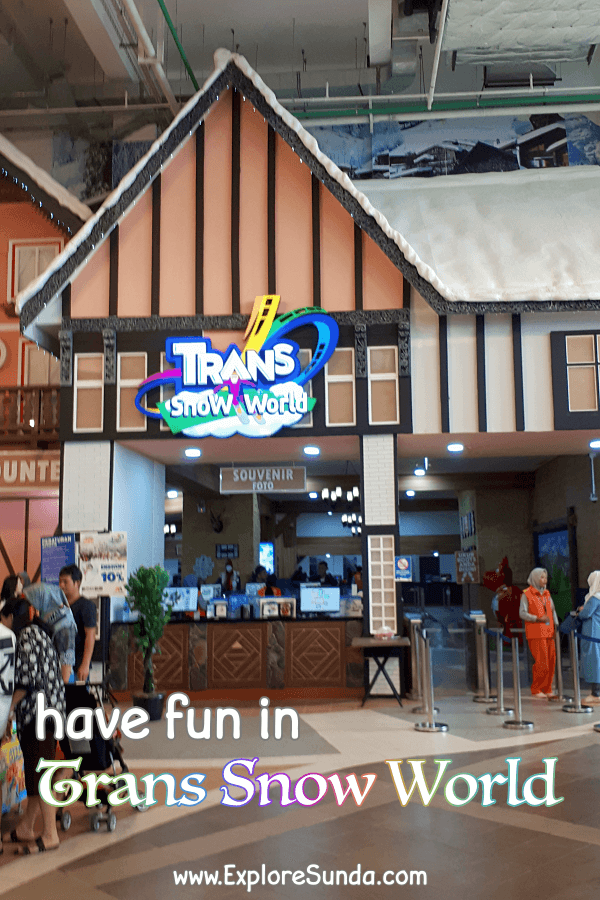 Or you can try the Zorb Ball. It is the big transparent ball next to the ski. Once you purchased the ticket at the rental equipment shop, you go up here, fasten inside the ball and then the ball will be rolled on its track until it reaches the bottom. Maybe it's fun for some people, but it definitely is not my kind of activity :)

Tired of playing, you can dine in the restaurant inside the snow world. But considering the price of the ticket, I guess most visitors prefer to spend as much time as possible playing in the snow.

So, are you ready to play in the snow? Or you prefer to go to somewhere warmer such as play pretend in Kidzania, explore Jakarta aquarium, going to the beach, or visit botanical gardens?