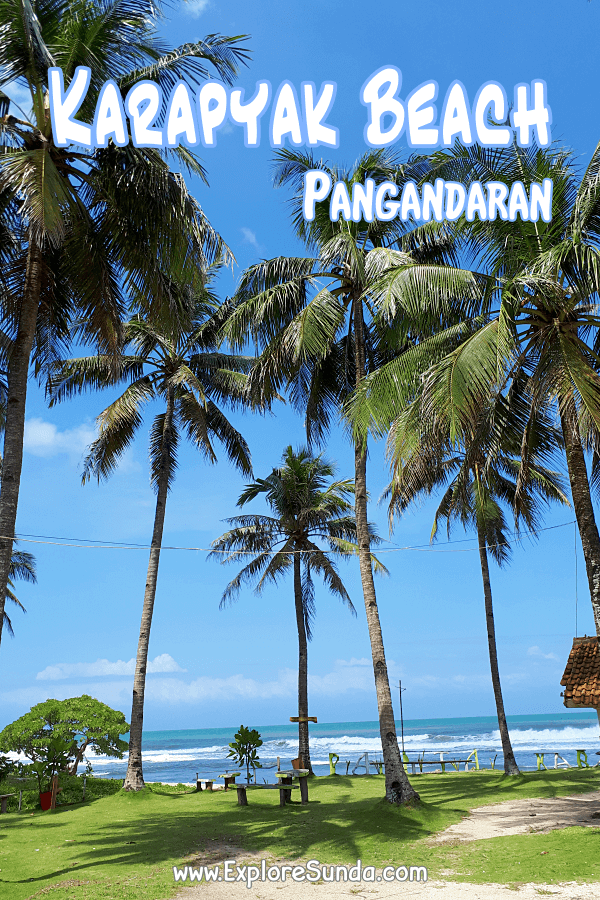 Many would agree with me that Pangandaran beach is the most famous and most developed beach in the southern part of West Java. In one way or another it helps other beautiful beaches nearby to be noticed. One of these beaches is Karapyak.

Being much less famous, Karapyak has its own charm.  For one, it is much more quiet than Pangandaran, so if you don't like a crowd, this is a perfect beach for you.

But, there isn't any public transportation serves this area and the beach only has minimum facility such as public wash room and few simple eateries.

Having said that, Karapyak beach is still worth visiting, even if you only spend a couple hours here.

The waves are much stronger here than Pangandaran. Hence, the sand is mostly made up of broken corals, a bit too harsh to walk on bare feet. I don't think it is suitable for swimming, plus there is not any life guard patrol here, so be very cautious if you want to play in the water!

One special thing about Karapyak that you might immediately notice is the sandy beach and steep cliffs change alternately. In some places you can only look down to see the waves hit the cliff, then several meters away you already walk on the beach.

Since the road is narrow, it would be better if you park your car on the designated parking lot. There are several spots where you can park and play on the beach or just watch the wave breaks the cliff.

First option is the public beach. Karapyak has a public beach with a wide parking lot covered with coconut trees. There are several benches under the shades, perfect spots to just relax and watch the waves rolling continuously. Although the beach is not as wide as in Pangandaran, you still can walk along the beach. Building a sand castle is unlikely though, since the sand is made up of broken corals. Once you are done, you can clean up in the public wash room across the street. Few simple eateries are also available here, but of course they are closed during the month of Ramadhan (the Moslem fasting month). 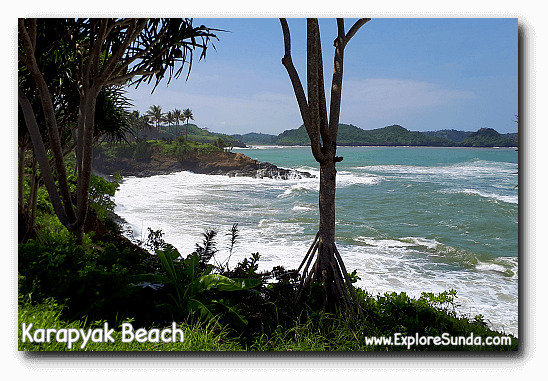 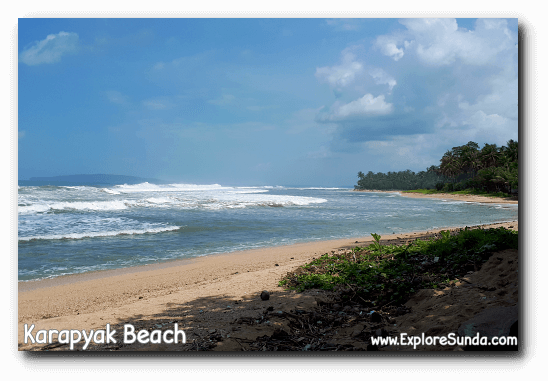 Second option is Karapyak Glamping, a hotel with a view of the ocean. It is located on a slope across the street from the ocean side. It doesn't have any access to the beach, since it is right across a cliff. You have to walk several meters to the public beach if you want to go to the beach.

If you just want to look around Karapyak Glamping, you must pay entrance ticket of Rp. 15,000/person. Located in the slope, you have to walk uphill to reach the lobby and the hotel rooms. There are several types of rooms here: a wooden villa, cottages, and tents. Although they claimed to be a glamping, I don't think these tents would be considered glamorous, since the only bit of luxury here is you will sleep on a thin mattress instead of inside a sleeping bag on the hard ground. 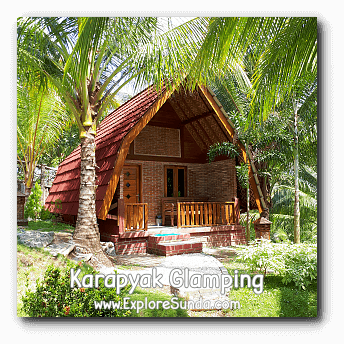 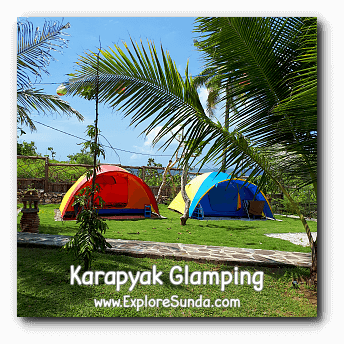 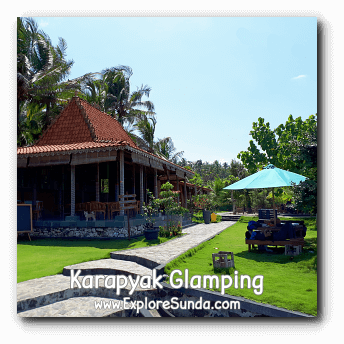 Third option to enjoy the beauty of Karapyak is hanging out in the Karapyak Valley Resto N Bar.  It is located on a steep cliff right above the ocean, so I guess the view would be breathtaking as long as no one litter there. Similar to many other eateries in West Java, it was closed during the month of Ramadhan. The location is a bit far from the public beach and Karapyak Glamping.

How Far Is Karapyak Beach From Pangandaran?

Karapyak is approximately 20 km east Pangandaran beach. Hence, from Pangandaran you have to drive east to the direction of Banjar until you  reach the fork to Karapyak at Kalipucang village.

Similar to other beaches in the vicinity of Pangandaran, you must pay entrance tickets based on the vehicle you used. For example, since we drove a minivan a.k.a. a minibus in Indonesia, we paid Rp. 51,000.

Once you have paid the ticket, you will reach another fork. It doesn't matter which way you choose, since the road forms a big circle. Anyway, turning right is a shorter route to the public beach.

Although Pangandaran is the most famous beach in the land of Sunda, other beaches are also special. Have you ever been to Pangumbahan beach and help to release the green turtle? Or visit Anyer beach and see the remnants of Krakatoa eruptions? Or stay in a private island of Umang island?