Umang Island
A Journey to the Island of Hermit Crab

Umang island is a tiny island in Sunda strait. It is only 4.5 hectares. Nowadays, it has become a beach resort and spa, which offering a beach holiday in an island.

The concept of a beach holiday in an island really intrigued me. It because although Indonesia is an archipelago comprises thousands of islands, there are only few small islands developed into beach resorts.

Thus, I bought a family package when we went there on August 2010. The package consists of 2 nights stay for 4 persons in one room, including 6 meals for each and a boat trip to Oar island. This is a much cheaper deal than the published rate. The hotel provides 2 single spring beds as extra beds, which is quite comfortable.

Although the hotel provides the meals, it’s better you bring some snacks too, because there is not any snack kiosk in this island. 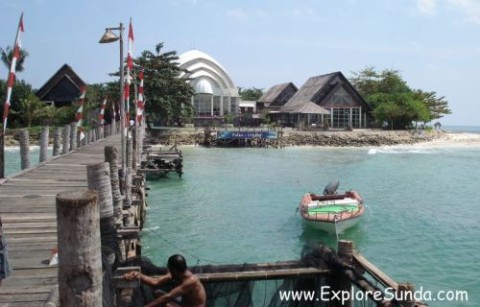 You can see both sunrise and sunset in Umang island, if the weather permits. The distance between these two areas is less than five minutes walk.

Since the cottages are built around the island, you can choose to stay in the sunrise or sunset area. Personally, I prefer the sunrise area, because there is a beach in front of the cottages. We can swim or ride a banana boat here. Although the beach looks like a white sandy beach, it actually consists of corals. It is a bit sharp to walk on bare feet, but on the other hand, there are many beautiful shells among these corals.

Unfortunately, this beach resort is not yet completely built. The inner grounds are still covered with trees and bushes. I hope they will soon built a garden there to make it more beautiful. I suspect that’s where the mosquito come from. So, another important thing to bring is a mosquito repellent, either lotion, or spray, or electric, because there were many mosquito when I was there. It’s depending on the weather though, because my uncle told me when he was here, there wasn’t any mosquito. Nevertheless, the hotel provides the spray and lotion of mosquito repellent, but I prefer the electric one so I can turn it on all night long.

This year we experienced anomaly weather all over Indonesia. Hence, it is still raining and windy in this island on early August, while it should be dry season.

Is There Any Hermit Crab in Umang Island?

Thus, the name of Umang island made me curious whether there is any hermit crab live in this tiny island. That's the first thing I searched when I arrived. The first day was spent without seeing any of this little creature.

The next morning we circled the island. It only took less than half hour to do so. It was during low tide, hence, there are many rocks seen in the beach. We could see some fishes swim lazily in the shallow water surrounding the rocks. Under one rock we found many small shells, which turned out to be the hermit crab I was looking for! 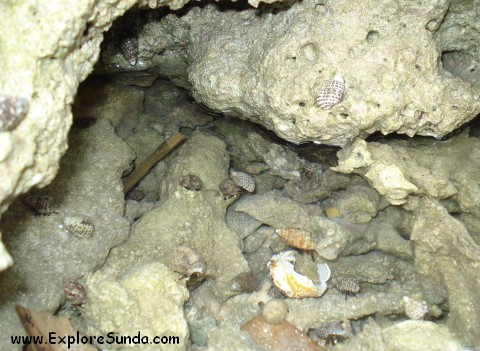 Wow, this creatures were amazing. There were hundreds of them, but they were very small. I never saw this variety before: black body, blue eyes and white claw.

Imagine you stay in an island far away from city civilization. I bet your spontaneous question would be: What can we do here?

Actually, there are plenty activities you can do here, such as: 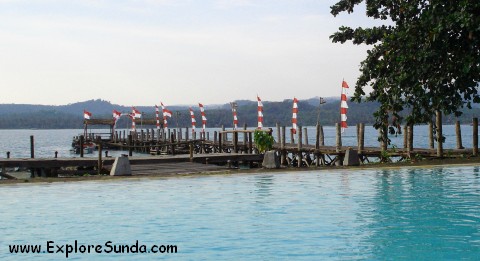 For extra charge you can also do other activities, such as: 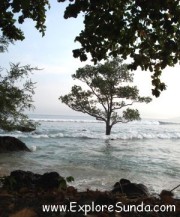 All of the above are things you can do in Umang island. As you can imagine, the bigger your group the merrier and memorable your stay in this island. 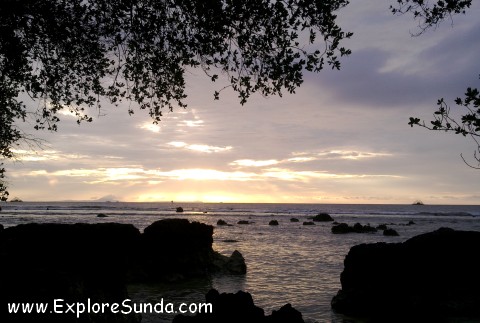 How to Go to Umang Island

From Jakarta you should go to the village of Sumur, which is near Ujung Kulon National Park. The distance is approximately 200 km. The first 71 km is via toll road, exit at Serang Timur toll booth. The rest of the journey is challenging since it is a small road connecting several small towns and in some points they are not in good condition. Hence, it usually takes 5 hours from Jakarta to Sumur.

Since Umang island is rather secluded, a Guest Relation Officer from the resort will keep contacting you during your travel, to make sure you drive on the right track. When you have reached Sumur village, he will guide you to the resort’s parking lot. The porter will pick up your luggage and off you sail on a speedboat to the island.


View Direction to Umang Island in a larger map

That’s the story of our journey to Umang island. We have a good time there, but I think if we went in a bigger group it will be merrier.