Famous Sundanese Folklore from Sumedang:
The Origin of Mount Tampomas

Sumedang, a town approximately 56 km northeast of Bandung, is a transit town for people who travel between Bandung and Cirebon. It is famous for the tofu. It has beautiful panoramic views of hills and mountains all around. One of the mountains that hikers love to climb is Mount Tampomas.

Do you know there is a legend on Mount Tampomas? It is a compelling story about a great king who cared for his people.

The Legend of Mount Tampomas in Sumedang

Once upon a time, a wise king ruled the Sumedang Larang kingdom. He led his kingdom into prosperity. Hence, his people loved him so much.

During its glorious days, the area of Sumedang Larang kingdom was similar to the West Java province minus Cirebon. The capital city is at the foot of a big mountain. The locals called it Gunung Gede (Gede is a Sundanese word for big and Gunung is an Indonesian word for mountain).

Gunung Gede had a vital role in the livelihood of people in the kingdom of Sumedang Larang. The farmers always got abundant harvest due to the fertile soil and dense forest of mount Gede.

One day, earthquakes shook the land. At the same time, the sky became dark, and people heard loud rumbles from the top of the mountain. Everybody was panic and tried to find safe places for their families and belongings.

As soon as the King of Sumedang Larang heard about it, he ordered his soldiers to find the cause of this chaos. When he learned that Gunung Gede was ready to erupt, he felt lost and powerless to help his people. Hence, he asked his advisor to act on his behalf while he went to meditate.

Days went by, he kept his rigorous meditation, pleading to the Almighty a way to help his people. At one moment, between consciousness and unconsciousness, he felt an elderly approached him. The elderly told the King if he wanted to save the kingdom, he had to throw his heirloom, the golden Kujang, into the raging crater of Gunung Gede (a Kujang is a traditional Sundanese weapon that looks like a dagger). 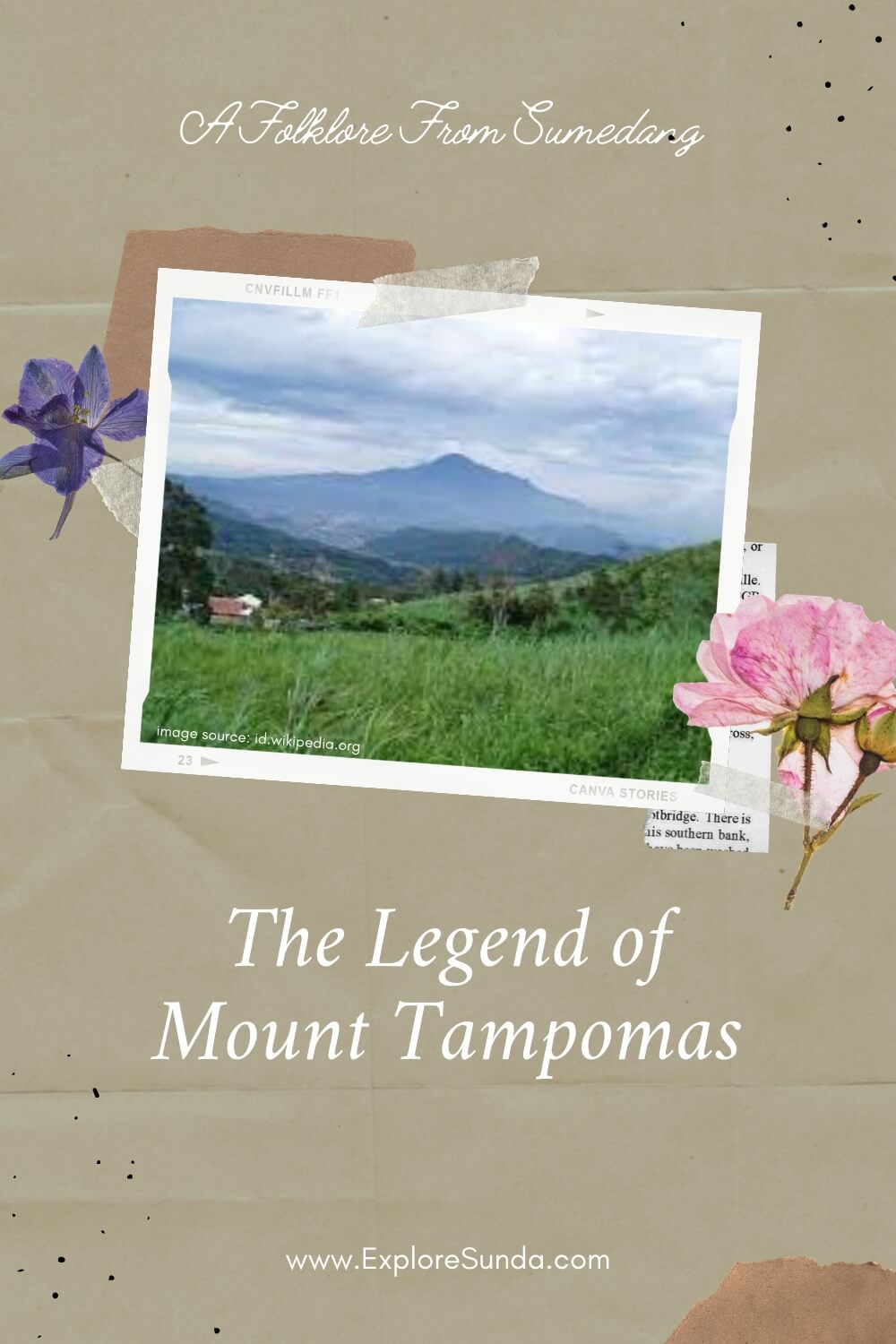 As soon as the King came into his senses, he told his advisors about his vision and intention. Naturally, all of them against it. One, because it was a precious heirloom from many generations ago. Two, it was too risky for the King to go to the volcano by himself. And yet, nobody could stop the King once he had made up his mind.

Initially, the King took a strong stallion to climb the mountain. He pushed his stallion until the path was too steep for the horse. Then, the King continued on foot. The moment he reached the edge of the crater, he threw his family heirloom, the golden Kujang, into the hot lava. Instantly, the volcano silenced, and the sky became clear.

The news spread quickly that the King of Sumedang Larang put an end to the eruption of mount Gede by feeding his heirloom into the crater. Since then, mount Gede became known as mount Tampomas. It means the mountain that received gold.

The legend of Mount Tampomas vs. the history of Sumedang

According to the history of Sumedang, in 900 AD, Prabu Guru Adji Putih (Prabu means a Hindu King) established the kingdom of Tembong Agung. When his son, Prabu Tajimalela, ascended the throne in 950 AD, he changed the name from Tembong Agung into Himbar Buana, then later changed it to Sumedang Larang.

On the other hand, the oldest written manuscript mentioning mount Tampomas is the manuscript written by Bujangga Manik, a prince from the Kingdom of Sunda. He wrote every place he visited during his journey, which took place around the 15-16th century. He mentioned places called Medang Kahiangan and Tompo Omas. Experts believe they are Sumedang and Mount Tampomas, accordingly.

Other than the manuscript of Bujangga Manik, it is challenging to relate the legend of Mount Tampomas with the history of Sumedang. There was not any record of when was the eruption of Mount Tampomas. However, the craters on top of the mountain gave evidence that Mount Tampomas erupted some time ago, regardless of how big the volcanic eruption was.

Based on these sources, it seems that the legend of Mount Tampomas was first told between the tenth and sixteenth centuries.

The legend of mount Tampomas from Sumedang is just one of the many folklores from Sunda. Read them all to find your favorite :)