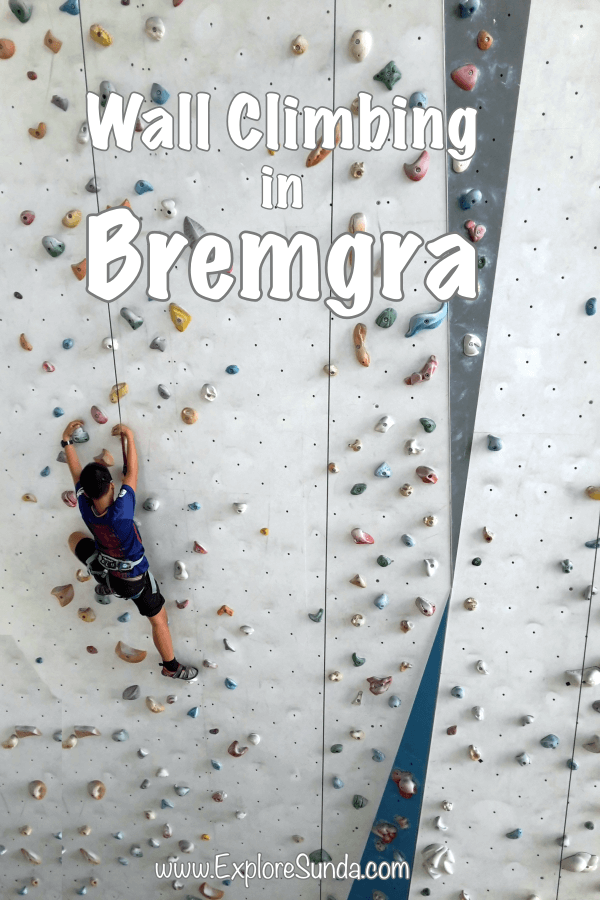 Wall climbing is often considered as an extreme outdoor sport, which we only saw in the movies. However, what would you say if it could be fun and safe? Would you consider to try  it? Who knows, you might become addicted to keep climbing the wall ;-)

Recently, wall climbing has become popular,  especially the indoor ones. Bremgra is one of the indoors.

There are four activities we can choose here: Rope Climbing Walls, Fun Wall, Ropes Course and Go-kart. They are all indoors. 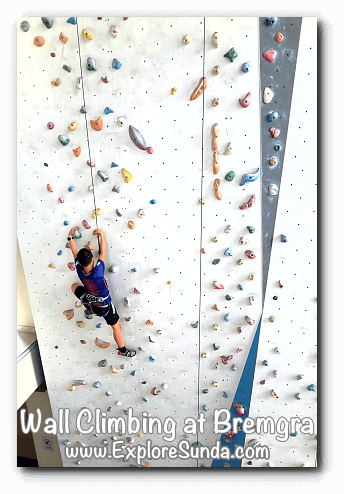 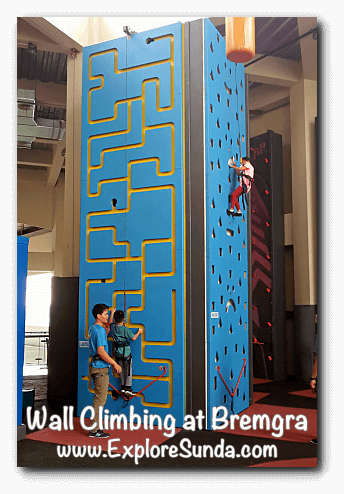 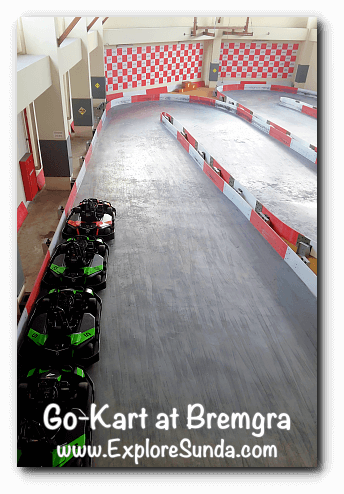 Bremgra is a three stories building, but the second and third floors are smaller, leaving an open area where we can see the wall climbing and the go-kart circuit.

The main area of the regular wall climbing consists of 150 routes, divided into several walls. The tallest wall is fourteen meters high, which reaches the third floor of the building. All of these walls includes slabs, vertical walls, steeper walls, overhang and Rocktopia simulated rock face.

Adults and children are allowed to play here, regardless of your prior experience. There are staffs stand by in the arena, ready to help you at all times. Each ticket lasts for an hour. If you keep on climbing, 1 hour is sufficient enough to exhaust you.

However, the beginners, especially children, will prefer the Fun Wall. Located on the second floor, it has many different types of things to be climb. First, the entrance is on the third floor: we slide through a twisted tunnel. I am not sure it's suitable for adults though.

Next, we put on our safety gear, the harness. The staff will help us put it on as well as to make sure they are put in the right place. Then, the fun begins.

There are several colorful walls we can climb here. Each with its own theme. For example, a fire truck complete with its ladder, faces of smiley, and the game of tetris. If we want to race, there are two identical walls called speed, each equipped with a timer. Hence, two players can race at the same time. The winner is the one with a shorter time. The timer can only be stopped by pushing the stop button at the top of the wall.

Another unique wall is called The Chimney. It has four walls and we are free to climb from any side or to cross to another side in order to reach the top.

Walls are not the only thing to be climbed here. There is a spider web made of rope. Two people can climb it in the same time. When we reach the top of the web, we can ring the cow bell hanging there :)

Next are scattered colorful cubes. We can stack them anyway we want. Then we climb them. Mind you, it is not that easy to stack light cubes and climb them.

Don't forget to try the Skyscraper Walk, which looks like a set of standing colorful cuboids. We should climb them to reach the tallest. However, their heights are not in order. The most difficult obstacle is to pass the shorter one in the middle. I saw one boy played there several times, in the end he was confident enough to stand on those towers and just jumped skipped the shorter tower! 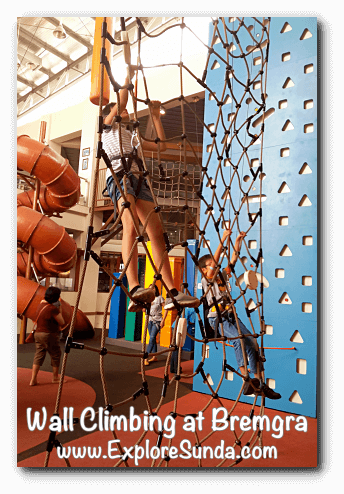 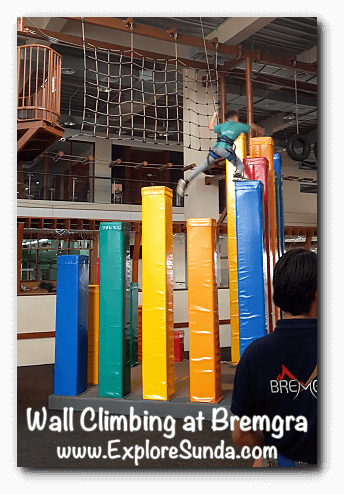 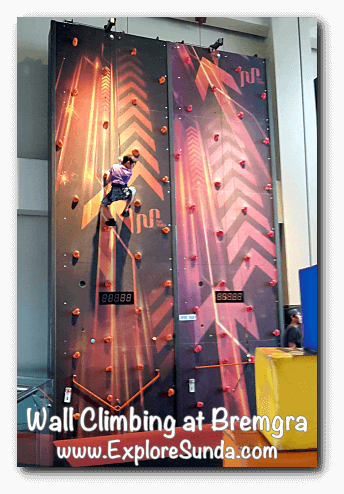 Each of these wall has its own security gear attached. In order to ensure safety, only the staff is allowed to put on and take it off from our harness.

The ultimate challenge stands in the middle of the ground. First, we climb a tower then we walk on the small platform on top of the tower. When we are ready, we jump to grab the object there. There are three objects hanging on the three sides of the tower: the trapeze handle, two loops, or a boxing sack. Once we have grabbed it, we need to let it go and we will slide to the ground using the safety rope.

Although the ticket is only for one hour, it is enough to cover the whole games here, even to repeat your favorite games for several times. Since adult and children can play here, parents can accompany their children to play, which of course will be more fun :) If you are not eager to play, you are still allowed to accompany your children inside the arena without playing. We can encourage them and document their achievements ;-)

Alternatively, we can watch them play while having snack in the cafe. If you are lucky, you can get the table next to the arena.

While the indoor climbing gym occupies the front of the building, the go-kart circuit is in the back. It is an indoor circuit, where we can also watch the race from upstairs.

All of the go-karts here are electric ones, hence, we don't have to worry about the exhaust fumes pollute the air. If you are interested, invite your friends to play together, because the go-karts are only rented to a group of 6 adults and you must book 3 days in advance. Each session lasts eight minutes.

Last but not least activity is the ropes course. It is a series of obstacle hanging above the second floor. I think the entrance is on the third floor. We walk through several bridges made of planks and ropes. There is a flying fox at the end of the obstacles.

After you have completed your work out (or should I say having fun?) on the walls, you can hang out in the cafe on the second floor. Even AEON mall is nearby if you want to a longer hang out. Are you looking for an alternative to Bremgra? How about Scientia Square Park, it is a park with a wall climbing in the outdoor plus other various activities such as in line skate, skateboard, etc. Or, how about ice skating in Bintaro Xchange? 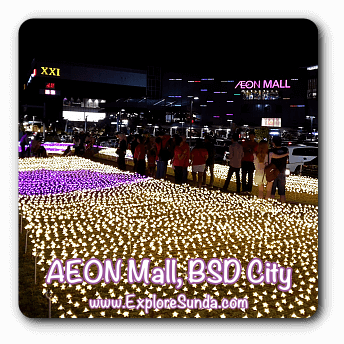 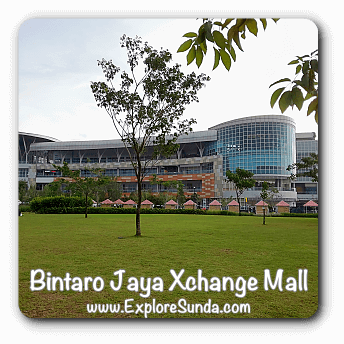